The New York Times flexed their considerable graphic muscles this week with some superb interactive charts showing how the population composition of U.S. States has changed over time. You can check them out here. 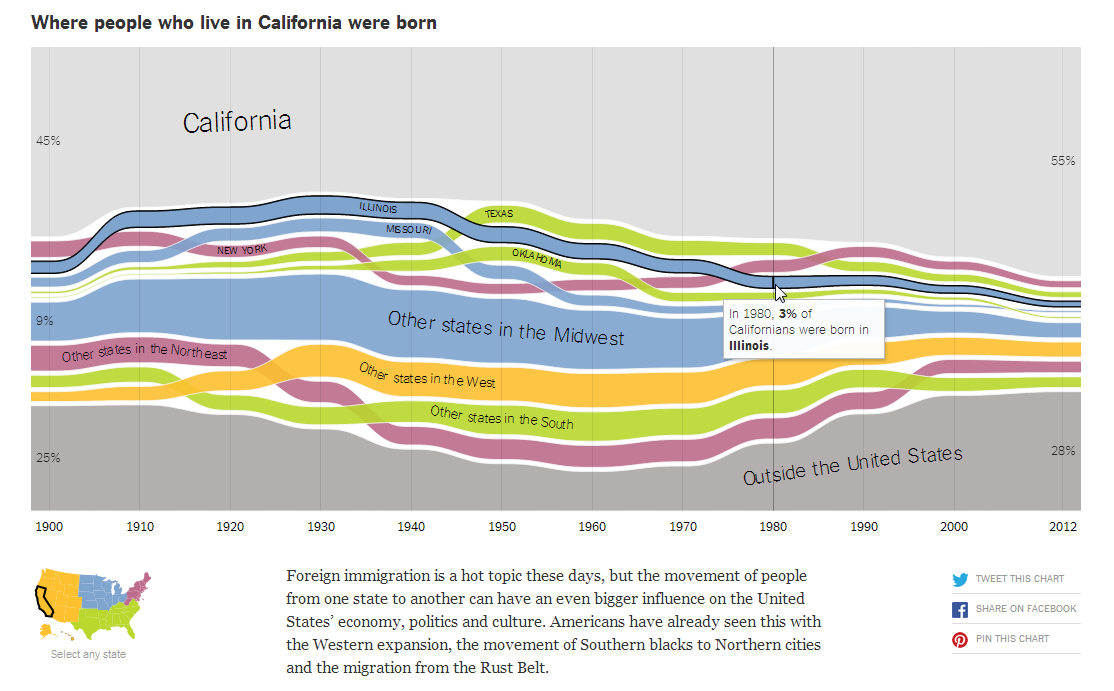 They really are beautiful graphs. Simple, clean, lots of 'white space', good hierarchy of typeography and excellent use of colour linking to a small map legend. They even provide some additional discussion and as you hover over the graph the intersection between time period and place gives you some basic metrics.

They then added to this excellent set of graphs with an interactive map of the same data; a new kind of map that they're calling a voronoi treemap map. 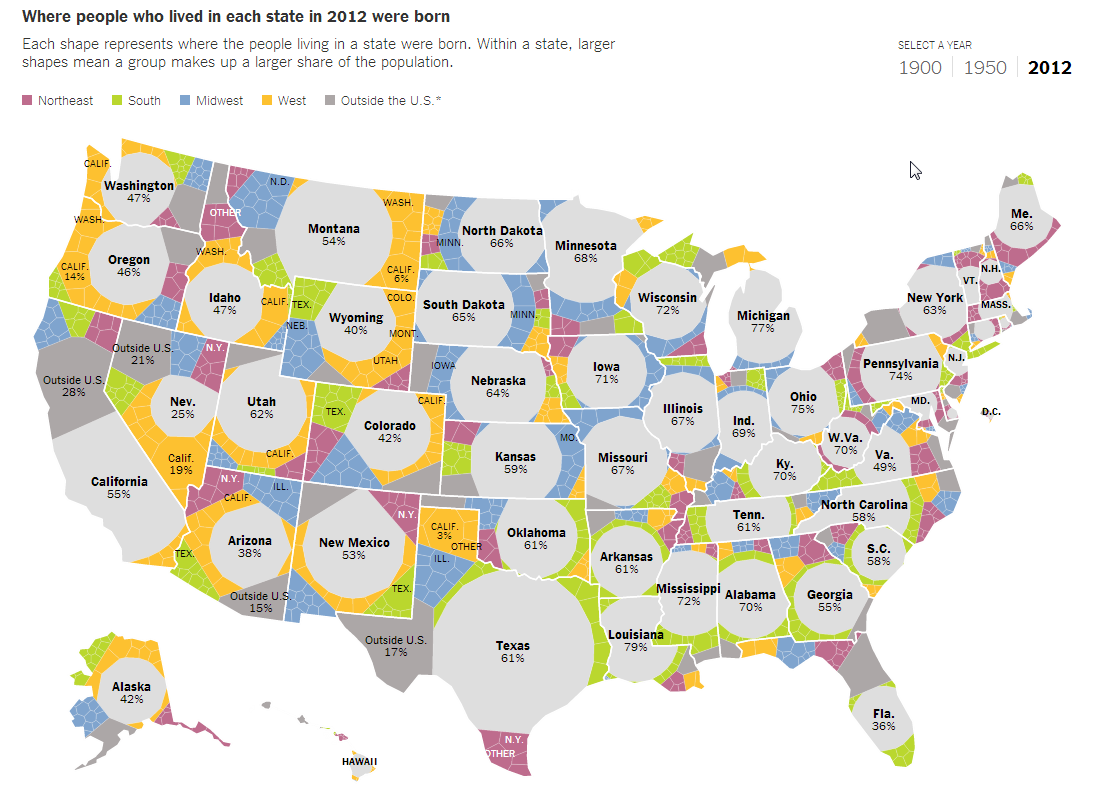 The data has been pivoted so the focus is on space in contrast to the focus being predominantly on time in the graphical representation. You can pick one of three time slices to explore how patterns vary spatially. The hovers still work extremely well and one click zooms to a state...great user interaction and experience. The benefits of looking at a map instead of the graph are that it should support the visual comparison from place to place. That's not something you can do with the graphs with each one only illustrating a single state...but what about the map?

What fascinated me about the map is the technique. The use of voronoi polygons to sub-divide space into a tesselation of shapes that represent different proportions is nothing new. Treemaps are also nothing new and have been used very successfully as a sort of area-based cartogram. Here, though, NYT have combined the techniques and used a bounding space (each State) inside of which space is tesselated based on the proportion of the population from different other places. It's not something I've seen before and it's always worth looking at experimental cartography.

I like the idea and I like the attempt at trying something new. However, I see two issues that I feel undermine the map and what it offers.

Firstly, the voronoi polygons are only proportional intra-state and not inter-state so you get polygons with the same percentages of populus that are visually quite different to polygons with the same value in another state (see Texas compared to Oklahoma state-born residents, both 61% but one visually dominates). The point about putting anything on a map is to create visual comparisons and the voronois are, effectively, unequal in area from state-to-state so incomparable visually. The relative areas of each state underpin what we see. Since we're visually comparing one place to another and forming a mental picture at first glance Texas would seem to have a larger number of State-born residents than Oklahoma. I'm not sure there's an easy solution unless you turn the voronois into a population-equalizing cartogram (e.g. the Gastner Newman) to account for the different sized areas. It'd certainly be interesting to see what happens if they were equalised by population or area.

My second observation is really just about the design and layout. In each state the surrounding voronoi fragments seem to be randomly positioned around the central voronoi polygon that represents the people born in-state. If you look at the small legend map on the graph version you see that the orange, green, blue and pink colours are used to suggest west, south-west, north and north-east. It would have been nice if the surrounding voronois were arranged so they sit on a compass direction to where the state actually exists. So for each state the oranges would always be on the left, the blues to the north etc. This may bring some sense of structure to the map and avoid the somewhat random positioning we currently see.

Overall I think there's a lot of merit in this new map technique but it probably needs some more thinking to make it really useful.