It's never been easy to create a taxonomy for maps but historically we used to be able to define a map by general function (general purpose, reference, thematic...), scale (small, medium, large...) or type (choropleth, dot density..) though clearly any single map can fall into multiple categories.

This diagram (from a cartographic text book...yes, they do exist and are quite useful) used to provide quite a neat illustration of how we might categorize types of maps but does it still work for the multitude of new forms of map, new map-makers and new mapping techniques?

Online has brought about a new wave of technological revolution in cartography (just as the printing press and computing more generally have done in the past) but are maps online that different?  Aren't they just maps? I'm convinced some of the newer terms are unnecessary when perfectly good terms already exist but progress in anything is often accompanied by a shift in terminology that is designed to encourage uptake and adoption. But is that terminology actually offering anything new? Is the product so different it demands a new label?

I've had a long standing side-project to collect the labels we confer on maps with the idea that I can create some sort of simple modern taxonomy, consign pointless terms to oblivion and focus on what's really important. Below is a list of words/terms/labels that we often see used to describe a map or which are used in conjunction with the word 'map' that I've so far collected. It's a mix of traditional, common use and vendor-specific terminology.

Can you help? Please feel free to add comments below (or send me a tweet @kennethfield) to add to the list or offer your definitions. Alternatively, if you know of other attempts to categorize maps then please let me know. Thanks in advance! 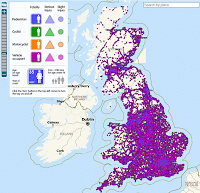 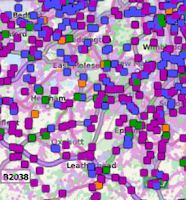 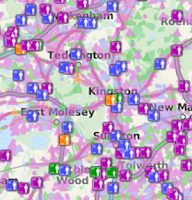 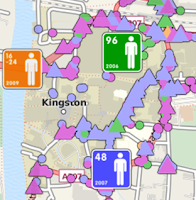 
I've never been able to zoom in further than level 15 since it fails to draw any symbols beyond that scale but what can we take from this map in terms of its cartography? The importance of designing for specific scales cannot be underestimated. Putting a mass of points on a map simply doesn't work at most if not all scales. At smaller scales, data needs manipulating so it is in a form suited to a small scale thematic map type. At larger scales, symbols need to be simple and clear. That said, I like the map for one simple reason...it's one of the first I have seen that has attempted to show a very complex data set by type rather than the use of a single coloured generic marker symbol. At larger scales the symbol design is generally good and gives a mechanism to visually disentangle incidents by type, transport, age, date and gender. It's doing what cartography was designed to do..allow the map maker to take complex data and classify, symbolize and provide a picture so patterns can be seen that goes beyond what a table, graph or uniform point marker web map can provide. It's not perfect as I've pointed out but it's pleasing to see web maps begin to show signs of cartographic thinking and design.
Posted by Kenneth Field at 09:02 4 comments: 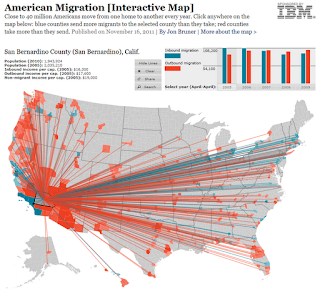 So all in all it looks nice but actually offers very little and challenges the map reader to make any sensible interpretation.
Posted by Kenneth Field at 15:56 1 comment: 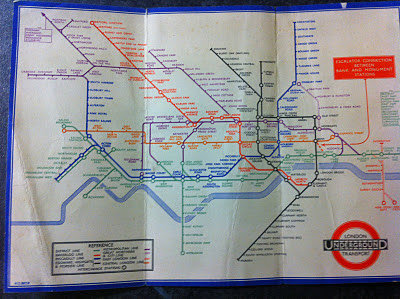 Now...where can I find that elusive First Edition?...(if anyone has one they want to sell, feel free to contact me!)
Posted by Kenneth Field at 17:05 No comments:

When is a map not a map?

I recently came across a map (in the loosest sense of the word) a former student of mine once submitted in his/her final year undergraduate BSc Geography dissertation. It was so bad I took a picture for posterity. I can't recall the culprit's name but they studied at Nene College (now University of Northampton) sometime around 1996. There is no need for a commentary, just enjoy...and feel free to comment!