Sorry to hear you're not a fan of the map!

This morning's social media detritus included an interesting link to a couple of maps on the eSpatial blog cataloging U2's history of live performances.

Nice idea, I thought. Then to the maps. Well, the first is pure 'stick the pin on a Google map'. It locates where concerts have been played during the band's history. It's just a basic mashup and there's really not much more to be said. The second, though, is worthy of further comment. I tweeted that it was a 'terrible, terrible, awful map' and received the following reply:

Being a cartonerd that response was a little like a red rag to a bull. They could have come back with "what's wrong with it", "how could we improve it" or even "is it really that bad?". But no, instead criticism is deflected as some sort of characteristic of my own failings rather than the map. SO here's the map: 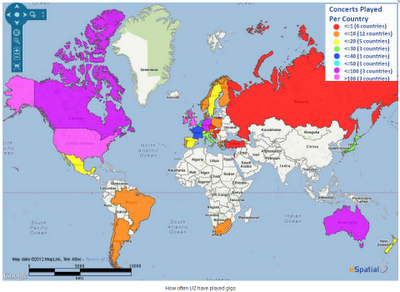 And here's why it's "terrible, terrible, awful":

The basemap is inappropriate for continuous surfaces like this. Even with transparency there's far too much clutter from the unnecessary topography beneath. Labels are partially or fully obscured.

The map is essentially a choropleth but yet maps totals...see any number of other posts (1, 2) on this blog for why that simply doesn't work.

The projection is inappropriate...OK, I entirely accept that it's Web Mercator and we're kinda stuck with it for this type of web map but that said, it's even more imperative to take account of differences between areas and map the data as proportions, not totals.

As for colours, well, it's a long time since I saw Russia mapped in red like that on a Mercator projection. Wow! look at all the gigs they played in Russia, oh wait...<= 1. Hang on...less than 1? Could this be a famous half gig? I presume it's one per country. Back to the colours...the map is unreadable. presumably we want to see at a glance where they played more and where they played less? Well this colour scheme doesn't support that user experience. Look at Canada vs the USA...surely Canada had more gigs according to the colours. No, not according to the legend. So it needs a single hue progression or similar so that we see 'more' and 'less' appropriately. Want to see a better version? Check out the map on Setlist.fm: 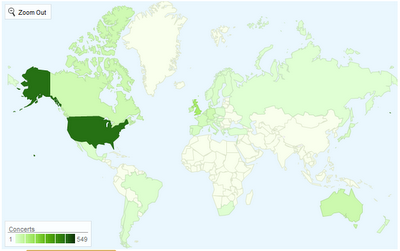 It's not perfect...same old Web Mercator, they also suffer from mapping totals and don't classify their data effectively so there is little differentiation between countries BUT they use a decluttered basemap and a decent colour scheme. See how much more useful and pleasant to look at it is! Added bonus...it's a web map, not a screen dump, so you can mouse over the countries and get the actual totals.

What they have done is given me the spark of an idea for a map though...it goes on the list.

Postscript: Ryan Robitall (@acotgreave) got in touch and pointed me to his site where he's created a Tour Dashboard and a way of mapping shows in your country to visualize Metallica's tour history. A much better effort all round (though unclear if the choropleth is using totals?). Informative, clean, well structured and useful. Thankfully there are people out there designing good ways to view this sort of data. I can relax again!
Posted by Kenneth Field at 08:19 4 comments: