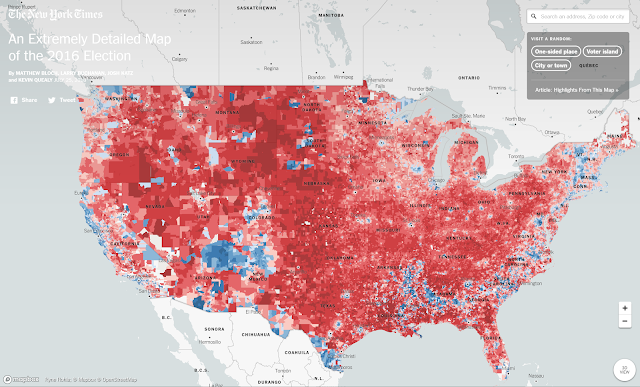 And thus, my Twitter feed went into a late night tail spin as I saw, in equal measure, exasperated cartographers bemoaning the map and political commentators and everyone else and their dog exclaiming it's sheer wonder. I offered a few comments which drew plenty of agreement, but which also had others telling me that the map wasn't made for master cartographers etc etc. No, Nate Cohn, the map is not 'as I've never seen it before'. It's not 'amazing' or 'Incredible'. No, James Fallows, the map is not 'great'. Such hyperbole simply reinforces people's beliefs because they take their lead from the sort of comments you make. Who cares what a few expert cartographers might have to say on the topic...you know, those people who are actually qualified and experienced in ways that make their perspective worthy.

So what's my beef? First off, the map is not 'wrong'. The data is more detailed than many others (including virtually all I made) by being at the precinct level and not the county, or state level. So you have smaller geographical areas. Detailed, yes. Accurate, certainly. Useful? Absolutely not because of the way the map was made. The very fact that it's made for a public not versed in cartographic wizardry is precisely why maps like this need strong cartographic editorial control. The general public is drawn in by the headline, they are told detail matters and they infer that the map must be bloody great because they are told it is.

It's a straight-up choropleth showing share of vote. Darker shades of red for a higher Republican share and Darker shades of blue for higher Democrat share. It uses a standard diverging colour scheme. Again, not fundamentally 'wrong' but the choice of map type and symbol type lead to a very particular map. A map that, visually, over-emphasizes geography.

You see, there are hundreds of small areas on the map with ridiculously low population counts which are given equal (and sometimes greater) visual prominence as other far more densely populated areas. An area that has 100 voters and 90 of them voted Republican is shown as dark red and a 90% share. Exactly the same symbol would be used for an area that has 100,000 voters, 90,000 of whom voted Republican. The differences between the number of people who live, work, and vote in each area is fundamental to the impact the resulting map has on our senses because we end up seeing a shit load of red. That much red distorts our perception of the result. It exaggerates the election results by persuading our eyes that more red equals more votes and a larger winning margin. That simply isn't true. Many small areas with a lot of people carry far more importance, electorally, than many large areas that have small population counts. And so, the map misleads, it reflects more of the geography of the country than it does of the people of the country. That huge swathe of red down the middle of the country is not a huge crowd of Trump voters, distributed as evenly as people on the two coasts, but simply where sparsely scattered people preferred Trump's pitch.

The very same data was far more eloquently mapped by The Washington Post back in September of 2017. 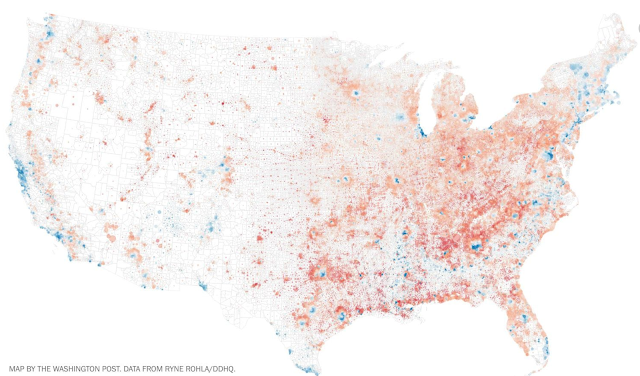 This map takes the very same data yet is designed to ameliorate the form. It considers the underlying problems of its distribution and the geographies it is bound by. It then reflects on how best to show the same data in a way that a person needs not to have a degree in cartography or electoral geography to disentangle the reality form the mapped form. In short, they thought about how to rid the map of misleading symbols and present a more truthful version. This, is good cartography. Where a cartographer has actively considered the impact of his or her design choices on the map, the message imbued in their choices, and the way the map will be perceived and cognitively processed.

The Washington Post map scales point symbols and uses subtle transparency shifts to take account of geographical and population distribution disparities. Same data. Fantastic map. Still plenty of red but, now, in visual balance with the rest of the map. And comparisons are what maps like this are all about. We see one place and we visually compare with another. That's how we assess our understanding of spatial patterns and the simple processing of where there is less compared with more.

Back to the NYT map for a moment because there are other problems that I honestly cannot believe we're still talking about. The map uses Web Mercator as its projection. This is flat out wrong for a map where you want, sorry, NEED, equal area to be maintained. Just dumping the map across a Web Mercator basemap is downright lazy. Alaska... 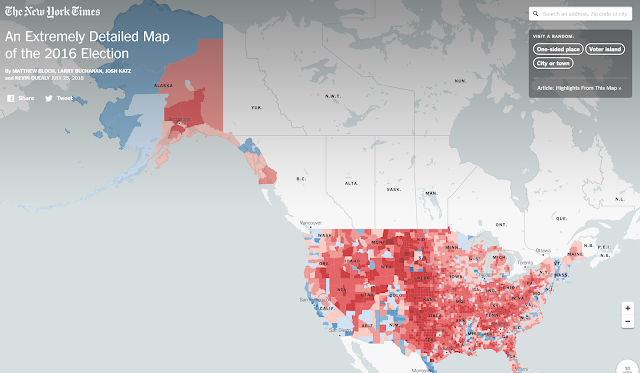 And the 3D view...holy crap map. It flips the map to an oblique angle but the map is flat. Flat as a bloody pancake. There's nothing 3D about it whatsoever. A gimmick. A pointless, and mis-labelled gimmick that ends up distorting the relative coverage of colour even more. Foreground gets visual prominence. Background recedes. 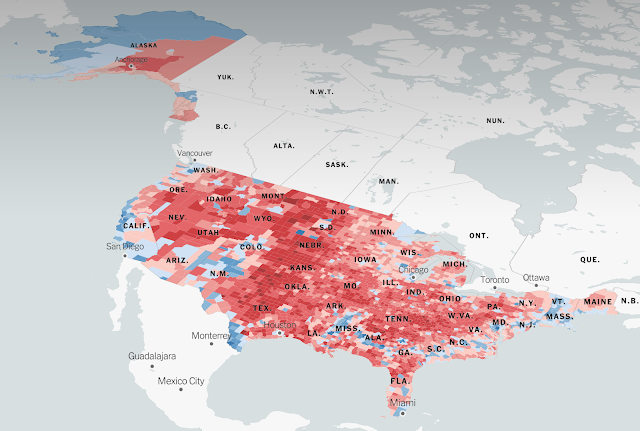 So there we have it, the latest election map. Not the best by any stretch but another clear demonstration of the vital role cartographers have in educating people to understand that what they are seeing is as much a function of the choices in map design (and laziness in not doing anything to prepare or display the data) than it is the actual data. Making maps for mass public consumption demands good cartography, not technical gimmicks. It demands you reflect on what the map will tell people through your design choices. Cartography mediates understanding. The lens of the map-maker is fundamental to how we see the world. If you choose, actively, or through ignorance, not to bother with cartography then your map is doing your viewers a huge disservice and reinforces the already pathetically poor appreciation of geography that exists in society. Think about it. Do better, and end the nonsensical cartographic hyperbole that this sort of map crap feeds.

I'll end with this...Nate Cohn trolling any and all of us who make comments on the problems of the default choropleth.