I've always been intrigued by the potential for 3D in thematic cartography but it is that much harder to get 'right' than 2D...and look at what a mess many get in when trying to make even the most basic of 2D maps.

We see the world in three dimensions because we were given two eyes and stereoscopic vision. That gives us depth perception. In making maps on a flat surface (paper/screen) to mimic how we see the world we have to go beyond our basic palette of visual variables and symbol encoding and play with additional variables. We have to make the eyes see the third dimension.

The standard way of achieving that is to make the map in a perspective view...near things are closer to the eye than further away things. We can accentuate this by perhaps adding a sky in the background (to mimic a far off horizon) or add in haze to diminish objects further away in the same way as haze affects our view in reality. This generally works well for maps of the natural world....mountainscapes and street scenes for instance.

But this approach doesn't apply equally for thematics because the principle objective is to create a consistent view to support comparisons across the map. The perspective view does not support that cognitive need. 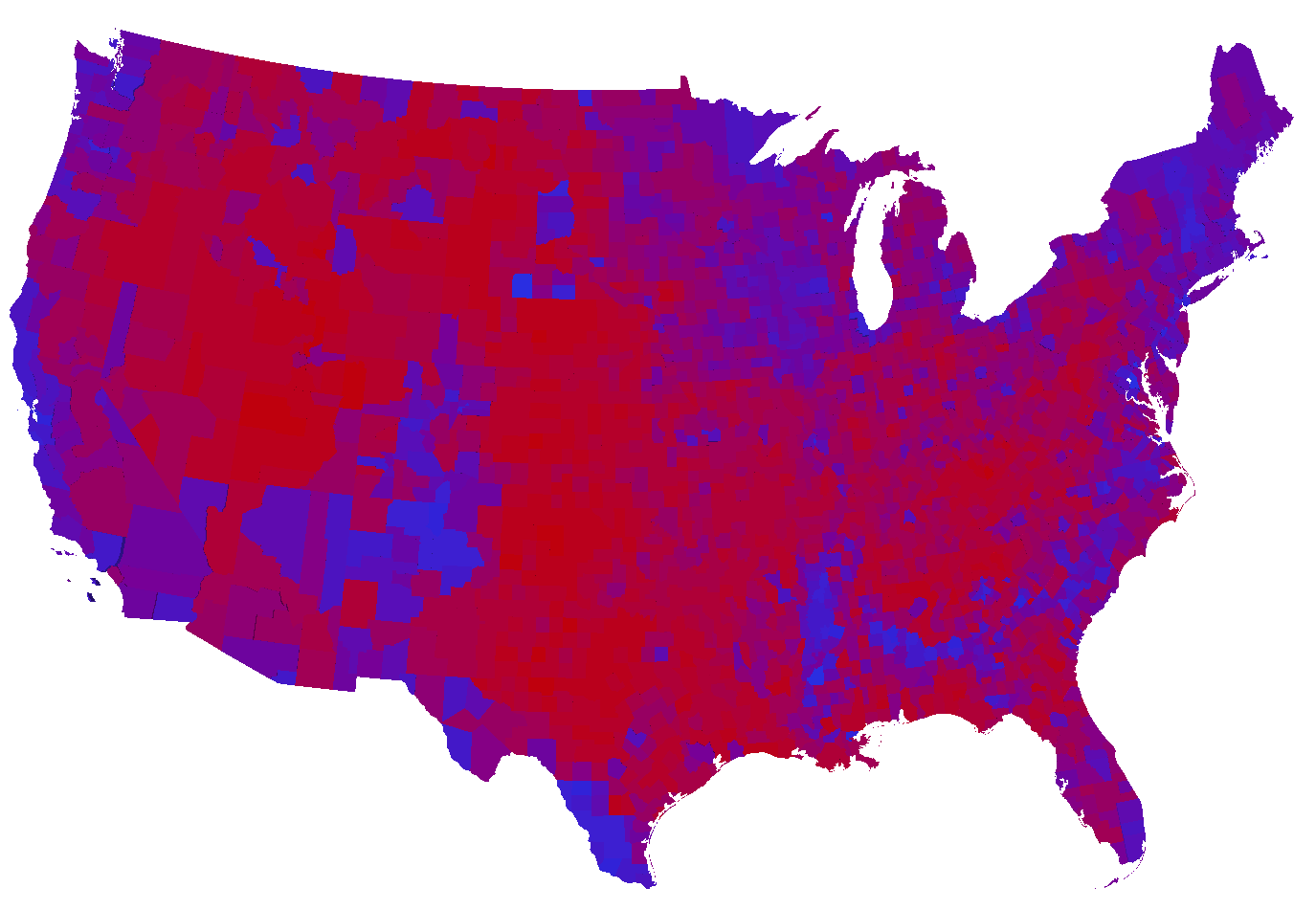 What the map doesn't show us is how many voters there are in each county which might help us better understand the reason Obama won...so let's whip it into 3D and use extruded areas to show the number of voters. 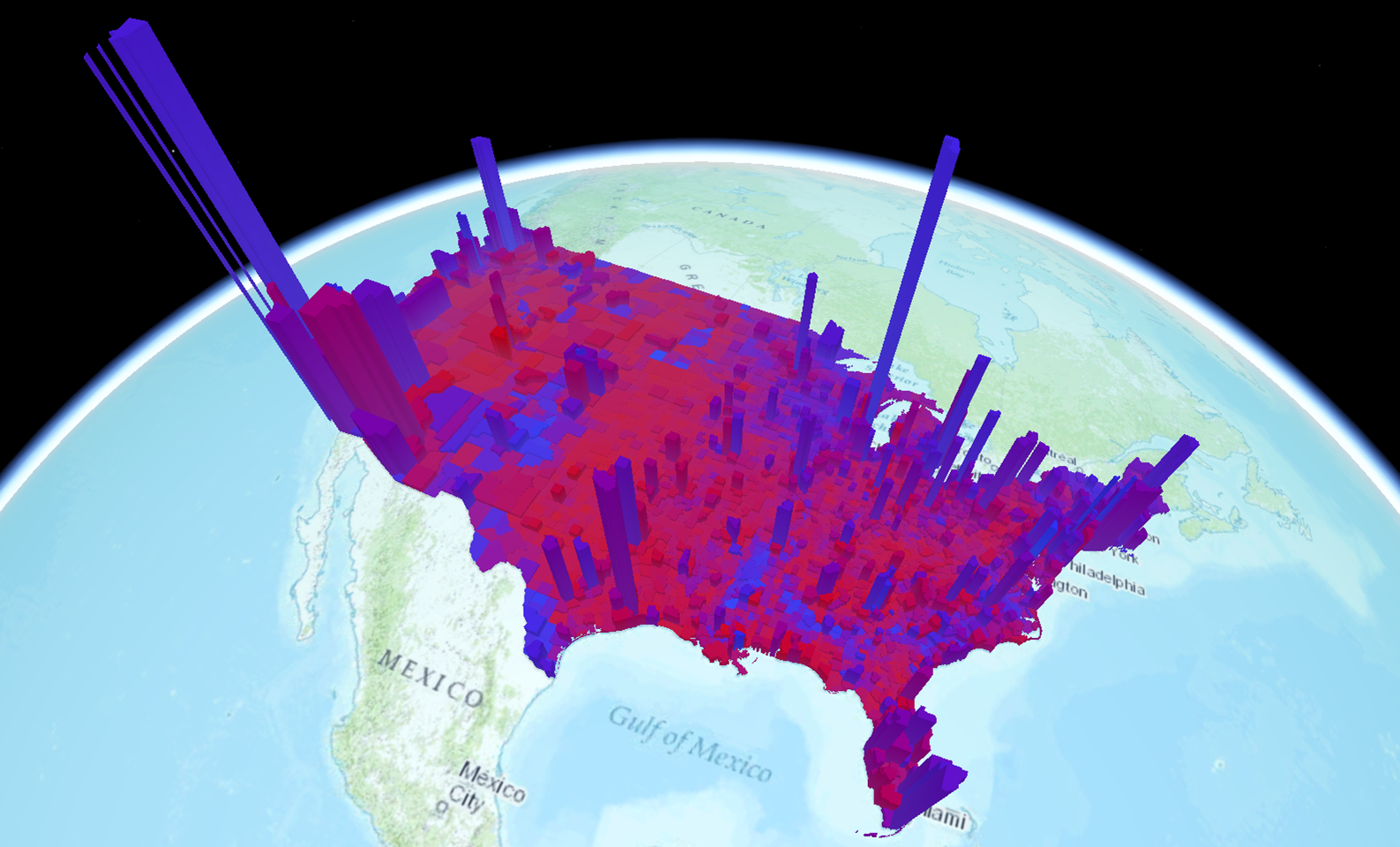 Simply placing the choropleth on a virtual globe and extruding areas is a very common approach to 3D thematic mapping but it's bloody awful!

The perspective view seriously compromises our ability to compare the height of our extrusions like-for-like. The foreground is nearer the eye than the background. Worse, the curvature on a virtual globe alters the shapes as well so we're seeing all sorts of distortions that our brains have no hope of disentangling. The “fish eye lens” effect mean each prism is viewed from a different angle than its neighbors, making comparison just a little bit harder as we have to mentally account for these differences in our estimates. It's hard to judge the height of something when you are staring directly down at it too...look at those areas in Florida. This matters because height is the visual variable that does the “work” in this map—it’s how the data are encoded visually.

Here are a couple of other examples that make the same mistake. First up, capacity by energy source in the US: 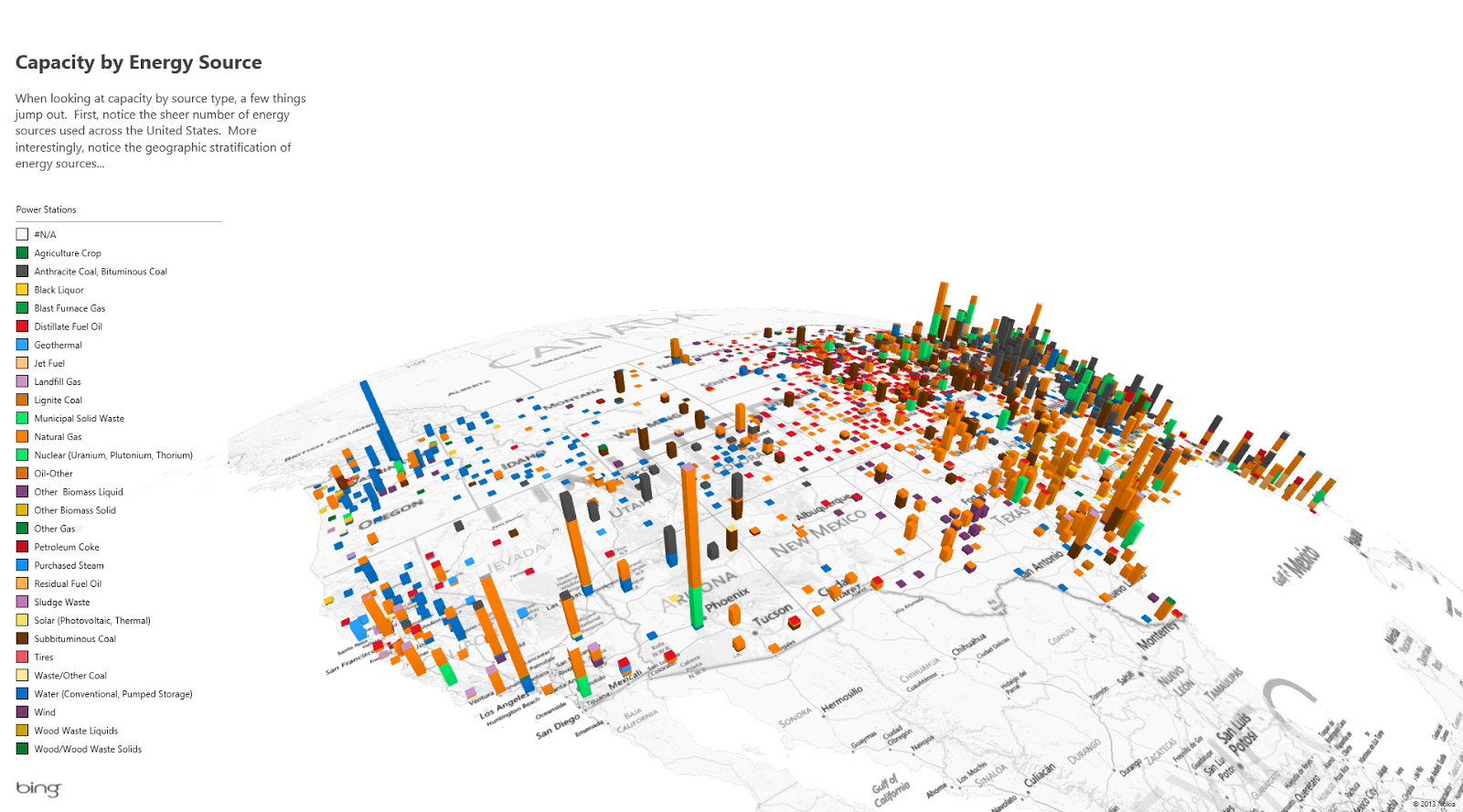 The map tells us (yes, it does...in the blurb at the top) that we're seeing a clear stratification of energy sources across the US. Are we? I just see a map whose visual centre is focused on the sparse areas in the middle (the least interesting datawise) and a load of 3D columns of various colours fading off and disappearing over the horizon. It's like the data is running away, off the edge of the map, scared to be party to the horrific map it's been placed on.

In this example, 3D kills the map. The intent to 'look cool' by using a curved virtual globe destroys any hope of the reader being able to see any patterns. Look at the large orange bar in Arizona toward the front...is it taller or shorter than the one you see poking out above the skyline in the north-east? Who knows...but I bet they're about the same value. And stacking colours on top of one another makes the top colours more prominent anyway. Who knows what's hidden from view in the east. And finally, what of the colours...nearly 30 of them. The map reader has no hope of figuring out the difference between distillate fuel oil and petroleum gas...or geothermal and purchased steam.

Another I saw recently appeared on a T-Mobile advert: 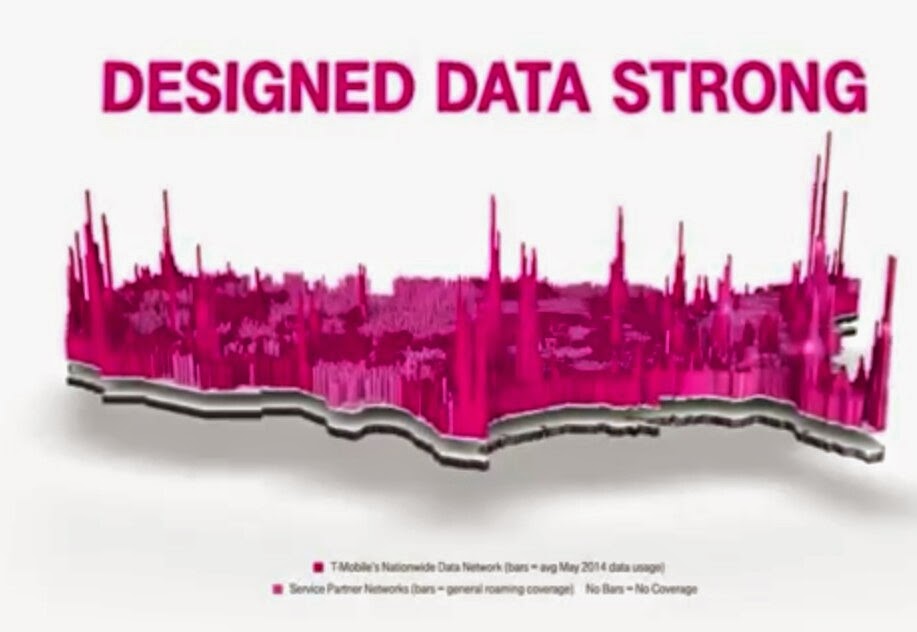 The title is meaningless. The legend shows us T-Mobile's data network usage in the slightly darker pink among their partner networks in slightly lighter pink. OK - it's an advert. The point is to show complete nationwide coverage and they wanted something a little more visually striking than a choropleth so...threedee it! Except compacting the map by putting it on its side and tilting it so dramatically makes it impossible to see where all those columns actually sit. And what's the vertical scale? It seems that the base height is actually extruded a fair bit to give the impression that perhaps even a small usage/coverage is a little larger than it might actually be. The map is designed to obfuscate reality because it's an advert...but if we wanted to make sense of the actual distribution the 3D approach kills it.

And here's an example from Andrew Hill which you really have to see as the web map here to fully appreciate its full three dee gory glory: 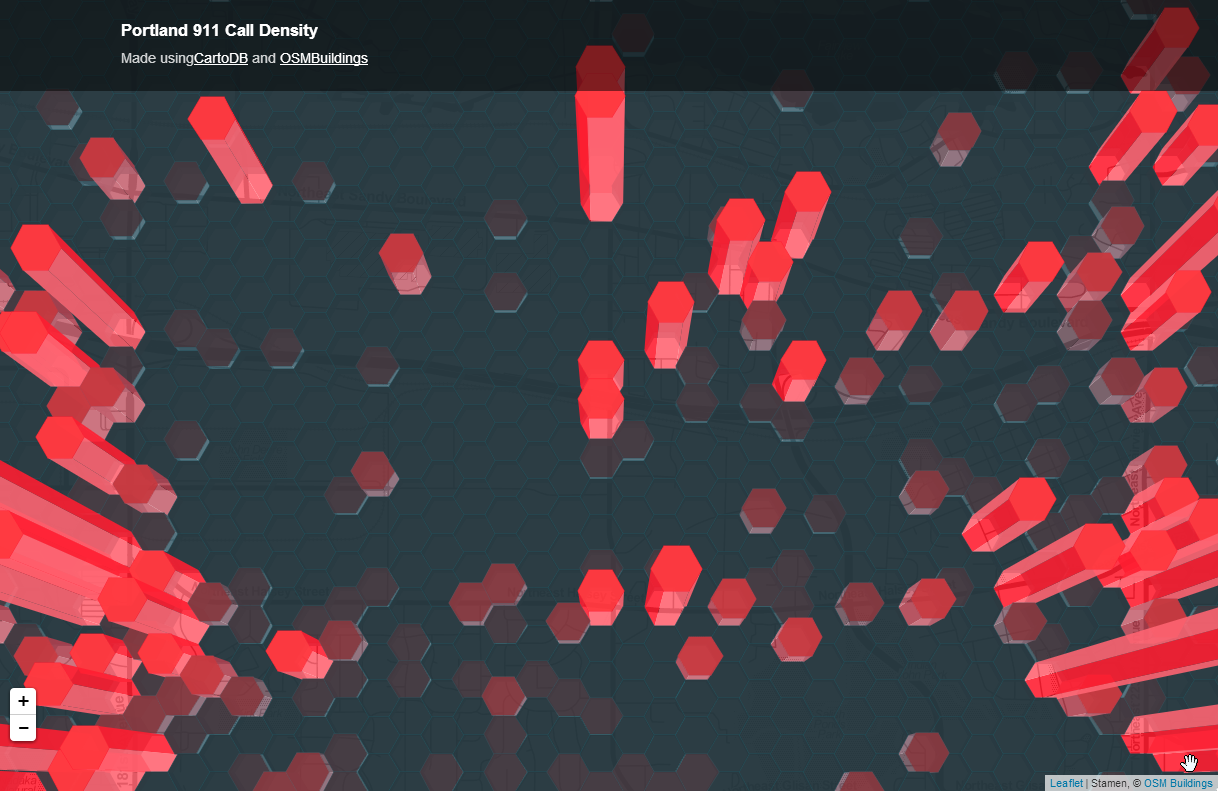 Andrew does some great work and pushes what technology allows. He also brings a fresh perspective on making maps that pushes the boundaries and challenges long-held principles. That's great in many ways but there also has to be a sense of understanding when the outcome doesn't stack up cognitively.

The hexagons have been used to bin the point data (911 calls) and height of the prism relates to quantity. All well and good to this point...but try and compare height relative to an absolute vale or relative to one another and you quickly become disoriented. Technically this is cool, no doubt. Cartographically it's questionable...very questionable, because it doesn't support the necessary cognitive processing needed to understand the pattern.

So can we make better 3D thematic maps? Yes. You simply need to use an isometric projection which distorts the plane on which your map sits to make the scale equivalent across the whole map. Here's the election data on an isometric base: 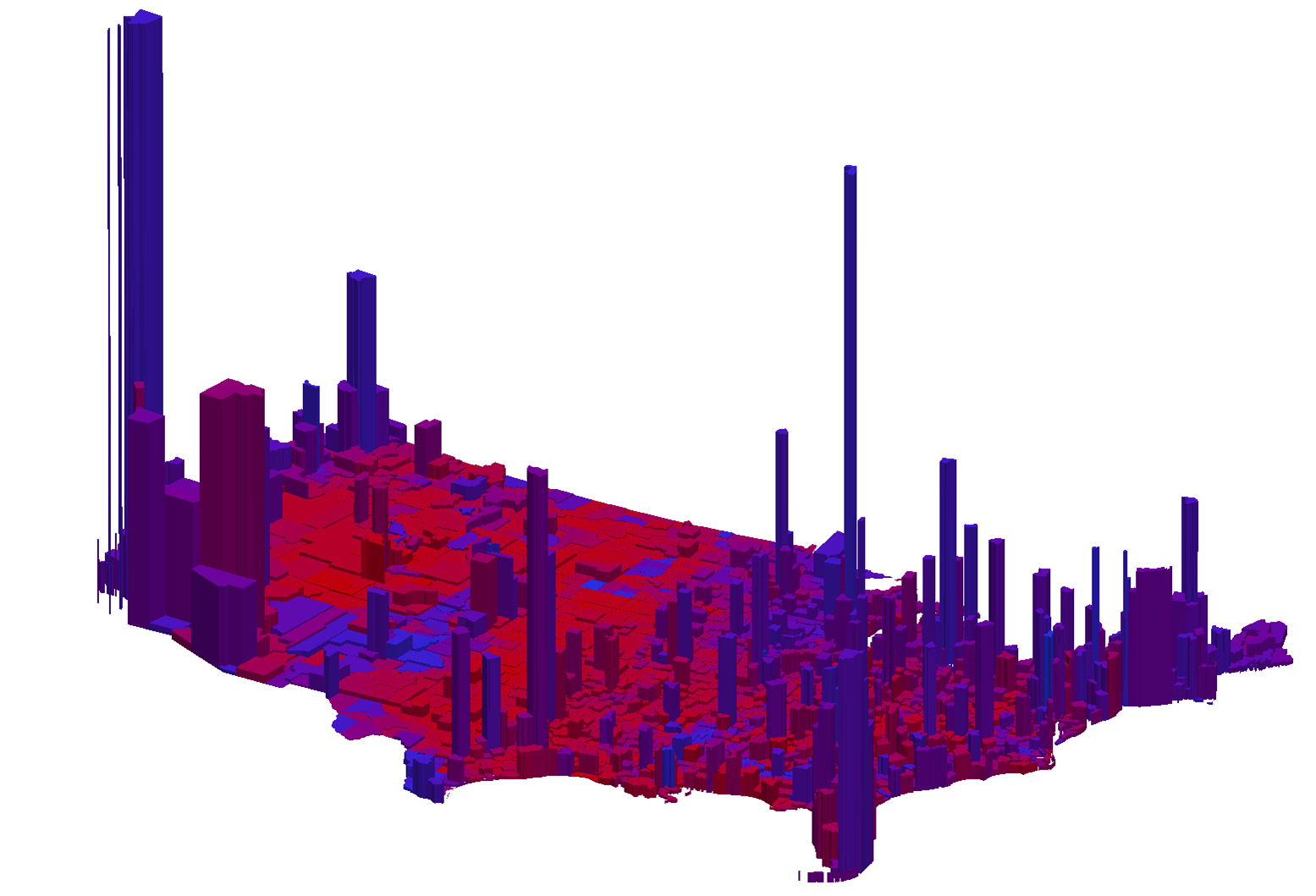 Now unless you're going to provide the ability to rotate and interact with the map, you're going to still suffer the problems of occluded data but at least here each column is in the correct relative proportion to one another. We can accurately compare heights across the map and make sensible inferences. The interactive version is here which supports rotate, pan and zoom...though be warned that another difficulty with interactive maps is the constant ability to rotate, pan and zoom means we lose track of our visual anchors and this generates short-term memory flushing. In other words...you easily forget what you just saw and that means you lose the ability to build a comparative picture.


There we go...some thoughts on threedee thematics. In short...stick to 2D unless you're prepared to go the extra distance to deal with the additional problems 3D creates.
Posted by Kenneth Field at 10:17