2016 hasn't been the best year. Tinged with the sadness of so many iconic people checking out before having to face the political turmoil ahead, the number of 'best maps of the year' blogs has also diminished. Greg Miller has already posted his Best Maps of 2016 on the National Geographic blog and we share quite a few in common. Is that consensus? Or possibly the cream of the crop are that much more distinct from the rest? What of others? Is blogging really dead because no-one wants to read anything beyond 140 characters any more? I'll just put these here to log my personal favourites from the year.

I wrote last year that I felt the quality of cartography was improving and I see a shift in the balance in quantity of poor maps vs good maps. I think the pace of that shift may have slowed a little but it's still on course. As people's recognition of weak maps becomes more atuned; and their tolerance for meager offerings becomes lessened, it's harder to throw something into the ether and make it stick. That translates to the map-making process where greater care is taken not only in the analysis and accuracy of the data but also the artistic representation. Whether digital or hand drawn, there's certainly more aesthetically pleasing maps being made.

So, in no particular order here's some of my favourites:

The Two Americas by Tim Wallace at New York Times
The Presidential election brought out numerous thematic maps but Tim Wallace stole the show by transforming the electoral geographies into two pseudo imaginary landscapes complete with new labels. They're really just red and blue maps, one for Trump and one for Clinton, each showing the territory of the two candidate's winning counties but it shows how a cartographic imagination can transform a map into something completely new. 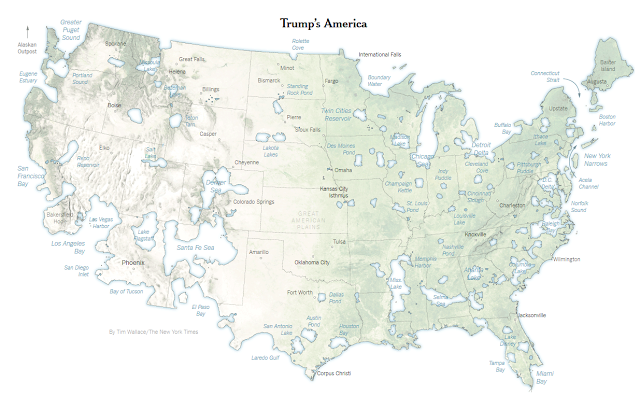 Shan Shui in the World by Shi Weili
A traditional shanshui Japanese painting produced computationally. A beautiful piece of work that demonstrates how cartographies of the past can be re-imagined using modern workflows to go beyond what we think is possible. It's based on building height data for Manhattan Island. Stick it on the wall....that's all! 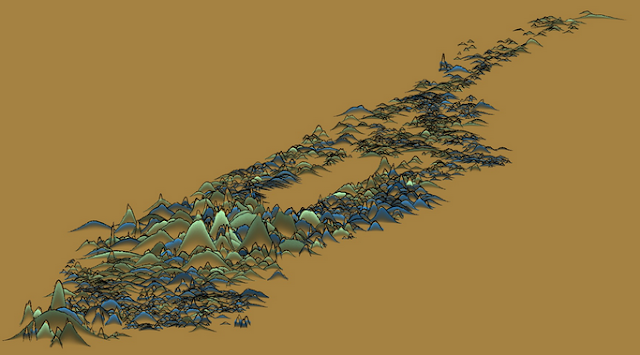 Modern London in the style of John Rocque's 1746 map by Mike Hall
I continue to be impressed by the work of Mike Hall. This is a work in progress for a private client but shows how working in only two-colours can be so sweet! Mike has also done some great single colour retro maps this year which are also worth a mention, 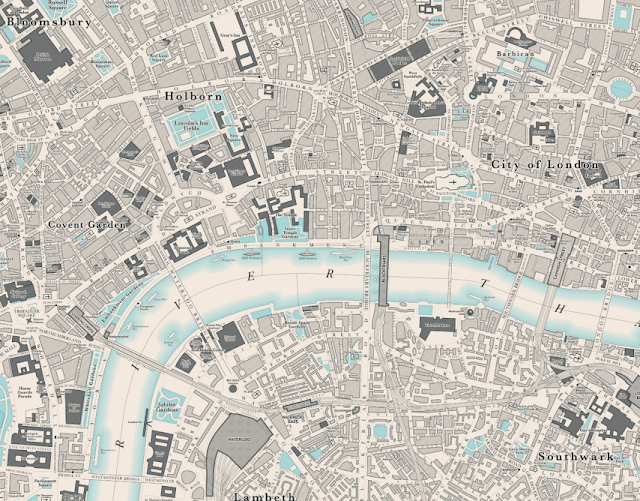 The North American Continent by Anton Thomas
It's not even finished yet but this is a stunning large format hand drawn pictorial map. The detail is exquisite. It's painstaking work but the result is pure cartographic gold. I love the way Anton drew in the labels first then fitted the detail in around those key items - the reverse of how many make maps. 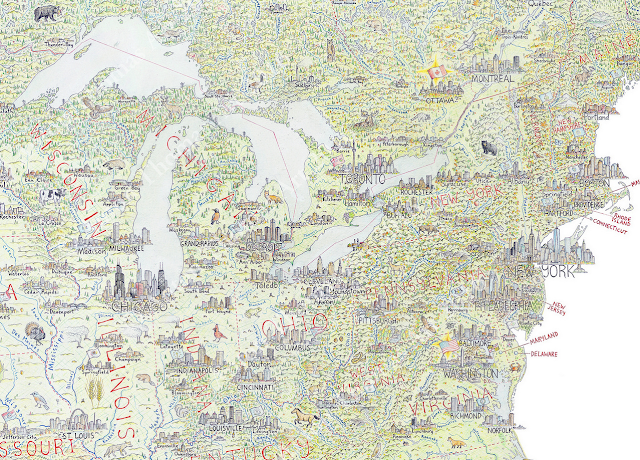 Transportation Clusters by Martin Grandjean
A force-directed layout of the airline transport infrastructure. If the geography doesn't work to display the data, make the data work to display the geography. It makes much more sense to escape the grip of real geographies for so many datasets and this example works well. The colours and layout add to the overall composition. 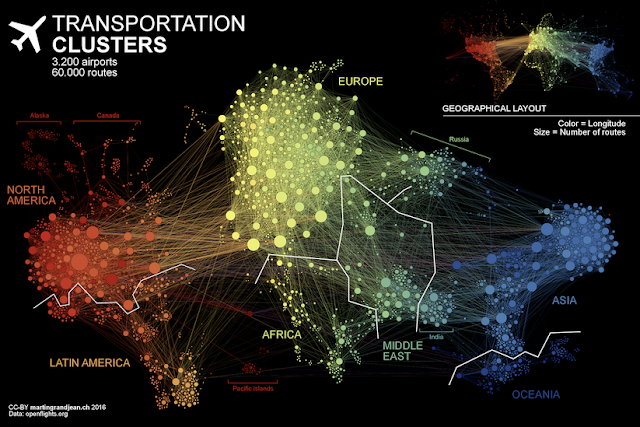 Attention all Shipping by Jane Tomlinson
How do you make the BBC shipping forecast visually interesting? Paint it! The British obsession with weather is encapsulated with the daily shipping forecast and the strangely named areas at sea which it references. Tomlinson refers to it as visual poetry which may even be a new form of cartographic sub-genre. Either way, a beautiful map of an otherwise mundane subject. 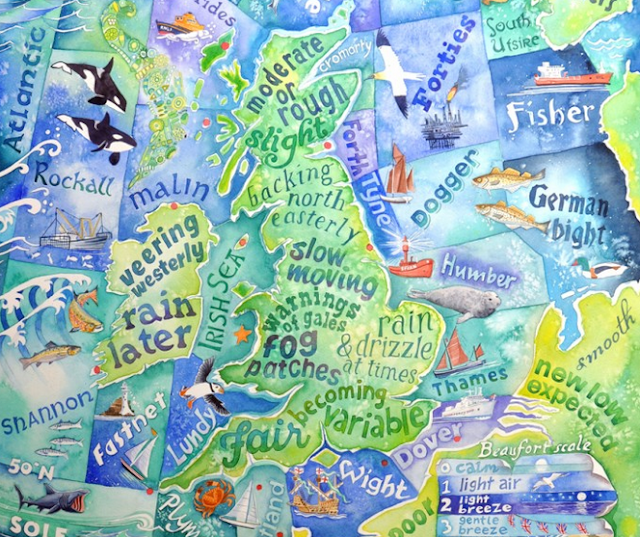 Hiking in the Grand Canyon by Charles Preppernau at National Geographic
Scrolly story maps have become popular this year. This example is perhaps the pinnacle of the genre, skillfully merging fantastic photography, video, text and other multimedia components with superb cartography. But it doesn't end there. The maps are windows and they're used creatively with transitions, pans, zooms and fades that bring focus. The changing of the map's base to show winter snowfall is genius. 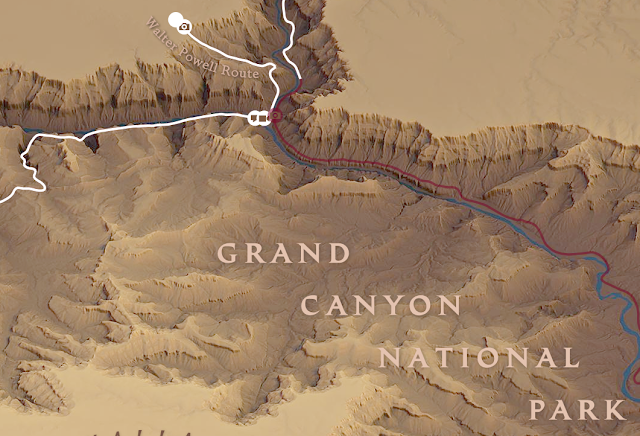 Paths of Amity by Andrew DeGraff
I'm not even sure Andrew drew this one in 2016 but I came across his work in 2016 and it's stunning. His movie maps series plots the paths of the key actors and story for different films. I picked his Jaws map here but, equally his maps of Star Wars and others are just as good. He builds the film's locations as a single uninterrupted backdrop then plots colour-coded lines throughout the map. Simple idea, beautifully drawn. More here. 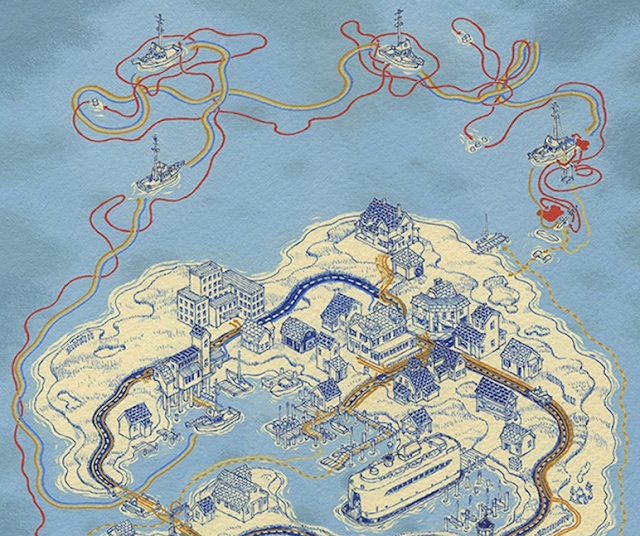 Here There be Robots by Eleanor Lutz
There were several maps of Mars in 2016 but, for me, this hand drawn map was the best. It has an antique quality with clever use of colour and, in particular, the relief depiction. Colours change as the relief changes at key contour lines which makes it appear a little like a carved woodcut. The various adornments such as the measured graticule, rhumb lines and hand-written style fonts add to the effect. 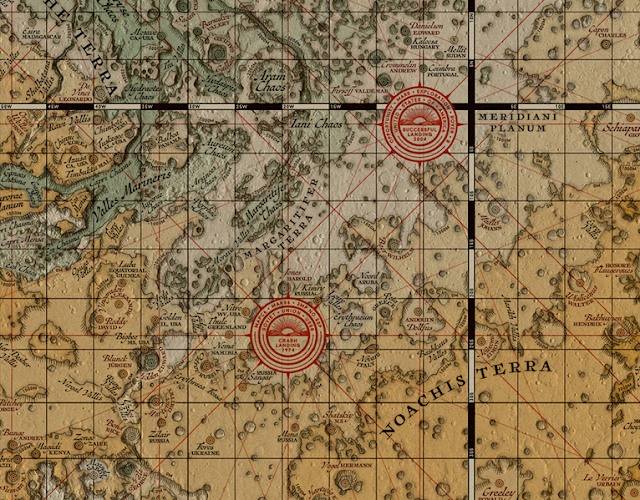 National maps for Switzerland by Swisstopo
The national maps of Switzerland have always been at the pinnacle of national map agency cartography. Swisstopo have updated their topographic map series and they've somehow managed to improved on them. Clarity, composition, colour, typography and beautiful landform representation work in perfect harmony at each scale and acrsoss the scales. There's a splash more colour and a little more sans serif but they're unmistakably Swiss. 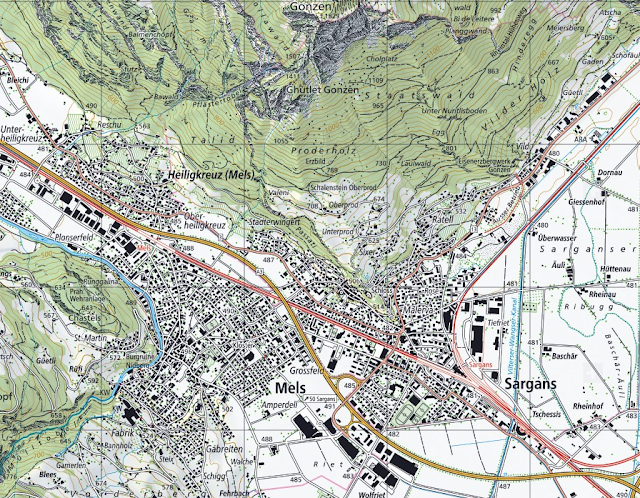 FaVVEs by Roger Beecham et al.
Small multiples are a great way to juxtapose different aspects of a related dataset. Here, the idea has been developed to show faceted views - multiple perspective small multiples that allow more than one variable to be viewed concurrently. Symbol and cognitive overload are often the cartographic enemy but this research shows that it is possible to develop new ways of seeing that make sense, work well and look good! 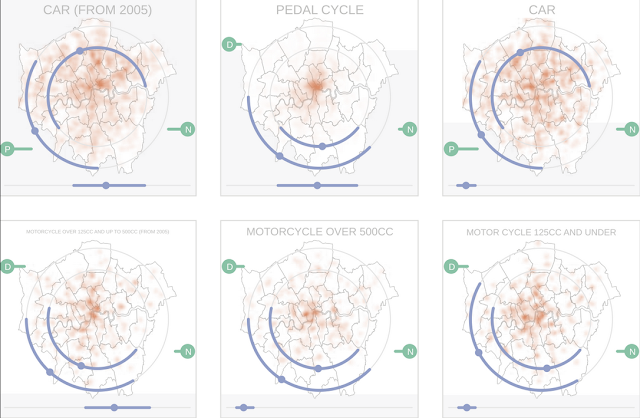 The Peaks and Valleys of Trump and Clinton's support by Washington Post
There weren't any valleys as promised in the map's title but the one thing I liked about this map was how they rotated the map so east to west was top to bottom. It works better that way on a scrolly story map layout. A neat way to modify how the map is presented given the form it is likely to be viewed in. 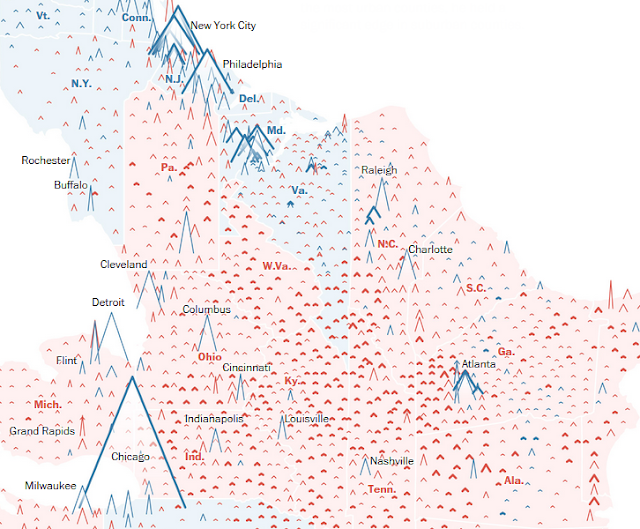 Five+Years of Drought by John Nelson
A bivariate map showing the relationship between severity of drought conditions and length of sustained drought using bold but stunning colour choices. All of the context to the map sits (nearly) on one subdued visual plane with text, linework and labels almost apologetically fading away to create contrast with the main theme and force you towards it. Clever symbology and subtle topography. 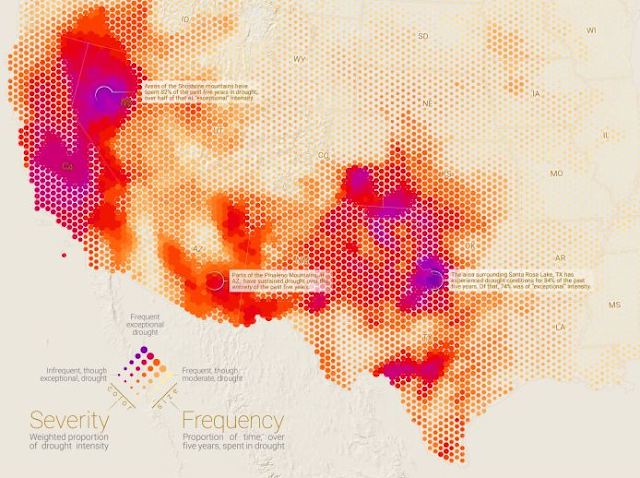 Mapping the Shadows of New York City by Quoctrung Bui et al. at New York Times
Simple idea. Beautifully executed. But this isn't just a computational exercise - it's an interactive map that gives you a tool tip showing the amount of day in shadow for different seasons as you pan across the map. Monochrome backdrop and good use of a single colour for the shadow detail which differs by season. 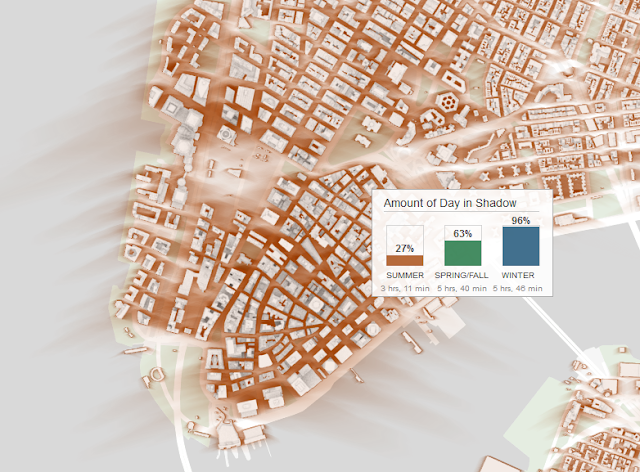 There's plenty of other great maps I could have included but then it becomes a comprehensive list rather than my personal highlights.

Finally - let's have a brief roll call for some of the carto crap out there...The stuff that would make you laugh if it didn't make you cry. There really is far too much to mention but here are some delightful examples presented as small as I can to avoid personal injury: 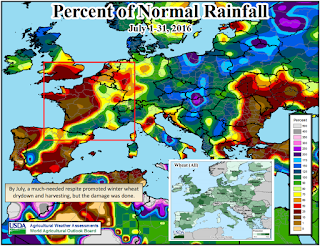 Because no-one fact-checks any more anyway... 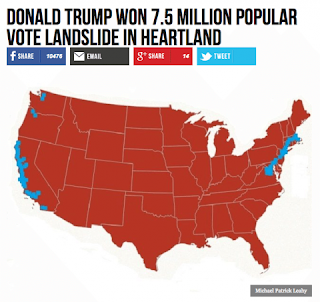 And sometimes you don't even know what the map is even trying to show (it's the election!!!)... 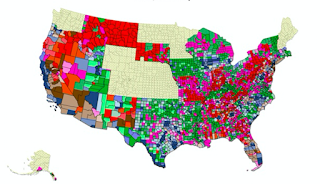 Generalisation is a core cartographic technique but you can go a bit far (with only 931 responses)... 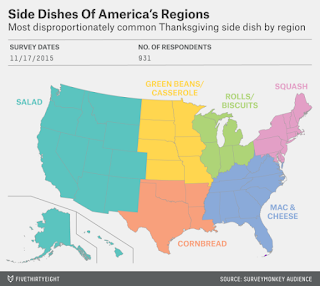 And there's also problems when you zoom out a little too far... 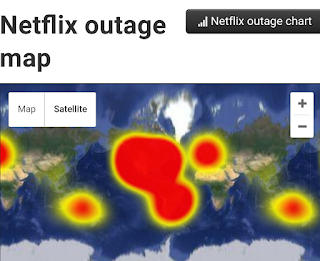 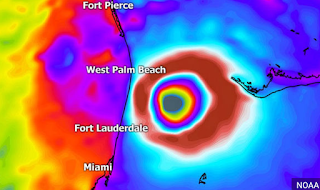 Extreme heat - the obligatory annual entry from the meteorological community... 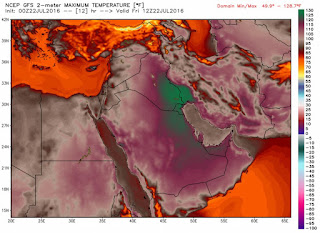 Posted by Kenneth Field at 11:16 No comments: 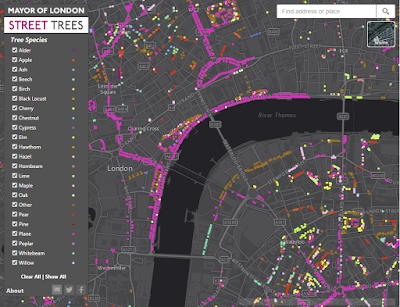