Too much rain for a rainbow

National Weather Service today updated its rainbow colour scheme because of the unprecedented deluge caused by Hurricane Harvey in Texas.


#Harvey in perspective. So much rain has fallen, we've had to update the color charts on our graphics in order to effectively map it. pic.twitter.com/Su7x2K1uuz
— NWS (@NWS) August 28, 2017


Bravo for NWS in modifying its cartographic approach given a change in the phenomena it's mapping. Except they didn't do a very good job. 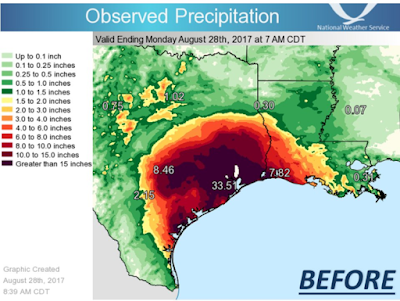 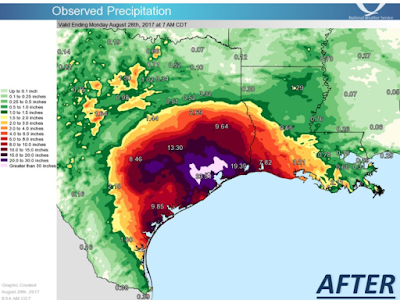 The previous classification had 13 classes. the new one simply adds two more at the top end to deal with larger rain totals. In fact, all they've done is added detail to the 'greater than 15 inches' class and sub-divided it into three classes '15-20', '20-30' and 'greater than 30'. It'd be pedantic of me to note they still have overlapping classes (they do) but the bigger problem is they retained the same rainbow colour scheme and then added two more colours...a brighter indigo and then a pale pink.

Does that light pink area in the new map above look more to you? Or perhaps a haven of relative stillness and tranquility amongst the utter chaos of the disaster?  Yes, the colours are nested and so we can induce increases and decreases simply through the natural pattern - but the light pink could just as easily be seen as a nested low set of values than the more it is supposed to represent.

For a colour scheme that is trying to convey magnitude...more rain...more more more, you need a scheme that people perceive as more, more, more too. Different hues do not, perceptually, do that. Light pink does not suggest hideous amounts of rain compared to the dark purples it is supposed to extend.

We see light as less and dark as more. Going through a rainbow scheme where lightness changes throughout (the mid light yellow at '1.5-2.0' inches is a particular problem) isn't an effective method. Simply adding colours to the end of an already poor colour scheme and then making the class representing the largest magnitude the very lightest colour is weak symbology. But then , they've already used all the colours of the rainbow so they're out of options!

The very least they should have done is re-calibrated the classes to make the largest class encompass the new, out-of-all-known-range range. You can't simply add more classes when you're already maxed-out of options for effective symbolisation.

Better still, look around and learn how it should be done. The Washington Post has made a terrific map using a colour scheme that does have a subtle hue shift but whose main perceptual feature is the shift in lightness values. So we see more, more more as the colour scheme gets darker. It's simple. it really is. 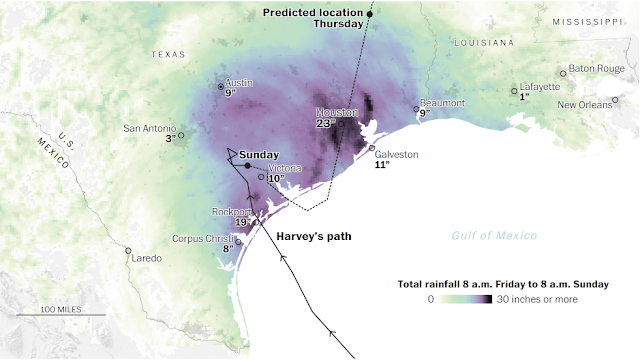 The scientific community continues to use poor colour schemes and poor cartography to communicate to the general public. At least the mainstream media is doing a much better job.

New York Times today published one of the best maps I have seen in a long while. I mean 'best maps' of anything, not just the continuing deluge in Texas. Its simplicity belies its complexity and that's the trick with good cartography. Here's a pretty lo-res grab but go to the site and take a look.

They've got the colours spot on, A slight hue shift to emphasize light to dark but cleverly hooking into the way in which we 'see' deeper water as darker blue. Of course, it isn't really deeper blue but the way light is reflected, refracted and absorbed by water gives us that illusion. So, it acts as a visual anchor that we can relate to.

There's other symbology too - small gridded proportional circles that show the heaviest rainfall in each hour. The map is an animation so this gives a terrific sense of the pulsing nature of the movement of successive waves of rain (literally, waves!). The colours morph towards the higher end as the animation plays to build a cumulative total. This also has the effect of countering the natural change blindness we see when we're trying to recall the proportional symbols.

The two symbols work in harmony. And then, for those who want detail a hover gets you a graph showing the per hour total over the last few days. 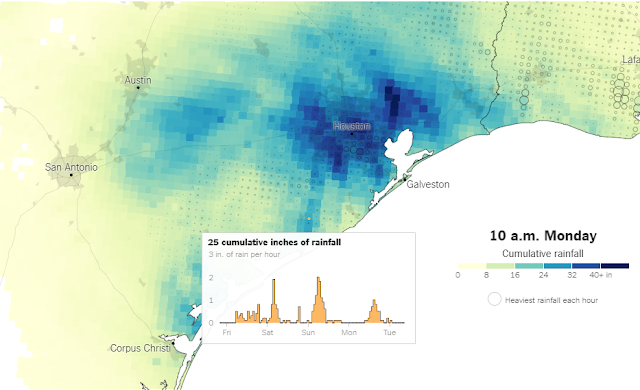 These aren't the only maps in the NYT piece. The article is full of them. Each one carefully designed to explore a specific aspect of the disaster: the history of storms, reports, evacuations etc.

It's maps like those from The Washington Post and New York Times that prove that good cartography does exist and it matters. We really don't deserve the sort of maps that NWS pumps out. They're just really awful to look at, fail on a cognitive level and prove they haven't the first clue about how to effectively communicate their own science and data.

The irony is that the NYT map uses the NWS data of the rainfall data to make their own version and prove that it's perfectly possible to make terrific maps that communicate and which once again give us more reasons to #endtherainbow. Well played.

There's no such thing as GIS maps. GIS is a Geographical Information System (by the way, it's not a GIS system). It's also the acronym for Geographical Information Science. You can do a lot by combining GI Systems with GI Science. One function of which is to make maps. But they're not a special breed. They're just maps, much like you'd make a map using many other tools.

Making maps (part of cartography) has always been a combination of art, science and technology. Get that magic recipe right and you'll make a pretty good map. If any of the three pillars drops short on quality or because of your ability to control them then you'll likely end up with a substandard map. GIS, then, is a core technology that supports cartography. It also does a lot more through its multitude of geospatial functionality. Of course, many people make maps using GIS because it's a core output. The map communicates results of analysis, illustrates natural and human conditions and tells stories. There's many different mediums of map that a GIS can support - web, animated, 3D, print, atlas etc. These are the maps. They're not GIS maps.

I can't recall a time during my career when I ever called one of my maps a pen map, photo-mechanical map, scribed map, MS Paint map, Coreldraw map, Aldus Freehand map, Adobe Illustrator map, Flash map, Javascript map, Silverlight map, HTML map, GIS map et al.. Maps have always been made using different technologies. They continue to be made by different technologies. Your choice of tools is underpinned by multiple influences but you don't strive to make a GIS map. Hopefully you strive to harness the opportunities of your chosen tools and go beyond the defaults to make a map that cannot be defined by your tool of production. Of course, no map-making software is perfect and we all work within limitations but that's always been the case with any map design and production technology.

It's true that many maps made using GIS have a similar appearance but that's the fault of the person making them because they do not go beyond the defaults. It's why you can often spot a map made using GIS because the defaults can be like a fingerprint. If not modified, line weights, styles, colours and fonts all scream of your chosen map-making software. We therefore end up with what I think people mean when they refer to GIS maps - a data dump that lacks design and has common styling characteristics and a particular visual aesthetic. I'd simply call those crap maps rather than blame the software.

Defaults are a necessity in any mouse-driven maps (see what I did there?). They give people a starting point in the software and, over time, they really have improved tremendously. But you're still expected (advised?) to then apply some art and science to make something fit for purpose because, although defaults iterate and improve, it's pretty much impossible for a piece of software to know your precise requirements. Sure, sometimes a default is fine but becoming a smarter mapmaker demands that you critically evaluate what the software gave you and adjust if necessary.

All so-called GIS maps are not the same. I see plenty of pretty crap maps made by people using GIS. I also see some absolutely exquisite maps. I might also say the same about maps I see by people who use Illustrator or Javascript yet no-one pigeonholes those maps by their technology de choix. It therefore strikes me as a little unreasonable to paint maps made by GIS as a special case. A map is a map.

So, just a heads up - if you tell me you've made a GIS map I'll immediately think it's an ill-designed data dump. If you tell me you've made a stick chart for navigating the oceans then you've just made the exception to the rule because that genuinely is a chart made of sticks (ht to Craig Williams for that!). I guess hand-drawn maps might also be a special case though, of course, pretty much all maps are made by hand, mediated by particular instruments.
Posted by Kenneth Field at 09:56 2 comments: