As regular readers (and critics...I know who you are) of this blog will know, this is where I point to examples of bad maps and try and explain why they are bad and why life may be that little bit better if they were improved. It strikes me, however, that this is fast becoming a complete waste of time because the tide of poor mapping is beyond endemic...beyond epidemic even. It's a pandemic. What's more...it seems less people neither want to know or care. They are content with sub-par efforts even if they contain basic mistakes.

It's one thing for the internet to provide a mechanism for people to get mapping, but another entirely when such maps are duly picked up and promoted beyond what they are capable of showing...and that's my beef in this blog.

Business Insider were guilty of this with a series of maps they made earlier this year...promoting their own cartographic ignorance (total of 808,000 views to date). This was also the case after the latest viral tweetmap (the Beyonce flawless map) was picked up by several online blogs and then hit TIME magazine online. Now we have another.

Jeff Sackmann of the blog tennisabstract.com has made an app to map ranking of players by country. 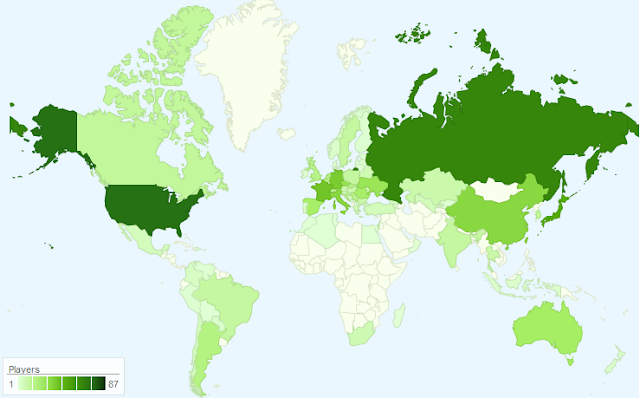 Here, then...the classic non-normalised choropleth. The data needs to be per capita. I might have mentioned this before (yawn!) and I was going to leave this map alone until anumber of blogs and then USA Today picked it up. Now to be fair, they do at least point to the same drawback of the maps but it seems to me a pattern is emerging and it goes something like this...

1. Person makes a map...it is alive therefore it is right (the internet says so and no-one's checking anyway)
2. Person self-promotes it on their own blog/site (nothing wrong with that...it's the internet!)
3. Some people look at map...most believe it because it's a map so it must be true.
4. Map becomes the modern equivalent of fish'n'chip paper except...on the odd occasion...

5. Other people in need of content to promote their own site trawl the internet for stuff happen across map
6. Said map is re-promoted on a new site to many more people (ad nauseum)
7. Any problems with the map are lost in the mists of time (the cacophony of 'Likes' speaks volumes)
8. The map is now cool so to be cool you have to like a map that is cool (hit 'Like')
9. A piece of cartography dies and...

11. Bloggers/commentators/experts (like me) get criticised for not liking the latest cool map

Just because I can...here's what the above map should look like when normalised (and on an equal area projection to avoid the visual bias caused by Mercator). I could have stuck this in an online map (to get clicky things so you can see values for each country) but no-one would have 'liked' it so I didn't go that far but I feel it proves the point anyway. 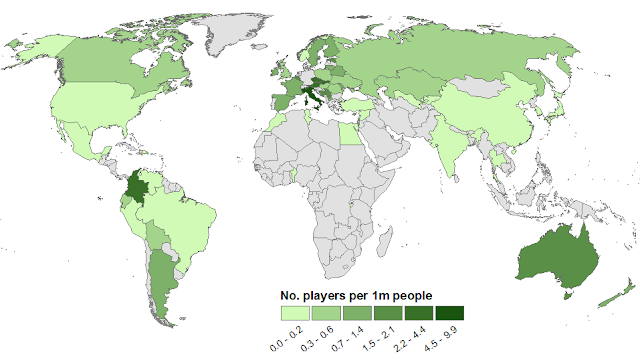 I love that people make maps. I just wish more would make them properly...and even more, I'd like for those that promote maps on their own sites for their own purpose to do some basic research to figure out whether what they are showing is actually worth showing. If people reading maps are unable to tell the difference (and why should they...they're busy with their own lives and areas of expertise) then it's beholden on map-makers to make their maps right.

[update: edits to correct spellings]
Posted by Kenneth Field at 10:51