Maps that cross my path must be getting better. Since I started this blog as a way to critique what I perceived as poorly designed maps, the number of blog posts I write annually has decreased. That's not to say that there aren't still some awful maps out there. There are. But maybe the balance is getting better? Or I'm getting less choosy? Or, who knows?

There's clearly still some major issues to address in the world of improving people's diet of maps. Persuading people that Web Mercator really isn't either the best choice, or even an uncontrollable default, still needs more work. So does the incessant use of rainbow colours on many, many maps. Just stop it. Please! If your work suffers from a #cartofail like this then you will not see it in this particular blog post that's firmly focused on the good stuff.

I always say that great work can do much to show people a better way so in that spirit, here's a bunch of maps that I saw in 2019 that I really liked. It's not a top ten. I saw many more I also really liked. There's likely many great maps I never even saw so it cannot be considered complete or comprehensive. They're in no particular order either but it's just a record of what I found good in this year's world of cartography. I'd also encourage you to go to the originals via the links. All I've included here are some screen grabs.

Maps took centre stage in this scrollytelling article, and each was well crafted, vibrant and insightful. They're simple in scope but that doesn't mean simple maps. They're just pared back perfectly to fit web delivery. Great examples of contemporary web cartography. Six maps in total. All working together as a coherent set. Here's one: 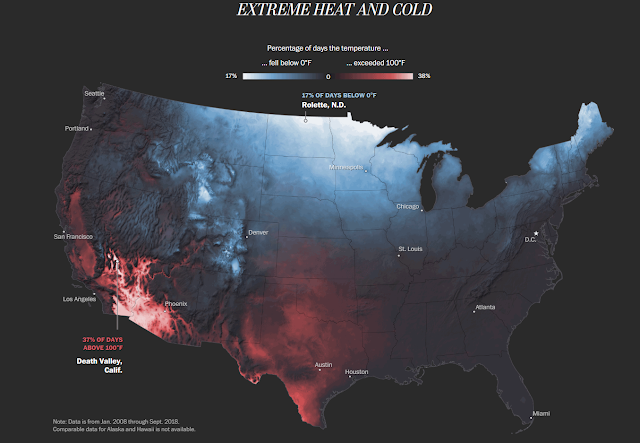 
I have a slight fetish for transit maps (as I'm sure most know) but I'm always interested in new takes. Jug's work in redesigning many of the world's major transit systems is phenomenal and worth checking out in its own right. Here, he takes a wonderfully artistic approach to Japan's bullet train network around the rising sun illuminating the north-west of the layout. Genius! 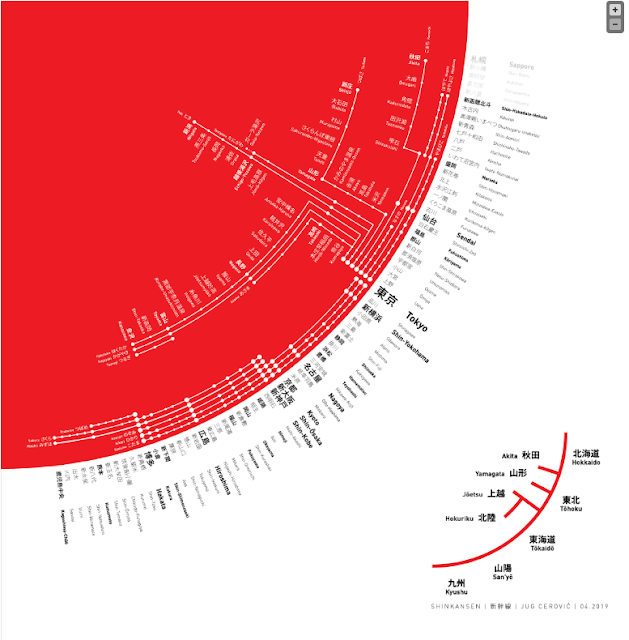 A few years ago I messed around with a technique to symbolize UK election data in a the style of a Jackson Pollock painting (and I recently applied the same technique to the 2019 General Election). But it's wonderful to see ideas take on a whole new life in different contexts and this re-interpretation and application of the technique to showcase tree species and canopies is wonderful. The overall composition including text, graphs, satellite imagery and illustrations creates a perfect modern infographic. 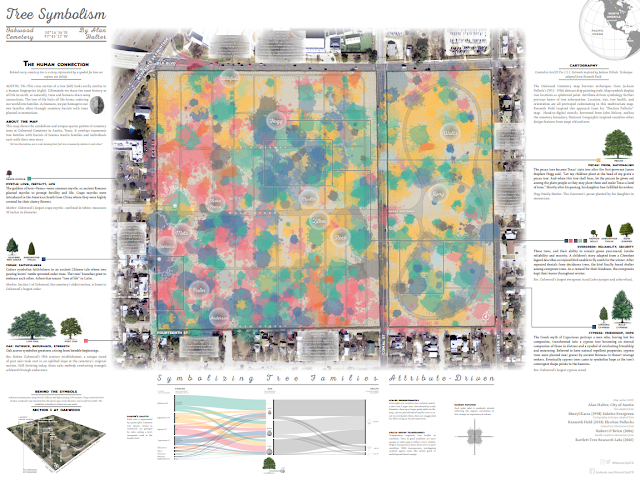 Emoji map of the UK by Ben Flanagan

My friend and colleague Ben wasn't the first to make maps out of emoji but his efforts at making them from 240 characters in Twitter was fun and spawned a whole raft of efforts from many other people. I particularly liked his playful riff on the ongoing discussion of the Shetland Isles and inset maps which came to the fore in 2018 and still manages to be a source of cartographic humour. 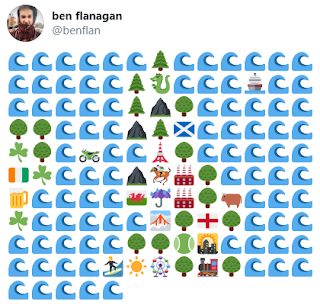 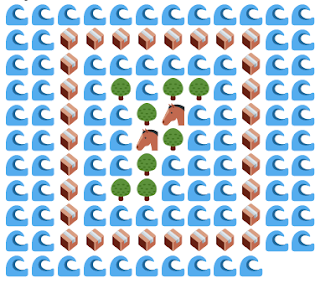 Resilience in the Iroise Sea by Le Monde

This is one of 40 maps in the 'The time of the island" exhibition that took place in Marseille, France,  this year, on the Geopolitics of Islands. It's just exquisite. Almost an historic, retro aesthetic but the layout, the linework, the colours, the typography - all perfectly harmonious. I particularly like how the north arrow and scale bar are incorporated into the map's frame. 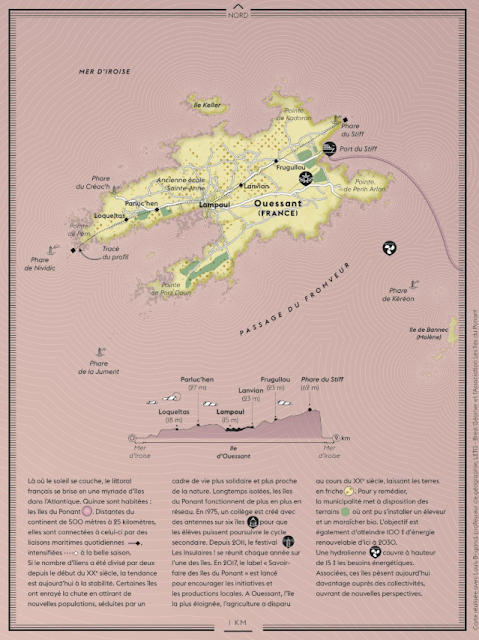 Income distribution in Switzerland by Angelo Zehr in SRF News

Bivariate choropleth maps are hard. You have to limit the number of classes to an absolute minimum, maintain a sensible classification, and still allow the reader to see the relationship between two variables. This map does that job perfectly (also on the interactive version). But what I really like about this map is there's no spurious shading where there are mountains and no people. All too often we overlay arbitrary enumeration areas across geographies that exhaust space but fail miserably to show the differences between where people are and where they are not. I love that this map made the effort, and also still managed to add interest with a hillshade. It's Switzerland after all. 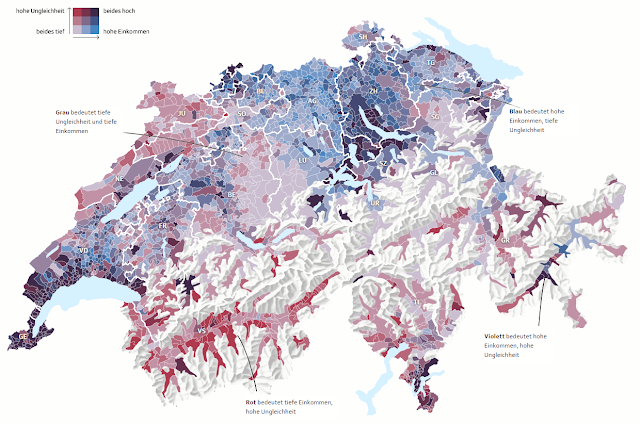 Cartoons and maps have always gone well together and in the expert hands of political cartoonists they really take centre stage. I love this cartoon that shows Trump clinging on for dear hope to Florida as he drags the USA to even murkier depths. The bemused fish perhaps represents what everyone else is thinking as they sit back and watch the current political situation unfold. 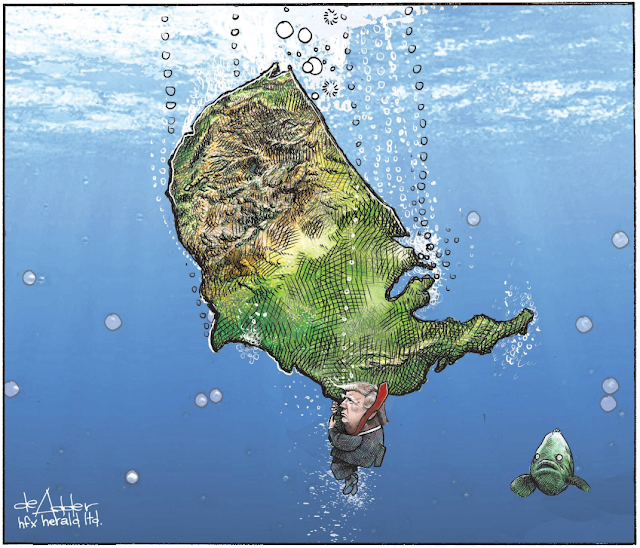 Heating of the Arctic by Greg Fiske

November 2019 saw a fantastic twitter #30DayMapChallenge which had contributions from many and is well worth a trawl. The concept was simple, for the theme of the day, create a map of some data. The time limit was almost self-imposed so the maps were often quick and dirty, but that didn't mean they lacked beauty and great design. Maps by Jo Wood and Craig Taylor, in particular caught the eye. But the single most interesting map I saw was this. It's a view of the data I'd not seen before and that always makes you stop and pause. This may have been made quickly but it's clean, arresting and informative. 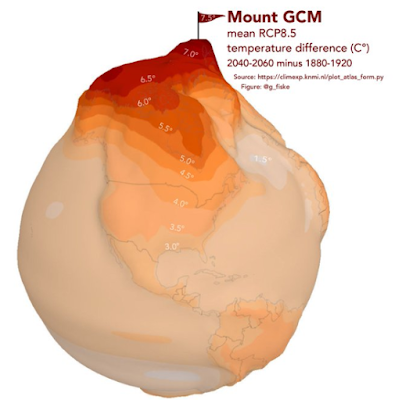 The Man Behind the Maps by James Niehues

Not a map, but a collection of maps representing the career of legendary ski resort artist James Niehues. If you've ever been skiing or snowboarding then you've likely used a trail/piste map illustrated by James as he embodies the latest of a small line of talented panoramists (Heinrich Berran, Hal Shelton, Bill Brown). This book came about through a kickstarter project that went viral. Now, instead of tattered, soggy maps you have to throw away after a few days on the slopes, they are beautifully collected in this magnificent book with all sorts of background notes. A true feast for the eyes of anyone who loves mountain cartography. 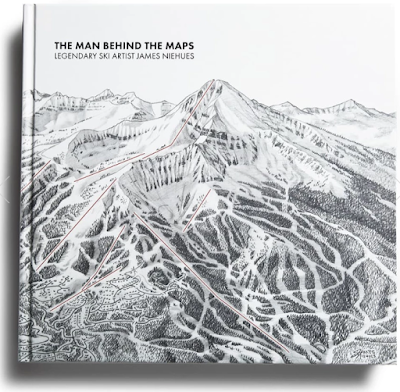 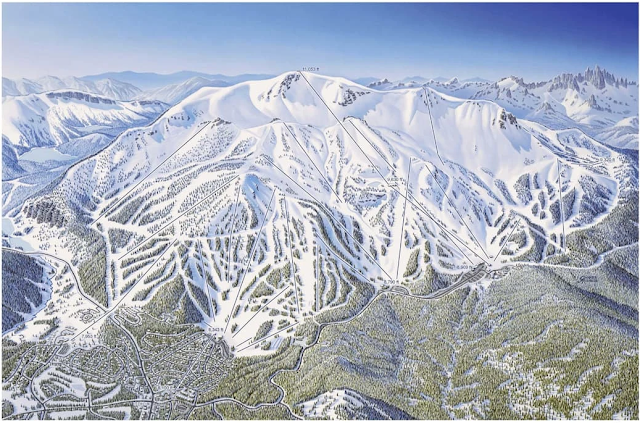 This map came away with the big awards at the 2019 International Cartographic Conference in Tokyo and rightly so. It won on so many levels. It was huge. At 1:250,000 but measuring over 2.5m long and a  metre tall it was stunning to see such a large high resolution satellite map of this part of Antarctica. Was the size just for capturing attention? No. The size of the map juxtaposes the sparse, barren, yet stunning landscape punctuated with small crops of intense detail. The map is littered with skillfully placed and detailed typography. If you've got a wall big enough you can download it yourself from the link above because clearly this blog cannot do it justice. 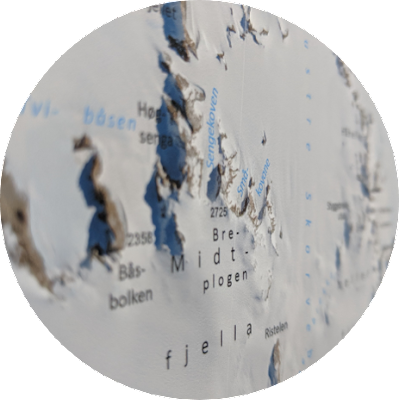 Streets of Gold by Warren Vick and Ewan David Eason

This map won a shed load of awards in 2019. Of course it did. It's made of gold leaf and is a stunning (c)art(e) piece. If you're after an award then this is the approach to take. Make something visually stunning that people naturally want to pore over in a gallery. Can you use it as a map? Unlikely. Want it on your wall? Sure! 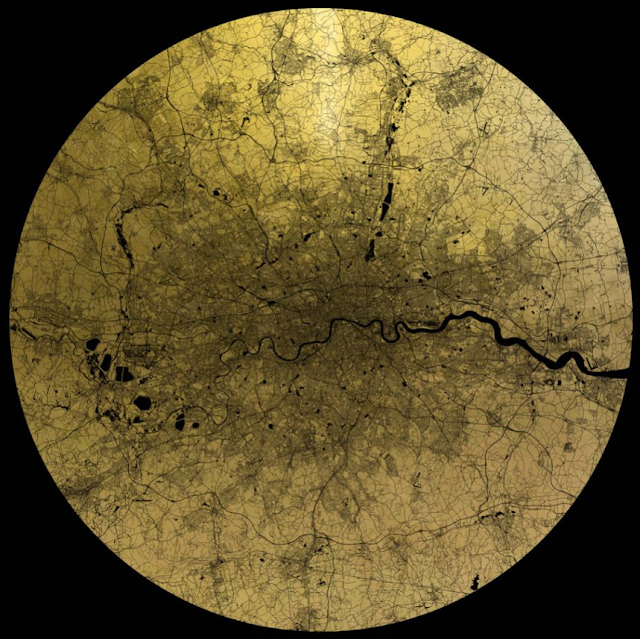 Where the wild things glow by Jonni Walker

I give my good friend John Nelson a lot of ribbing for his firefly symbol creation. Truth is I love it, but as with any symbol scheme it often gets mis-used (i.e. applied to any dataset for the hell of it regardless of whether it's actually suitable or not). So to see the approach used on a map of bioluminescence was perfect. But this map goes well beyond just a good match of symbol to subject. The overall atmosphere is engaging. The layout is full of detail yet not overcrowded. There's description to aid the reader's interpretation and best of all, the tilt of Australia to make the map work within the page size and shape, and to provide space for the other marginalia is the best trick. 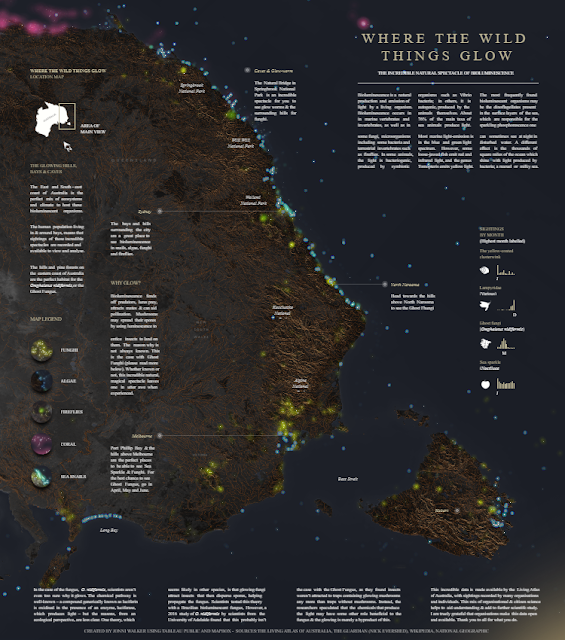 An Atlas of Space by Eleanor Lutz

There was a time back in 2016 when Eleanor gave us simply a beautiful portion of Mars but this year she released  a collection of ten maps of planets, moons and outer space. It's a wonderful collection of different design approaches and new expressions of cartographic creativity. Colourful landscapes of natural and human impacted phenomena which are all made programetrically too. And this work is her part-time gig. She's studying for a Biology PhD in disease vectors of mosquitos. 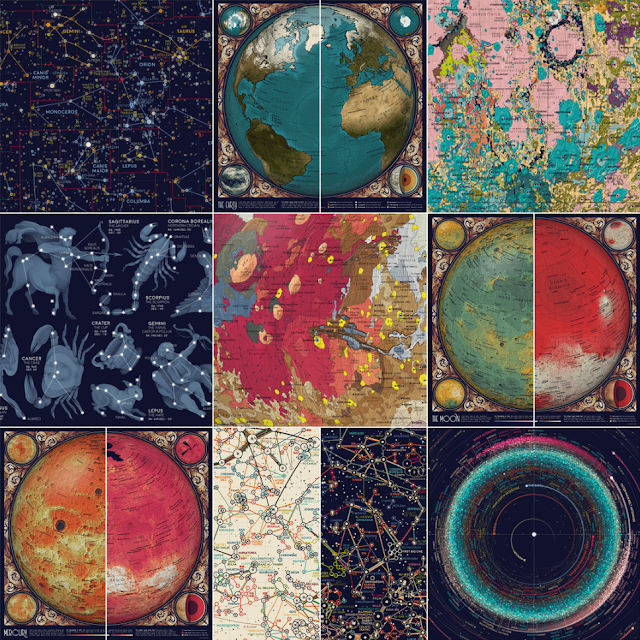 OK, so, drink was involved. At the NACIS 2019 conference what better way to divest of a bowl of inedible wasabi pea bar snacks than make a map out of them? Trouble is, in a bar full of cartographers there's only really one person who can carry out the task of making a world map without downloading some map data and churning it through some software. Anton Thomas got to work, captivating the bar and, from memory made this perfect little world map. The best bit - not Mercator (though to be fair it's hard to determine its exact properties). And then it was gone... 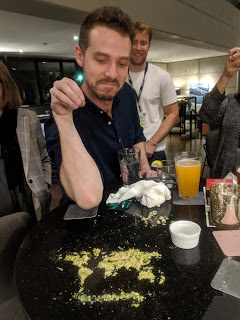 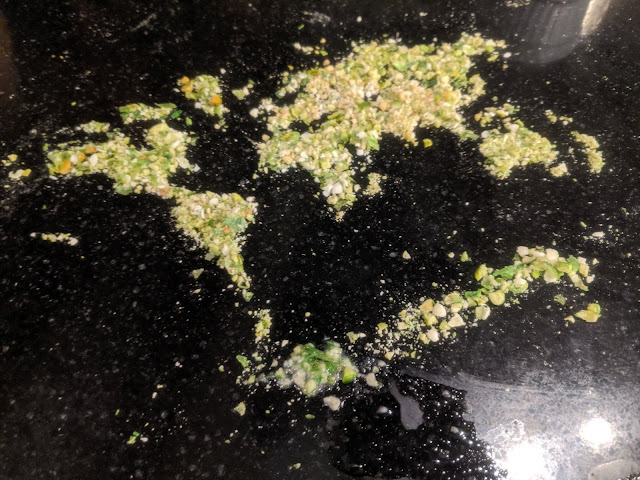 Children's maps are a whole magnificent cartographic sandpit in their own right. The Petchenik Children's map competition at the 2019 International Cartographic Conference in Tokyo showcased some incredible work (plus the usual eye-brow lifting entries that might have had some, ahem, adult help). You can see the winning entries here. But favourite children's map for me this year wasn't part of the exhibition at all. It was drawn by my niece, Eloise as part of her school work. The task was to create a drawing that represented 'the end of the world'. The cartographic force is strong in this youngling. 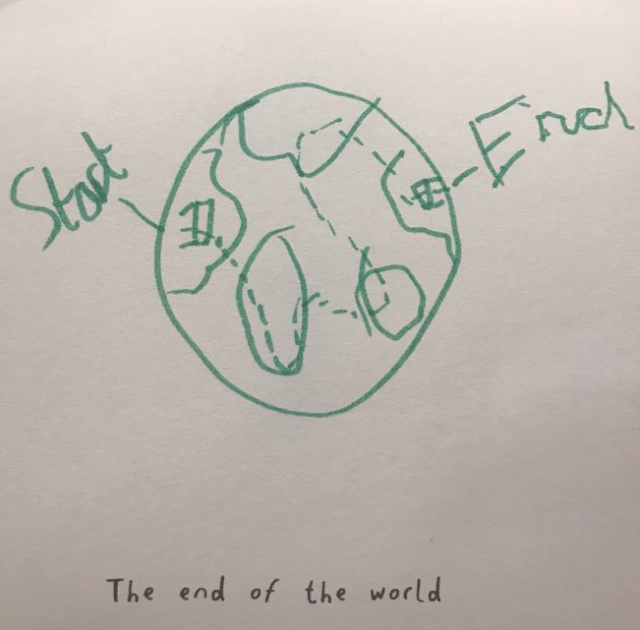 And finally, I don't normally put my own stuff in these lists (that's for others to judge according to their own tastes) but the world is in a weird place and with the apparent Presidential modification of an official NOAA map of Hurricane Dorian I felt this worthy of inclusion. Anthony Robinson and I concocted a bit of fun in the wake of what became known as #sharpiegate. We made some sharpie "official cartography pens" and I took a blank map to the 2019 NACIS meeting in Tacoma WA. Simple idea - leave the map in public for a few days and see what happens. It's cartographic performance art. Most maps show a point or period in time. This map is of its time. It's a collection of dozens, if not hundreds, of people's comments, drawings, additions, modifications and so on. There's some very famous cartographic hands across this work. It was fun. 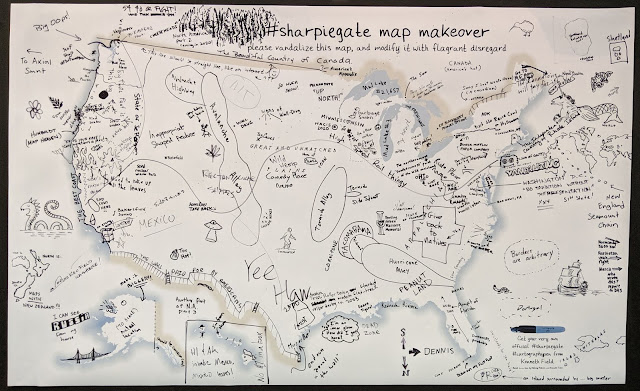 Agree? Disagree? I liked them all for many different reasons.

Happy Mappy New Year to you all.