A new map in prospect

We took @wisley_dog to one of his favourite local parks the other day. Prospect Park in Redlands is a lovely spot that sits a little up the hill in south Redlands offering spectacular views across the San Bernardino valley to the mountains beyond. It's a mix of trails, orange groves, places to picnic and also houses an outdoor amphitheatre. It's also next to Kimberly Crest House - one of Redlands historic houses. At 11 acres it's not a large park.

Like many, we parked on Cajon St and entered the park by its North-East access points. There's a shady picnic spot and, as I found, a new information board which houses a new map of the park. Here it is, measuring about 3ft wide: 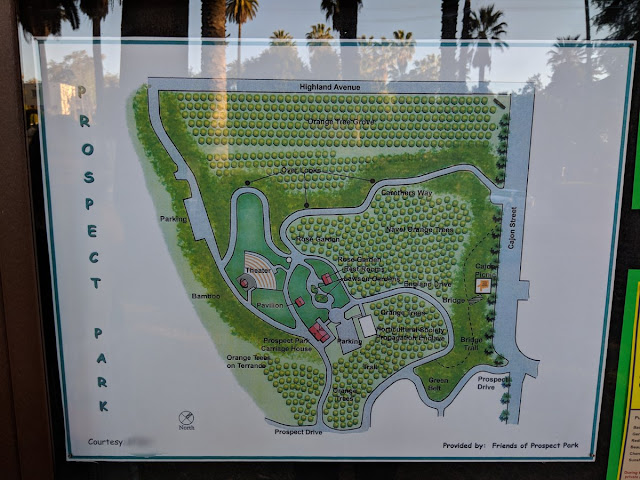 That's a lot of map for a small park. It kinda ruined my walk. It likely ruined Linda and Wisley's walk too as I bent their ear about the map and its problems. So let me bend your ear too and, hopefully, in the process, show you how to critique a map.

On the face of it it looks nice enough but as with anything that's dressed nicely it can often deceive. So let's deconstruct it a little and have a conversation about some of the cartographic and design choices.

The information board is located on the North-East edge of the park. You look at it facing South-West. Yet the map is oriented with North-West at the top to align Highland Ave with the top edge of the paper. This makes absolutely no sense. Fundamentally, the map is oriented incorrectly. These sort of in situ maps need to be oriented so the map is laid out as you look at the park in front of you. This map should have Cajon St at the foot of the sheet and, as you look (and wander) beyond the map you can then easily process the lefts, rights and other locations of points of interest in the park. Rotate the map and you get this which is far more useful from that location: 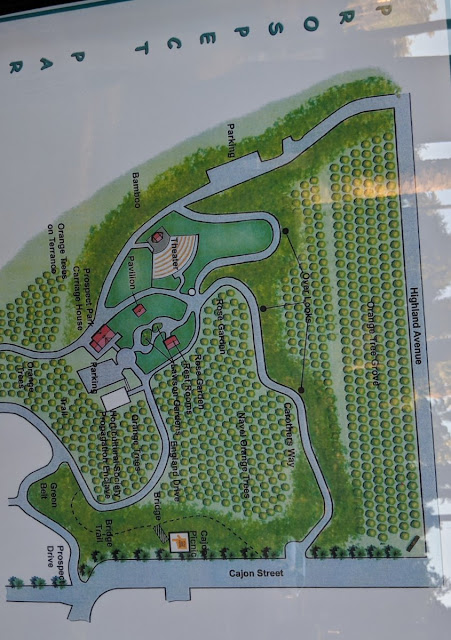 This is an all too familiar problem of maps on information boards like this. It simply needs the people who commission the map and those making it to have a conversation about where it's going to be displayed. It means if it's to be displayed at several locations it should be rotated accordingly but that's not difficult if you use a GIS and it's data-driven. It's also not difficult with some forward thinking as this other Redlands park map shows. The Caroline Park map is on a board on the south edge of the park. North is top and you stand looking at the map, looking northwards. Perfect. It's also a beautifully illustrated map that shows you the function of different parts of the park as well as the flora and fauna you may see. 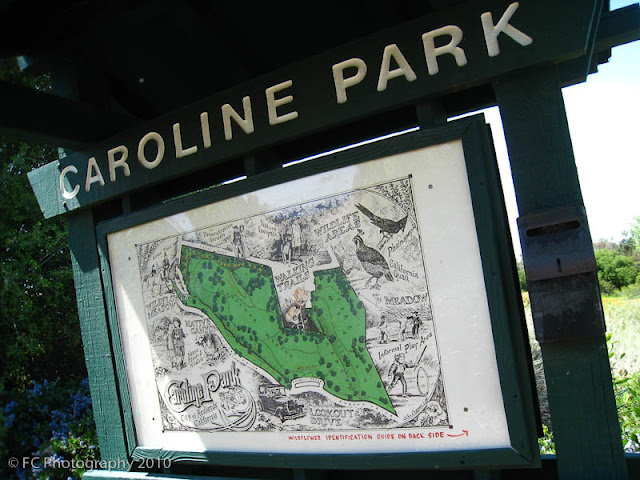 Back to the Prospect Park map. Orientation is not the only problem. The labeling is awful because you have difficulty reading it. 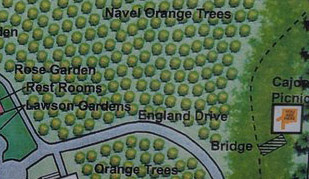 Simply overprinting black text (in boring Arial) over the background is never going to work. There's so many ways of improving this. Masks, Halos, Shadows. Anything! And there's leader lines everywhere. they're unnecessary.

There's so much space on the map which makes should make lettering it an absolute joy compared to most maps. And as far as the overlooks are concerned, a symbol might be more useful and that would obviate the need for a typographic element and three ugly leader lines altogether.

So...overlook. That tells you something. It means that there's some elevation throughout the park. Yet the map displays no information to warn the casual visitor that there nearly a 100ft elevation gain between Cajon St and the highest point. A vantage point that then allows such beautiful vistas towards the San Gabriel and San Bernardino mountains (and the San Andreas Fault but I try to ignore that most of the time). OK, but there's a network of nicely paved paths right? They're all shaded grey so they're all the same?

Imagine you're a wheelchair user or struggle with walking up a moderate incline. You'd not only be frustrated that the map shows no detail of the elevation gain but, worse, many of the trails are nothing more than dirt and gravel making them almost impossible to access for some people.

By making all the paths the same symbol type the map infers they are the same. Yes, you can drive up to the parking lot at the top via Prospect Drive but you can't take your car anywhere else. You can't similarly access it from the other apparent entrance on Cajon St either. the map might not need detailed contours other other ways to show elevation but showing how elevation changes along the trails would, at the very least, be an extremely helpful piece of information.

And what of the parking to the left of the map that you can access via Highland Ave? Well, technically, you have to go through the entrance to Kimberly Crest house to get there and that has a gate that is locked at times when the adjacent park is open. Useful information, particularly so you don't get locked inside with no way out. In fact, that car park is not really part of Prospect Park at all. It's the access to Kimberley Crest House and Prospect Court as this OpenStreetMap map helpfully symbolises by specifically not including it in the green that designates the park boundary.

Take a look at the OSM map again - it shows one route into the park for cars to get to the central parking lot. It shows clearly how you access it via Prospect Drive. It shows other trails inside the park differently to distinguish their use. But while we're at, it there is an error on this map too. If you access Prospect Drive from Highland Ave you cannot drive through and round the bottom edge of the park and into the Prospect Park lot that way. There's a chain across the road to prevent access. And neither OSM or the new Prospect Park map has the new footpath included between the Kimberley Crest car park and Highland Ave.

Zoom in to the OSM map. See those water fountains? Redlands can get kinda hot. Water fountains are important for dogs and humans alike. They should be on the map. The Prospect Park map has restrooms (labelled - maybe another case for a symbol?) but not water fountains. Makes the map a little partial with basic information.

And back to the map's background. At first glance the Prospect Park map appears to be a hand-drawn and painted map. I think it's based off some form of digital data (possibly even just traced off imagery). It looks OK but it could be so much better. Each orange tree gets a uniform symbol. A bit of rotation on each would make the groves look more organic and 'real'. And what about all the other vegetation? There's palms, giant mature specimen trees, a bamboo forest, seating and grassy areas to name a few major parkland types of ground cover. yet pretty much everything other than orange trees and the palms along Cajon St gets the same smudgy fill. This could have been so much more exciting with other tree species canopies or symbology.

There's also a small creek than runs between the picnic area beside Cajon St and the park beyond. Why wouldn't you mark that? It has 6ft walls despite not always having much water in it. It's hard to miss in reality yet the map makes no mention of it. It's a prominent feature yet all the map has to indicate anything is a bridge label next to a cross-hatched rectangle that is presumably supposed to represent the bridge itself. A bridge over what?

Possibly a spelling mistake too...lower left 'Orange trees on Terrance'. I think they mean 'terrace' though I can't be absolutely sure. I've never seen Terrance there. I don't know anyone named Terrance.

The north point thing seems to be a small apology wandering aimlessly in a vast space because there was a space and to cap off the entire map the title and credit lines are in Comic Sans - that font that every map-maker loves to hate. Is this a subtle bit of carto-trolling? Could be. Could just be a pointless use of Comic Sans that makes no sense on a map that otherwise uses Arial. And why on earth would set the title in horizontal letters aligned vertically? Use Comic Sans with purpose. Reserve it for the uses it was designed for (children, comics and, latterly, to support those with dyslexia). It has no place on an information map like this - in the same way Papyrus has no place on restaurant menus.

So...what to do. Well, I've had a moan. I've justified my thoughts based on what I know about cartography. I tell you what, I'll make another version (for free) and offer it to the City of Redlands Parks Division. I'll post back when it's done and invite anyone and everyone to critique my map. In the meantime, you'll find me at Caroline Park where I hope they're not planning to update the current map with a similarly weak replacement.
Posted by Kenneth Field at 10:46