In praise of insets

Sky News reports on the Scottish politician Tavish Scott (real name) as he proposes a ban on maps that use an inset to show Shetland. Utter nonsense.

His reasoning is that the 'islands should be in the right place on the map' and 'to ensure that in future that government publications and documents do reflect the reality of Scotland in terms of its geography, and not something that fits neatly on an A4 sheet of paper.'

Well let's just break down (sorry, I mean utterly destroy) his preposterous statements. Shetland (The Shetland Isles) is a part of Scotland. It's also part of Great Britain...and the British Isles... and the United Kingdom (and at the time of writing at least, Europe). The following usefully clarifies the terminology:

So in that sense it has a rightful place on any map of which any of those jurisdictions is the focus.

If you're not aware of where Shetland is in the world then this should help (map to scale, UK National Grid): 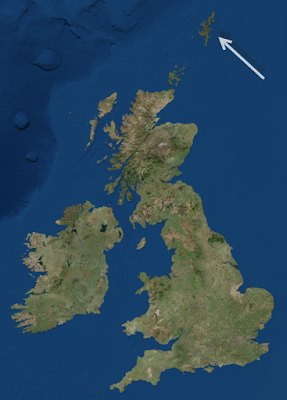 In simple geographical terms Shetland is approximately 130 miles from mainland Scotland though it's also on the same line of latitude as Bergen on the west coast of Norway at a distance of 200 miles. That's where it sits. At a nice northerly 60° 9' 11" N and 1° 8' 58" W. We can argue all you like whether it should be part of Scotland or, perhaps, a bit of waste left over from Slartibartfast's design of the Norwegian coastline but for now, it gets put on maps of Scotland and any other that includes Scotland. And that makes it a pain in the arse for cartographers.

By the way, did anyone spot I deleted France from the map above? Guess that'd annoy the French too but whatever, I doubt the scots or Scott cares much about that little cartographic editorial decision.

Anyway, as the scot, Scott, says, many maps are made on A4 (or any A series piece of paper where the length and width are in the same proportion). So here's the above map proportioned as A4: 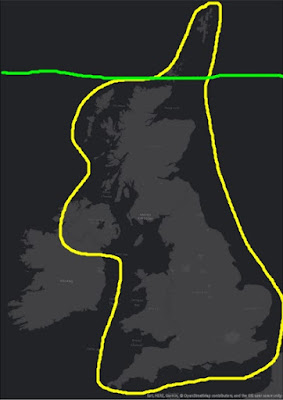 The area outside the yellow line is superfluous to the map as the Republic of Ireland is irrelevant on many maps that show thematic data for Great Britain and Northern Ireland (or UK etc). So as a rough estimate the page only uses approximately 60% of its overall space to show the mapped content.

Put another way, we need a fifth of the entire page (above the green line) just to get Shetland on. That's Shetland, population 22,000. Or, in geographical terms, an island that is 566 sq miles which is 8x larger than the City of Glasgow but which has 27x fewer people. So you're making a decision to allow geography to not only influence the design but take an inordinately exaggerated status simply by virtue of position.

Now, admittedly there's lots of lovely space for titles and legends and all the other crap we put on a map but, nevertheless, it's wasteful. But that's what you'd have to do if you want Shetland on the map, on that proportion of paper, in its correct geographical position. Alternatively, as Scott bemoans, cartographers will often use an inset and you'd end up with a map like this: 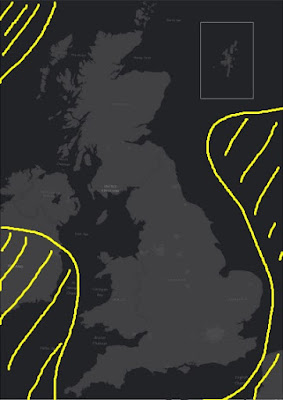 This fits the map to the paper (not the paper to the map). And there's far less wasteful space. Far less prominence to unpopulated swathes of water. And yet Shetland gets its own little special place on the map, with the addition of a neat border that clearly demarcates it. Often, Shetland is even exaggerated in scale to make the inset worthwhile. I bet you didn't notice but in the example above Shetland is about 25% bigger than it really is. So, if Scott wants Shetland back in its proper geographical location then he can have it reduced back to its real size too.

Insets are a neat solution and one that has served print mapping well for centuries. It's also a solution that people understand. You could add a small arrow and distance marker to point to where the inset exists in reality. Many even use a marked graticule to show clearly the lines of latitude and longitude that apply to the inset to make it clear that it differs from that of the main map. Even the Sky News article showed an historical example that clearly uses this technique (and note how exaggerated in size Shetland is on this too): 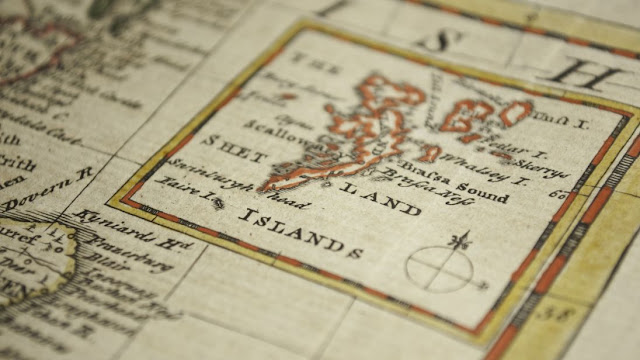 Returning to the City of Glasgow. In fact, any relatively populous place. They suffer horrendously on any maps of thematic data because large areas, perhaps relatively uninhabited or sparsely populated take visual prominence. Scotland is a great example. Its total population is around 5.3 million yet 1 million of them live in Glasgow and Edinburgh. Their population densities are far more than the far greater share of Scottish land, including Shetland. So why give such visual prominence to sparsely populated areas?

Insets are not just used to move geographically awkward places. They are commonly used to create larger scale versions of the map for smaller, yet more densely populated places. Often they are positioned over sparsely populated land to use space wisely. I'm guessing Scott would have an objection to an inset that, to his mind, would exaggerate the geographical importance of Glasgow compared to Shetland. Yet...in population terms it's a place of massively greater importance so one could argue it deserves greater relative visual prominence on the map. Many maps are about people, not geography.

In addition to moving Shetland south to make better use of map space, you could very well argue that you should use a cartogram to give far better relative visual prominence to the places where more people live and work. Now that will utterly delight Scott as it completely distorts geography. Not only could you have Shetland moved, but squished to an almost unrecognisable shape. Here you go Tavish...enjoy this beauty of population totals morphing geography (courtesy: worldmapper.org): 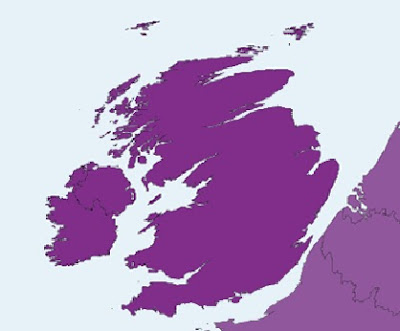 Whatever your view of insets (and Scott's is incorrect), there's so many valuable uses for them that counter the problems of geography making it awkward to make maps. Generations of cartographers have come up with novel solutions to many, if not all, of these dilemmas about what to show, where and how. And if the map has an overarching location map showing everything in its correct position then there can be absolutely no confusion whatsoever.

I would guess Scott would equally be horrified if Shetland was seen poking outside the graticule or neatline on an atlas page too - another common way in which maps break the rules of either geography or design in a creative way to simplify and communicate. He'd be delighted by this classic Times Atlas of the World page showing Shetland in its correct position as part of The British Isles but horrors of horrors...Rockall (also a part of Scotland so has equal rights on a map based on Scott's nonsense...but ignore the more northerly Faroe Islands, not part of Scotland) slips off the left edge: 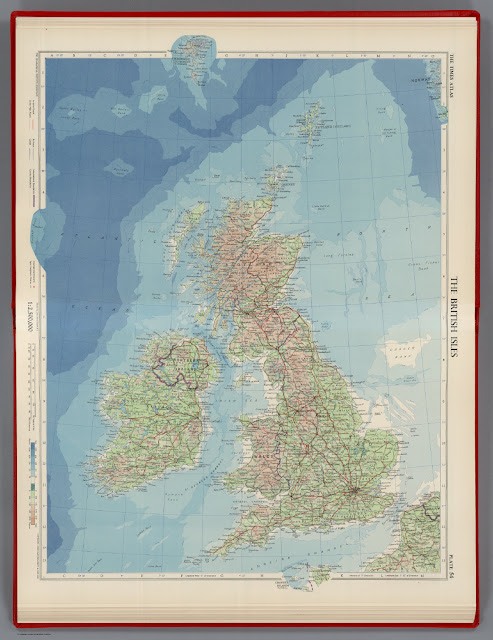 And what of digital maps? Scott seems to be stuck in the age of print cartography because insets are rarely, if ever, a requirement in digital cartography. Everywhere exists where it is. The map is slippy and you can pan and zoom to your heart's content. Want to see a densely populated area? Zoom right on in. In fact, whisper it quietly in case Scott is listening but...if he uses the standard Web Mercator web map he not only gets Shetland in its rightful position AND it's also exaggerated in size compared to the southerly latitudes of mainland England by virtue of the projection. Now isn't that the map he really wants?

As BBC News reports Mr Scott has got his way and a bill has been passed that includes a 'mapping requirement' that Shetland not be placed in a box. Fortunately there's a clause allowing cartographers to use an inset if they have a case to do so...so that's OK then because there's always a case to do so UNLESS you're making a navigational chart where distance, direction and bearings are obviously the paramount need for the map's properties and design to support. But all this really means is time wasted and taxes used up as map-makers submit their case to use an inset for Shetland.

So, where do we go from here? If Alaska and Hawaii find out about this nonsense then it's going to make future US maps rather interesting. And please don't get the Falkland Islands worked up and starting to assert their right to be included on maps of the UK. As a British Overseas Territory, they, along with the rest, may very well start insisting they should be on the map, in the correct location. So, here's your updated map Mr Scott. Shetland is in the right place but you can't see it any more because we've had to include all the British Overseas Terretories as well. Sorry about that but they all have an equal right. I do hope you appreciate it's a useless map for showing important geographies of the UK though. That's what the new 'mapping requirement' law promotes - bloody ridiculous mapping. 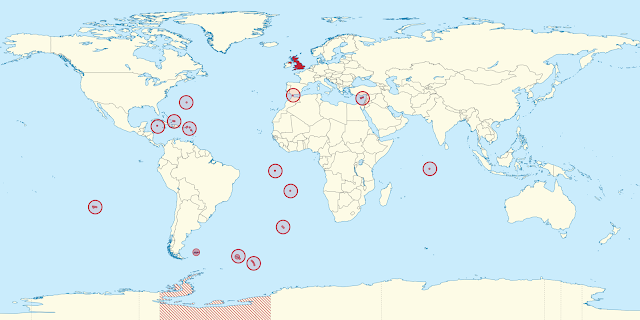