Like many people (and pretty much everyone I know) the shift in politics in 2016/17 has me at times hopping mad and, on a good day, just plain baffled. As a Brit living in the U.S. I watched Brexit from afar, safe in the knowledge that having seen the UK take one for the team, the American voting population wouldn't make the same mistake. Alas, that hasn't happened and day by day we're subjected to lies, chaos, tweetstorms and utter bullshit from the Trump Presidency. Can anything good come of this situation?

Well yes...it prompted me to pick up my pencils, pens and paints for the first time in many many years. I work every day with computers to make maps. I haven't drawn for so long but I've been getting restless to give it another go. Chatting to Craig Williams at work one day we thought a little about some classic map satire and this sketch on my whiteboard plotted the way ahead. 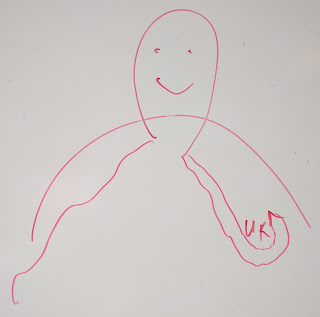 I sourced a load of reference material and relied on the way proper, talented artists handled the caricatures then I began sketching an ensemble piece. Here's what happened... 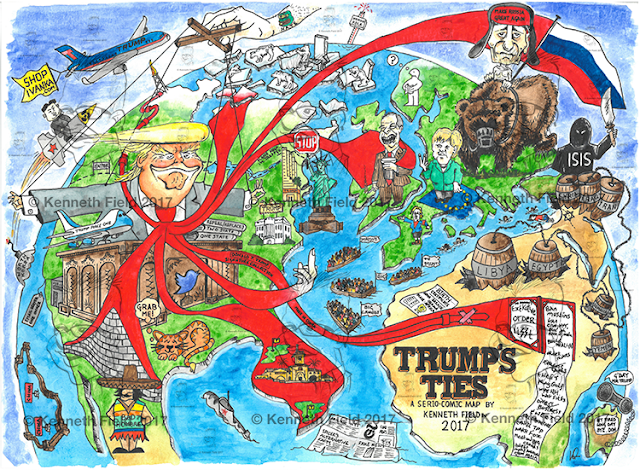 You're seeing a lo-res watermarked version of Trump's Ties. You can see a medium resolution version here. It's a 15 by 11 inch serio-comic map following the long-established approach of many cartographic satirists through history. Most notable among those is Fred W Rose who drew many in the late 1800s. Perhaps most famous for his Angling in Troubled Waters he also drew many maps with the tentacles of an octopus stretching out across Europe. I also like the work of Robert Dighton whose caricatures are wonderful, here in his series Geography Bewitched.

With apologies to Rose, Trump's Ties uses the famously scotch-taped red neck tie as the tentacles of the metaphorical octopus spreading across the globe. The first month of Trump's Presidency has provided an obscene amount of obscene material and there was no problem filling in the map. Thanks also to Linda Beale and Edie Punt for some great ideas for content. No space for sea monsters or dragons on this map.

I enjoyed this process. Getting back to drawing was cathartic. There's something very fulfilling about the creative process and, also, the method of crafting something unique by hand. My computer allows me to iterate out all the mistakes I can find on my digital maps. This was far more challenging because it had to be built and there was no room for error once the ink and paint started to be applied. And I had an immense amount of fun trying to cram all sorts of visuals in. There's even a cartographic homage to Ortelius but Kellyanne on a couch, Pence's own personal email server and travel ban Mk II will have to wait until the next one because I ran out of room. That's amusing in its own right...the map is already out of date as the list of banned countries has changed.

Most maps I make I give away. This is a little different. I had thought of producing a limited edition but after careful thought I've decided to make it available via Imagekind (who handle all of the printing and shipping logistics). It's $20.88 for a 15" x 11" print on enhanced matte paper. I make a small royalty on each which will be donated to the ACLU Foundation. You can purchase a print here.

I hope to make a few more but it would be nice if it didn't become a monthly series of Trump inspired pieces. Frankly, the visuals would be a lot funnier if they weren't so true.
Posted by Kenneth Field at 12:20