A few years back, designer Kai Krause made his multi-viral 'True Size of Africa' graphic. It's what got me riled enough to start this blog and it was the focus of my first post as I re-drew the map using shapes from an appropriate equal area projection. I got called a 'marauding cartonerd' for making some salient observations and making the corrections.

He got a bit miffed that people were pointing out errors in his work but he remained committed to the cause of simply trying to show that Africa is a big place. His wholly misleading map constantly bubbles up on the internet. The critiques get largely ignored because few care about accuracy and the world keeps turning. Except he's only gone and updated the graphic.

Scientific American published his new graphic in a blog entitled Africa Dwarfs China, Europe and the U.S. in a section called Graphic Science.

Nervously, I went over and took a look...and this is what I saw: 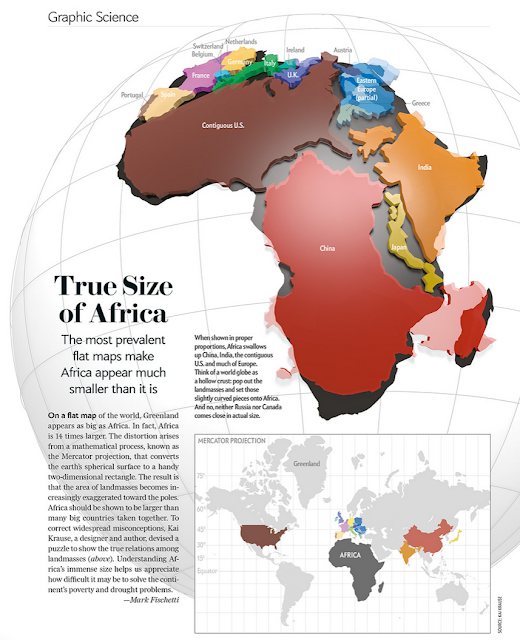 Now let's be clear, the aim of educating people that the Mercator projection distorts our perception of reality and that Africa as a continent has suffered more than most is commendable. Fighting immappancy (as Krause described this lack of understanding of geography) is also close to my heart. But using maps incorrectly is where I get all cartonerdy.

You'd think, perhaps, that Krause might have taken some of the criticism on the chin and used this update as a way to correct his own immappancy. You'd also think that in a publication that profers the importance of 'science' that accuracy might be important. You also may presume that anything in the 'Graphic Science' section would be scientifically accurate in its visual display. Let's see eh?

Like many, Krause has embraced 3D. People love 3D. It looks cool and literally gives maps depth. So this new graphic is attention grabbing because of it's three dee-iness alone.

However - 3D blocks in perspective wrapped round a globe creates visual distortions. In just the same way that on a flat map that uses Mercator the north and south are distorted relative to the equator, on a virtual globe we see distortions in the relative size and shape of features as they move away from the viewing point - the point closest to us as map readers. China therefore appears predominant and his rendering of Western Europe starts to diminish as it begins to wrap around the curve of the globe. So, visually, comparing like for like from a single point of view on a 3D perspective drawing (or globe) isn't a good way of showing comparisons...particularly when it's based on the relative size of areas (I wrote of these issues in a separate blog).

Notwithstanding the visual problems with interpreting the relative size of shapes across a curved surface, if Krause has at least got all his shapes in proportion during the construction of the graphic then we might at least be able to assume some semblance of relative size. BUT...the sizes and shapes didn't quite look right to me so I popped open my GIS package of choice and played with some shapes.

Given I re-drew the original 2D version I thought it only natural to re-draw the 3D version so here's my attempt at re-making his map with the same countries on a virtual globe: 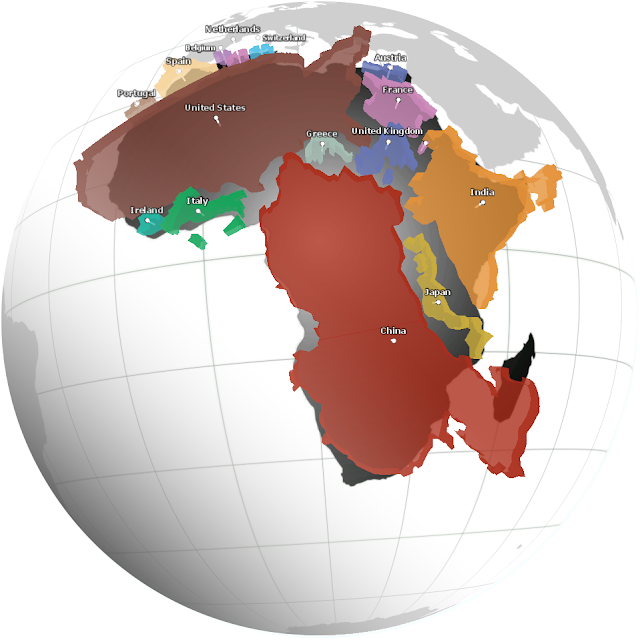 I had difficulties re-making his map like-for-like for the simple reason that the real world shapes are not the same as he presents. Here's where Krause's map seems to fail:

Of course I'm being cartographically pedantic again but if the very thing you purport to show is misrepresenting reality I don't think artistic license is a sufficiently good excuse. Yes, you could argue it's only a little bit wrong but if you're going to do something, why not do it right? Few who look at the new graphic will even think to question its authority and they will glean a distorted picture. That's the real issue.

The world will likely jump on his graphic and proclaim it as a great way to visualize differences in the size of areas. Like his 2D attempt, it's inaccurate. Will anyone care? I do. Should I have made a 3D version? Probably not. The 2D version is far more useful at supporting visual comparison of areas. Adding perspective and extruding the shapes to volumetric blocks just adds unnecessary visual noise that creates problems for our human processing of the map's message.

ht to @cartocalypse for the link
Posted by Kenneth Field at 16:21