Another day. Another hyperbolic map

Hyperbolic - of or relating to hyperbola, an adjective describing something that is overstated or exaggerated. And so to today's hyperbolic map. 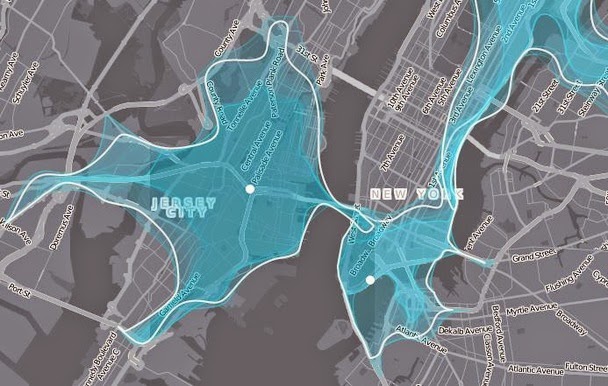 The work is called Isoscope and is by students at Postdam University under the guidance of Till Nagel. The write-up is in The Atlantic by John Metcalfe entitled 'A striking new way to visualize mobility'. Well...'new' and 'striking'...what a fine way to start a Monday morning. I checked out the article hoping to be cartographically amazed. Only, once again I found myself exhaling a deep sigh. Metcalfe describes Isoscope as a 'beauteous, immersive experience'. He also litters his piece with other glowingly positive terms. It's also Infographic of the day over at FastCo Design. Good grief. Is this hype just the reporting?...

I went to the project web site itself to be told Isoscope is an approach to capture the rhythm and pulse of the city; to find the boundaries of reachability, organically. It reveals traffic infrastructure, connectivity and natural boundaries. It's all about mobility and urban morphology apparently. but wait...mobility is way more than how far you can drive in a given time. It's more than cars...it's public transport, it's bicycles, it's the provision of safe bicycle lanes, it's pavements for walking on, it's a reduction in barriers (physical or socio-economic), it's about levels of fitness, disability etc...

Now let's be clear here...this is a student project. It's fine. It's teaching people how to use APIs and to make online maps. It's a fairly neat effort but...leave it at that. But no...not only does the project web-site over-inflate the work but then it gets regurgitated by a news media site hunting for any copy it can find to 'amaze' its readers for the few seconds they pass by.

Why we have to read about it being the next most amazing thing we've ever seen baffles me. It's not new to people like me. In fact, it's not new to anyone because this sort of work has existed for decades. Now if you are unfamiliar with it, that's a different matter but just because you weren't aware of this type of map does not, in absolute terms make it new. If it's the first time you've seen this sort of map do you not wonder if anything like it has been done before? How do you know what you're seeing isn't a rip-off, or poorly executed? Do you not approach such work with a hint of skepticism or at least a semi-critical mind? If not then you're lost my friend, you will read every new piece of hyperbolic cartography placed before you and neither care of its quality or efficacy. Like anyone, I love to be amazed and to see new and interesting work in my field of expertise. It's what pushes us forward and keeps things interesting. But too much of what gets passed around at the moment is neither new or amazing.

In terms of this map, you probably won't care that it's just an isochrone map...a 'service area' that can be calculated from a given point to all other points that fall within a search distance based on some criteria - in this case drive times as specified in a database. The term isochrone was coined by Francis Galton in 1873 "[I] propose to employ the word isochrone (equality of time) in a special sense..." (hat-tip to Joshua Stevens for reminding me of this). In fact, the use of isolines (lines of equal value) in map-making can be traced back to the 18th century. The Halley isogonic map (below, of magnetic declination) is possibly the first use of contoured curves of equal value. It was published in 1701. 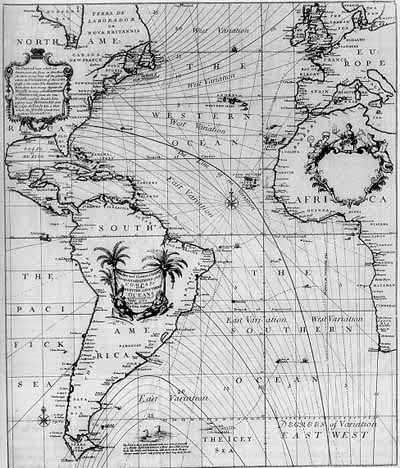 That's over 200 years of prior art...and we've been making isoline maps and isochronic maps ever since. Don't believe me? Check out Google Images using the search term 'isochrone map'.

So back to the Isoscope application. It's simply a way to show isochrones for certain temporal distances around a point the user adds to the map. It calculates drive times based on a model of traffic condition at different times of the day in relation to the maximum speed limit of the road segments. So it's really a time-slice isochrone map capable of showing us different views at different times. You can also add a 'pedestrian' isochrone to show how far you can walk in a given time. Except it's not very accurate.

Here's a 10 minute drive time isochrone around where I used to live in London at peak morning rush hour. 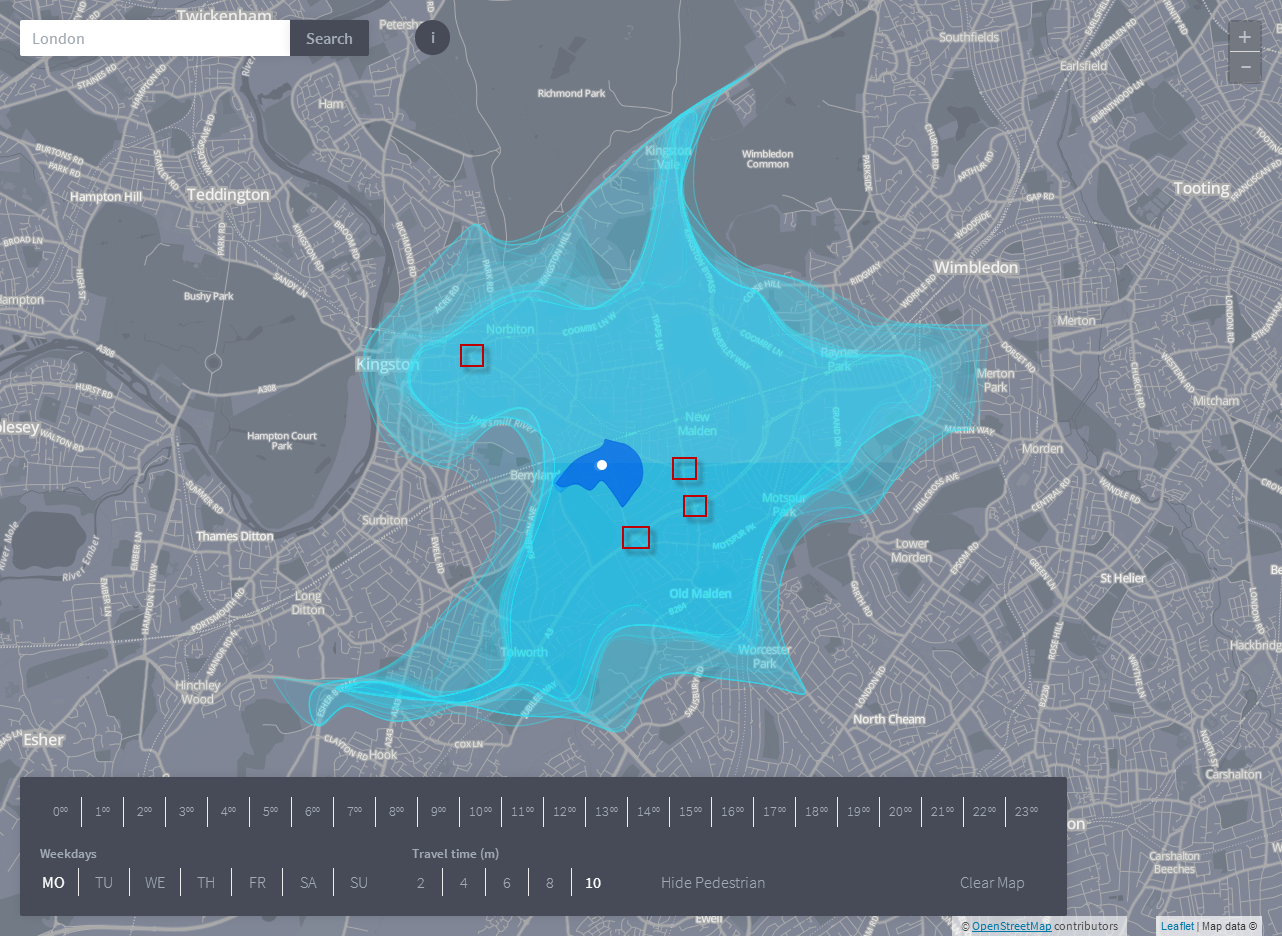 It's wrong. It's hideously wrong. I added the red squares highlighting a few key junctions where you may be backed up for 20 minutes or longer. These critical junctions in the network would dramatically reshape the isochrones. I know because I needed to get to the University from my house - so much so that I switched to a bicycle and also walked. It took 12 minutes on a bike and about 25 minutes to walk. So let's zoom in and check out the 10 minute pedestrian isochrone. 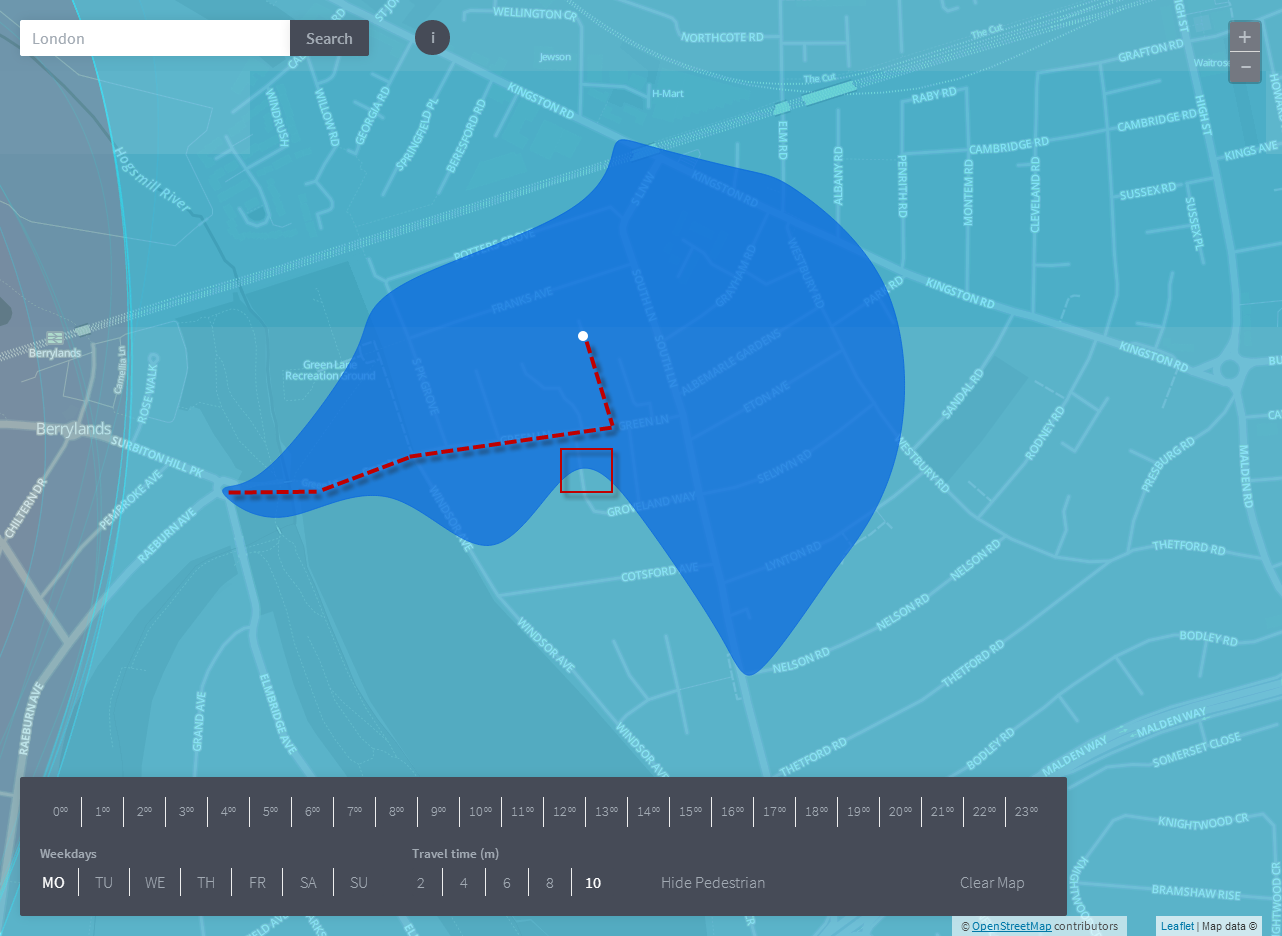 I added the red dashed line - it's a distance of about 1200 feet (360m). That segment of the journey used to take me about 4 minutes. And what happened in the area I marked with a red square? There is no barrier, no impediment to walking to there in about 1 minute from my house. It's just an irrelevant blue blob that does not in any way represent where you can reach within a 10 min walk from my house. However nice you think the map is...it just lied.

So the map is, as with a lot of maps, only as good as the data you pour in. Maps made by people in one city, yet creating a map for the whole world because the data exists...except the data is really not very good at doing the one job it's supposed to be doing and no-one bothers to do any ground-truthing or checking. Why? Because we're more interested in creating a beauteous, immersive, new and striking map than being overly concerned about the content (that and it's not really feasible when you're trying to map the world). But wouldn't you check areas you know well? Does the data actually do what it says or not? perhaps some estimation of error might be stated so we can proceed in our own interpretation with caution?

In terms of design, the use of a dark basemap and bright, single colour polygon overlays, with a nice dose of transparency isn't particularly striking either. We've seen a lot of maps styled that way recently.  Don't get me wrong...I like the look (and have made maps with a similar aesthetic myself)...but it's not new or striking. As for the typography? It's a little clumsy.

So, I wonder about all the things I am unfamiliar with that may also be new, or not as the case may be. Open your eyes people...go beyond the rhetoric, the marketing, the tediously simple journalism and learn a little of what you're consuming. A very good student project yes, but not a new or striking map.

I wonder what hyperbolic map will drop across my desk tomorrow?