The Underground Map of [insert here]

Tube maps. Beck's is beautiful. One or two others work.  I currently have a collection of over 170 copies, parodies, imitations and fakes; most of which are just tedious.  Simon Patterson published The Great Bear in the early 1980s which kicked off the craze of using the Tube map as a canvas on which to hang your own crazy idea.  I gave a talk at the International Cartographic Conference on this very issue as myself and collaborator Professor William Cartwright feel it's time to leave the map alone (slides here).

And then today this pops up... 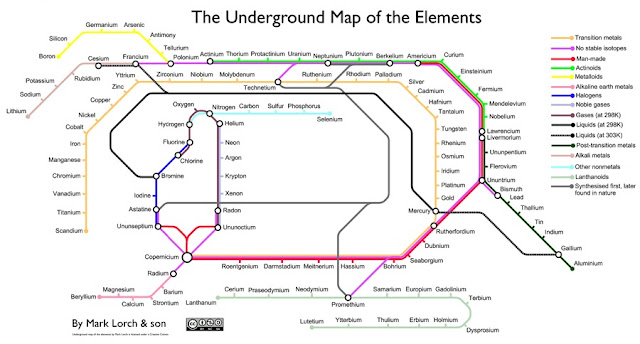 It's a tube map of the elements in the periodic table. There's a write up in The Guardian. It's a map made by Mark Lorch, a Senior Lecturer in Chemistry at University of Hull.  Now I don't want to be too disparaging because no-one likes criticism but in my opinion this guy has clearly spent too long in the fume cupboard.

What was he thinking?  The periodic table is a masterpiece of clear, efficient design that captures the organisation and relationship of the elements perfectly. Dmitri Mendeleev is credited with the first fully published version in the mid 1800s and, like Beck in the 1930s, clearly took cues from previous work but sprinkled a bit of magic to create a definitive masterpiece.

If you are going to have a stab at re-designing such a classic start with a blank canvas and think creatively. Instead, Dr Lorch decided to plagiarise Mr Beck's work and use it as a basis for this Frankenstein of a tube map derivative. Many have done so. Most fail but at least they are usually trying to make a map of some humourous nonsense. This plumbs new depths as it takes two classics, rides roughshod over one while destroying another.

A few years ago such nonsense would have never seen the light of day but now it gets top billing on The Guardian's web site for all to see and it's already racking up the obligatory likes, re-tweets and suchlike.

h/t to @Jon_Two and @williamscraigm for ruining my morning by alerting me to this.