Would it be acceptable to call The Guardian's US Gun Crime Map a bit of a crime against mapping itself? 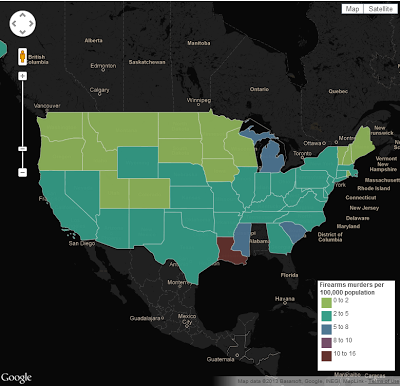 Good things about this map:

Bad things about this map:

Given the above, the following static map presents the same information far more effectively and avoids many of the problems I've identified. 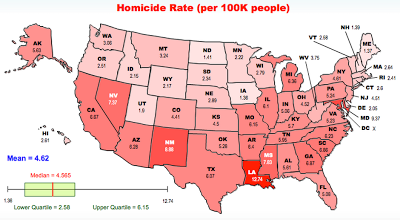 Don't get me wrong...this isn't about avoiding web maps and reverting to static. It's about making the right choices for the data you're trying to map. In this case, the person who made the static version has thought about how to make the map. We can see the actual values so there's no need for a legend. The patterns of "more" and "less" are more easily seen. Areas are preserved through the use of a conic projection. Labels are on top and there's no background clutter. We're not diverted by interactivity that doesn't reveal anything. I'd probably not use red in the title and the State abbreviations are not going to be understood by most outside the USA.

Bloomberg Businessweek also went for a static version and used the map to make a comment about comparisons with international murder rates. 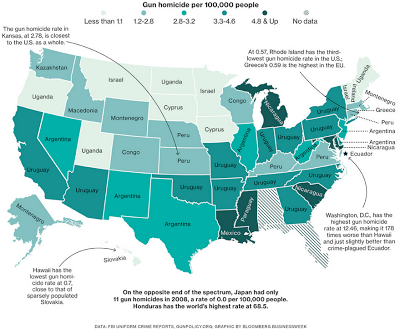 OK, they have an overlapping class (at 2.8) but the data hasn't been horribly rounded to a single integer. What works well about this map is the comparison. Without comparisons the story is flat. While we can say one state has a higher rate than another the data is given an extra dimension by being compared to international rates.

As an example of a terrific web map on the same subject, Gun homicides in America by Jerome Cukier is everything The Guardian's example isn't. 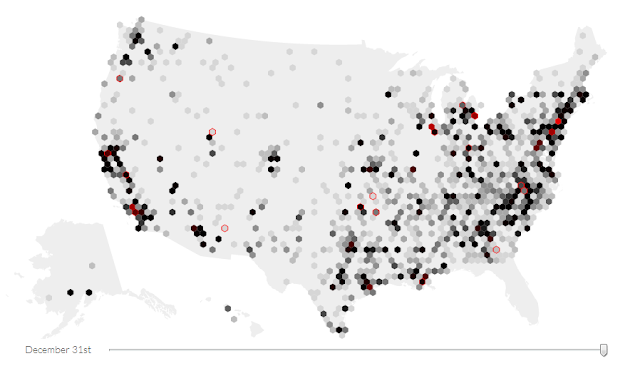 It's not the same data (it's 2010) but it shows what you can do using web technologies (in this case d3 used to great effect) to add value to the map.  The web page itself provides access to all the detail. The map leads the page and shows finer resolution data but it's a single dataset so it's presented at one scale. No need for pan or zoom. It's time-enabled and shows the cumulative pattern of murders during the year. Each murder flashes on the map and the greyscale pattern builds to show the overall pattern of quantity and location. This helps the reader find a location and also see patterns build. The map can show totals because each hexagon is the same size so visual comparisons across the map are preserved. Graphically clean and efficient; the functionality is intuitive and the data presented in tabular form below the map avoids some of the problems of trying to fit too much into a map-driven popup. The data can be sorted by field and filtered by clicking the map. A crosshair highlights a line in the table when clicked. A neat map, cleverly thought-through and expertly produced.

Of course, coding the map means you need to know how to but just look at what Jerome has been able to produce by comparison to The Guardian! Of course, The Guardian could have done a much better job using their approach so it's unfair to suggest the two are miles apart on the basis of a different authoring approach alone.

Knowing something about the academics of cartography doesn't mean you need to be academic but being cogniscant of the craft helps identify what to show and how. Knowing something about manipulative cartography also helps; by this I mean being masterful with your chosen technology. Couple this with a creative approach to representing data and you complete the equation. Whether you're going for static or interactive, getting it right is a combination of these skills and mindsets. The Guardian examples shows what happens when you get it horribly wrong. I see it as lazy mapping...just because it's easy to do doesn't mean you should do it. Taking time to understand what you're doing and crafting your map; making the best of what's at your disposal and making a high quality product simply gets far better and more purposeful results.