Getting steamed up over heat maps 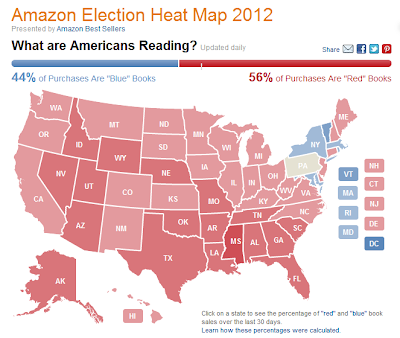 Notice anything strange?  (@briantimoney did, which is where I picked this one up). It's a Heat Map.  A what? I said a 'heat map'.  What the blue blazes is a 'heat map'? I'll tell you what it is...it's a made up name to make a map seem more edgy, more sensationalist, more...sexy. What you're looking at is a sexed up choropleth map. A perfectly good mapping technique, given a new name by Amazon because I guess the term choropleth seemed a little outmoded.  Why not go the whole hog and call it a heat-o-graphic? Actually, why not just give the map a decent title like 'Election reading preferences 2012'.  tell it how it is.  Call a spade a spade and we get it.  Instead, we have to wade through a nonsensical title and then a subtitle "What are American's Reading".

It's along the same lines as 'hot spot map'...that's a map that shows clusters of something. The word cluster being a perfectly good descriptor and, also, having the benefit of being a shorter single word yet hot spot is somehow preferred.  Does it make the map more plausible, more understandable or merely more sensationalist?

Now that the point of this blog has been vented, let's dig a little deeper and see if we can't find some other interesting perspectives...

The map itself shows the distribution of 'political book' purchases from Amazon in the last 30 days, where the books have been categorised as red (Republican Party), blue (Democratic Party) or neutral according to their political reading. Each state's colour is assigned based on the percentage comparison of the top 250 selling blue books compared to the the equivalent red books.  States with a higher percentage of one type over another are coloured in darker shades.

So what does the map show?  It clearly shows a strong leaning towards Republican favoured reading material (oddly for Brits this is a source of constant confusion...Republicans are right-leaning Conservatives, which we designate using blue in the UK!!!). There's a few problems with this.  Books are rarely so overtly Red or Blue so making such a divisive classification adds unfathomable bias into the map.  Does it show a Republican wave taking the US by storm?  Does it show that Republicans tend to read political books more? Does it show that Democrats are buying Republican reading material to figure out what alternative policies and views might be out there? Or maybe it shows that publishers are more likely to either publish right-leaning books or, perhaps, market them more effectively to an audience more willing to consume them? What is clear is that the map does not in any way reflect possible voting patterns, yet by using the same approach as we commonly see on choropleths, sorry, heat maps, of election results we cannot help but make that association.

As a way of seeing what's selling in spatial terms it's quite useful. You can click on each state and see what the top selling political books of each persuasion are.  Here's California's selection which although showing 51% leaning to the red, it's worth noting that California is an avowed Democratic State proving that those who read might not be those who vote: 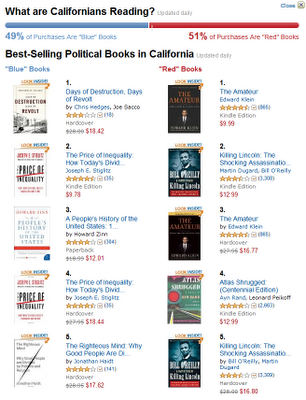 Now wait just a minute...The Price of Inequality on the left and both The Amateur and Killing Lincoln on the right are each listed twice. That means they are counted twice...that means the assumption has been made that different formats of the book indicate a single independent purchase.  What if people buy multiple editions of the same book? That could easily mean the map shows that Republicans for some reason tend to buy multiple editions of the same book more than Democrats. So we also potentially have double-counting in the data to contend with.

So it's not actually an election map at all, let alone a heat map. In fact, it doesn't even go to the extent of showing us whether 'other' books are far outweighing political reading material which would be interesting in its own right. What we actually have then is a choropleth map showing spurious sales data in its crudest form.  To be fair to Amazon, they don't try and hide what the map shows or how it has been represented. I guess they just decided that a choropleth of sales data isn't a particularly sexy map to get people interested in...