How to rapidly assess the quality of a map 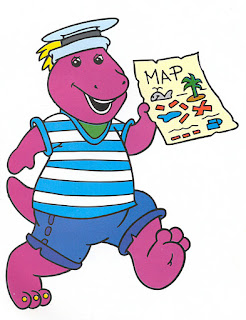 The problem of this is that it is largely nonsense instigated by bureaucrats. It is a way for University administrators to establish pseudo-objectivity across every aspect of course design, delivery and assessment. It was meaningless and created unnecessary administrative burdens. Truth is, a good academic can assess the quality of a piece of work very quickly. In fact, I used to tell students in their first weeks of University that I could predict broadly their degree result right there and then. I was broadly right in my assessments. This is true for essays, for practical work and...maps.

So how do we assess maps and what do we look for? In setting up a marking criteria for courses in cartography we can go to the nth degree in establishing what a particular map should contain, what it should omit etc. There are, however, far simpler ways to test whether a student has prepared a map well. You just have to look at the basics. If they've got the basics right then the map works as a map. What they then do in terms of taking the design to a higher plane is where we distinguish the average from the truly talented cartographic designers; those that create purely functional from those that add in aesthetic appeal capable of drawing people in; and those that make the effort and deserve the credit from those that are playing their degree by numbers.

So here's my ten (well, thirteen...) things to look out for to rapidly assess the quality of a map. This works for any map whether a student effort, your own piece of work or if you are judging. These are things that if I see I immediately infer sloppiness, a lack of knowledge and understanding and a lack of care that begs the question of how much time I should spend looking any further. In truth, if I see these sort of characteristics I quickly move on to something else which may be more deserving of my time. In fact, you can assign a mark to work that contains these sort of errors in a matter of seconds and move on quickly. If the student passes these basic tests then I spend longer and truly assess the extent to which they have designed a high quality cartographic product. So, my former students....if you ever got over 70% you passed these basics and I then spent quite a while looking at the work in detail. In truth, you should ALL have passed these basics.

1. Choropleth, not Chloropleth. My top annoyance is not even knowing the name of the map type you’re employing. How many people do you hear stick an 'l' in choropleth? Chloroform, chlorophyll; chloroseptic yes...but chloropleth...errr no! The elements in the word choropleth are derived from Greek. Choros (place; area/region) and Pleth (value) [thanks to Jeremy Crampton for pointing out a mistake in the original post that I have corrected here]. Hence we are mapping values at a place. The number of people who become indignant when this is pointed out is astonishing. Trouble is, it's a dealbreaker because you lose all confidence in their understanding of cartography.

2. 'This is a map to show': I was always taught by my academic tutors that you NEVER write this on a map...or the word 'legend' for that matter; worse, 'key' because a key opens a door...a legend tells a story! It's tautological. Of course it's a map. You've no need to tell people they are looking at a map..get straight to the title (and keep that brief and informative). This is relatively simple but all too often overly elaborate titles are used to mask a lack of content...something to fill the page.

3. Wrong projections: if you're relying on equal areas to tell a story, use an equal area projection, If you want to measure angles (e.g. for navigation), use a conformal projection. If you want to make an ugly world map...use Mercator. In essence, you cannot afford to ignore projections. They are fundamental and at a stroke can utterly destroy your map if you select the wrong one.

4. Legends that contain filenames: This is simply an example of the fact people are too lazy to change labels in legends. Most GIS software will take the layer name from the filename. How many times is this appropriate? Chances are it's not...so change it!

5. Totals instead of proportions: This is a problem so often seen on choropleth maps (and virtually always on chloropleths!). Put simply, a choropleth map shows data comparatively across the map. You have to use proportions, ratios or percentages. Totals take no account of the size of individual areas so a denominator MUST be used to normalise the data. If you use totals your map is worthless as it reveals completely incorrect patterns. I once spoke to a gentleman from the Forestry Commission who told me he’d spent his whole life mapping totals on his choropleth maps. He seemed quite disappointed to learn they were all meaningless. Consider an area 50 sq miles that contains 500 people compared to an area 10 sq miles that contains 100 people. If we map totals, the larger area with more people would be mapped darker than the smaller area with less people. However, both contain 10 persons per sq mile and are exactly the same in their essential character - the density of their population. They should therefore be symbolised the same so we can properly see this characteristic when mapped.

6. Accurate construction technique: This could be a lengthy issue but the simple advice is to learn what the map type is capable of conveying. Choropleths do a specific job, so do proportional symbol maps and so do dot density maps. They all have specific considerations to optimise their use so learn them and apply them. Decide whether your data is appropriate for a particular map type rather than starting out with your preferred map type and forcing your data into it. Need to create a surface but can’t decide whether to use Inverse Distance Weighted of spline interpolators? Or maybe try that Kriging thing because it sounds so much cooler? Spurious interpolation is easy to spot so learn what suits your data.

7. Misaligned map components: Nothing makes a map look like a rush job than poorly aligned map components. Titles that don't align with map edges or other map components that are randomly placed in available map space. Legends that are misaligned or, worse, individual legend items misaligned within the legend. Use rulers, grids, snapping, alignment and justify tools, that’s what they are there for. Use space to create balance and harmony throughout the whole map page.

8. Over saturated colours: Most naive mapmakers over-saturate their colours. There's simply no need and all too often it conflicts with the basemap anyway. Go for subtle and you'll find the map is so much better to look at. Remember that screen colours almost always don’t look good in print. If you aren’t sure whether your colours are over-saturated just try taking them back 10-20% and I’ll almost guarantee the map will look better. Thinking of using white or black at either end of a choropleth shading scheme? Don’t! It implies nothingness or totality...both of which are probably not expressed in your data. White can also easily be confused with the map background.

9. Labels that are too large: Possibly the most ignored aspect of map-making is lettering. And possibly the most common mistake is making them too large. Why? Because you want to be able to see your labels when you are designing and the temptation is always to make them larger than necessary. They therefore become dominant and overbearing. Try 6pt...or 5pt for some labels. You'll be surprised at how much tighter the map looks and how much better the labels will integrate into the display.

12. Reliance on software defaults: Simple...don't do it. You will regret it because you map will be awful. No software knows what you want to map and what the message is. It'll get you much of the way in giving you a canvas with the basic components but YOU have to spend time working to make them better. It's not difficult in most cases...it just takes time and time is what makes an average map good and a good map great.

13. Spurious mashups: A vast subject in its own right. It’s simple to see when someone has a dataset and for some reason best known to them they feel an impossible urge to map it. Maybe they think it’ll make them look clever because they can plant a load of garish point markers on top of today’s favourite base map service and serve it up to the unassuming public. But is the map any good? Does it do justice to the data? Does it say anything? Flashy web maps attract attention but is it the kind of attention you want? Do you really want people to look at basic errors?

So why offer these? All too often professionals, let alone students, let themselves down by not taking care in their work. When it's pointed out some take offence (a colleague of mine once said they can take the gate post as well!!!), some become angry and indignant; worryingly, some fail to see the error at all. This sort of sloppy cartography is rife and not only does it damage the map’s ability to communicate a message but it damages your credibility and authority. Remember, design isn’t just about making things pretty, it’s about making things work & that means representing data accurately and clearly. Designing an effective map starts with knowing the basics and not falling into the pitfalls I’ve outlined here. It’s not difficult if you know what you're doing. Or maybe that's the problem...in which case find out before committing pen to paper (or mouse to screen)!

Clearly this list is not meant to be taken literally...they are indicators. These sort of errors set off alarm bells to any cartographer (practising or academic) that knows their craft. It infuriates. I doubt this blog will save the world from such cartographic failures but hey, if even one person uses this list to check their own work I'll be pleased. For those that feel I'm making a fuss for no reason then you have already failed. Just stand back for a minute and ask yourself if you REALLY know what you're doing. If not, take a moment to learn something that'll improve your map. If you need to ask someone...ask. The final thing that infuriates cartographers is when people don't ask. You know, we might actually be able to help!
Posted by Kenneth Field at 15:09