Choropleth maps hold a certain fascination for me. More specifically, a fascination with how so many people get them so wrong. They are a really simple map type but there are numerous pitfalls. Here, I take a brief look at a couple of published maps that show what sort of issues arise through poor data processing, classification and design. 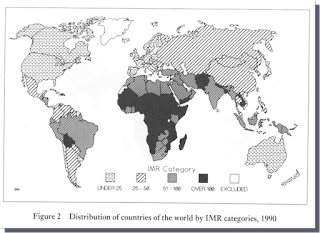 First off, let's look at two figures published in the Journal 'Area' many years ago. Taking Figure 2 first, the data presented is Infant Mortality Ratio (IMR). It's data on a numerical scale and has been classified into four classes: under 25, 25-50, 51-100 and over 100. The shading scheme goes broadly from light to dark using a variety of pattern fills. It's not perfect but it does show areas which display similar characteristics.

The problem with Figure 2 is the use of black for the highest class. Black connotates totality and taken on face value, the map would appear to suggest total infant mortality in many African countries which is unlikely to be the case. Dark grey would have been more appropriate. Better, the scheme should not mix pattern fill styles. All dots or lines would be more effective, varied in width and density to create the light-dark effect. A secondary problem of using black is it masks the country borders. While we're on Figure 2, note that white has been used to show areas excluded from the study. While we are familiar with the world map, showing Greenland as excluded in the same colour as the map background isn't too much of a problem...but for choropleths in areas many readers may be unfamiliar with, avoiding using colours that clash with the map background is important so readers can discern what is part of the map and what is part of the background. 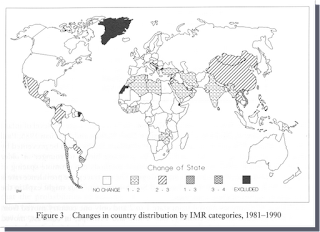 Turning our attention to Figure 3, it's now worth pointing out that these maps appeared on the same page. Figure 3 shows the change in IMR but here's where we begin to see major problems. The change of state is again on a numerical scale but it isn't defined. It's presumably % increase in IMR but we shouldn't expect the map reader to have to infer that. The classification of the data is also problematic with classes 1-2, 2-3, 1-3 and 3-4.

Take another look, yes, you saw correctly. There aren't just overlapping classes (where would a value of 2% go for instance?) but the classes make absolutely no sense. That's the tip of the iceberg. No change is symbolised in white...the same as the map background and also the same as the 'excluded' area on Figure 2. It could be argued that 'no change' is important and ought to be shown in something other than 'blank'. Just as black infers totality, so white infers emptiness...and clearly 'no change' is not the message communicated here. If we juxtapose the two maps on the same page, the reader already has in mind that white has been used on Figure 2 to show 'excluded' so do they similarly make that connection here?

Then we look at Greenland which is shown in solid black. But wasn't Greenland excluded in Figure 2? Well, yes...and it is here as well but it stands out as a really important feature now it's in black. Remember, darker features are more prominent visually yet Greenland is possibly the least important part of this map since it's excluded from the study. And what of the shading scheme across the numerical classes? There is no attempt to go from light to dark and the design simply shows a range of four arbitrary patterns. It simply doesn't work.

Now let's take a look at one final example from a different publication which was created by a former colleague of mine to show in- and out-migration. It amused my former students immensely that this map was produced by someone with 'Professor' and 'GIS' in their title. So what's wrong with this one? 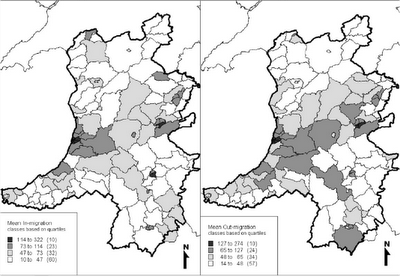 First of all...where is this place? Here we see the problem I alluded to earlier that unless you're familiar with a place the use of white for geographic areas and map background is a problem. In fact, it's Wales in the UK and the area on the left of each map is actually the Irish Sea, symbolized the same as land to the north of the shaded areas. So is it all of Wales? Well no...it's actually only a part of Wales and it's not clear what the external boundary represents or, indeed, what the internal boundaries represent. They're possibly some census reporting areas but it would be helpful for this to be described in a title. Oh...there's no title, OK, let's move on to the legend. Well we've got that old favorite...overlapping classes on each map. This could simply be a labelling issue but equally, it's unclear where values on the class breaks actually get reported.

We've also got shading problems and while a dark grey is used for the upper end of the scheme we have white for the lowest class which isn't, actually empty at all. Now take a look at the small area just above left of the north point. It's shaded yet not inside the apparent study area boundary. So it's been included in the data processing and classification but is on its own on the map. What do we infer from this? I've no idea because it's unexplained but if it isn't part of the study area then it should be excluded from the classification...and if that's the case the whole classification scheme is out by a fraction as there is one less area to map. Finally, we get a north arrow (when it isn't really necessary on a choropleth) yet in addition to lacking a title we also don't get a scale bar or an inset map showing us where this place is.

So the moral of this story? Firstly, be careful when you create a choropleth to ensure the data processing, classification and design make sense and readers see the patterns properly without confusion. Secondly, don't always believe what you see published whether in books, journals or via the web.
Posted by Kenneth Field at 16:18