Only Maps and Horses

I increasingly hear quite a lot of the latest buzz about this map and that map but where is this noise coming from?

We're seeing the maps we're seeing because of one thing...ubiquity and ease of construction has created an appetite for them. Where there is a demand, someone is always going to meet the demand. The demand at the moment however is for quantity, not quality and there are plenty of middle men anxious to provide a mechanism to push their wares. These are the Del 'Boy' Trotter of the cartographic world. Buy cheap, Buy quantity, Sell at a markup and without a care for the consumer or the quality of the product you're shifting. Think yellow peril...

Take, for example, 'Amazing Maps'. Their Facebook and Twitter pages have tens of thousands of followers and so on...the site exists simply to push maps that are found on the internet to their followers. I'm one of them but for every one that piques my interest and which I find genuinely intriguing, well made and purposeful, there are dozens more that fail on a very basic cartographic level.  Often the maps display disturbing mistakes.  I see them. So do other experts. But most do not...they are busy being experts in their own field and simply see the map, consume it and move on.  Take today for example...here's a map of the Winter Olympics medal count they pushed:

Anyone who knows anything about mapping will immediately spot two glaring issues...the data are not normalised and the colour scheme is truly unhelpful in allowing readers to rapidly see the patterns. Here's a version I made...it's not particularly attention-grabbing but it's constructed with basic principles in mind so we are better able to see the patterns. 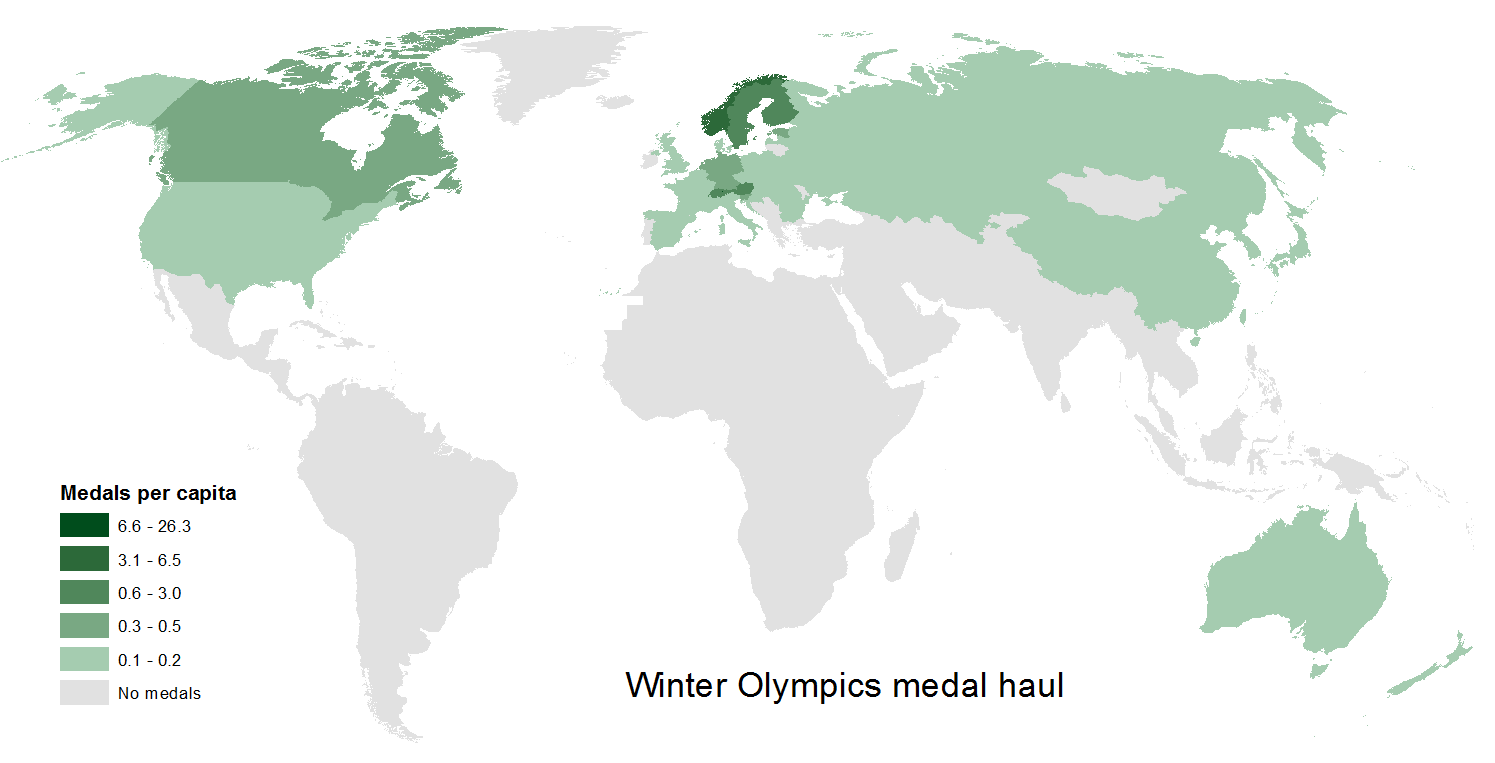 Not only are the patterns modified when you normalize so they can be properly compared against one another against a constant baseline measure but light to dark means less to more. I'm afraid spectral colours aren't read like that by humans - we see 'difference', not 'quantity' so although in the first example I can tell Australia has a different count to China and Norway...I don't know in which order. Purple 'looks' more than light blue (because it's darker) but if you look at the legend China has more medals. But once normalized, actually they have no more per capita than Australia meaning that they are pretty much equally successful. Sure, China gets more medals overall but then have a massive population by comparison so you'd expect more medals. We normalize to allow us to visually compare like for like. And are the USA really as good as the top map suggests being in the next to top class? No...given their population, actually their winter medal haul is relatively poor and on a par with the UK per capita.

So, back to the point...is the daily consumption of bad maps bad for you? I would say yes because you're getting the wrong message. It's a waste of map calories.  I'm all for quick and dirty maps made well...but not ones that are constructed shambolically and peddled to us by people who know no difference.

I mentioned this myself on Twitter a while ago and someone said to me that while they agree, they like fine restaurants but also dive into Subway on occasion.  I've used the food analogy before but I think it needs to be more subtle here. Sure...go to a Heston Blumenthal restaurant and enjoy fine dining. Go to Subway and enjoy a sandwich too.  Both different 'qualities' of food in all likelihood. However...would you want to go into Subway and order a meatball sub that comes with the meatball on the outside, trying desperately to envelop some bread? At least Subway construct their sandwiches according to the basic rules.  Bread on the outside, filling in the middle so it works on a basic level as a sandwich even though it might taste like crap (taste, of course, is a different argument altogether).

That, for me, is the problem with a lot of maps...they suffer from basic constructional issues that really affects their performance as maps. Yet the appetite is there because the 124,000 Twitter followers that @Amazingmaps has dwarfs the combined Twitter following of at least 50 of my map expert friends combined by some margin. Tabloid newspapers have higher circulations than quality broadsheets. The reporting is dubious. Same with maps...it's just that maps have in the last 10 years suddenly entered this realm of ubiquity so now we have professional cartographers along with good map-makers and not-so-good map makers and who cares who makes the map, how it's made or if it's any good because it all sells.

No-one seems particularly bothered who made the map and what their cartographic qualifications are when they peddle maps they find on the internet yet I would strongly argue that being authoritative in your domain is crucial in distinguishing quality work from the masses. It's therefore not the fault of the makers of map-making tools or the map-makers themselves that we see so many poor maps. Just like any service based on mass consumption, if the demand is there, there will be someone keen to feed it regardless of the quality. The demand is for maps, good, bad, big, small, whatever. There are plenty of people and organisations that have set themselves up in the last few years to satiate the demand purely to serve their own agenda of being purveyors of content. How many of these have any real cartographic credibility? Take a look...you won't find many publicly visible examples that have a strong cartographic background. Such sites are not curated by people who know anything about maps. That much is obvious.

Over at the International Cartographic Association blog we're trying to arrest this by providing a quality broadsheet version of Amazing Maps, set up as an antidote to tabloid cartography. I'd love you to go take a look and share the links if you care. We're running a daily series called 'MapCarte' where we're showcasing a curated map that evidences high quality classic and contemporary cartography. Beautiful maps, made well and described to explain something of why the map is regarded highly.

Maybe the Twitter handle @AmazinglyBadMaps was taken? In truth what they're peddling is potentially interesting data mapped poorly. It's like Del Boy's paint...perfectly decent paint but painting a Chinese restaurant in British Rail luminous yellow just doesn't work. If you prefer eating at a decent restaurant rather than Del Boy's painted Golden Lotus then head over to MapCarte and gorge yourself.
Posted by Kenneth Field at 14:41