When The Proclaimers released Sunshine on Leith in 1988 I was just about heading off to University (to study cartography and geography - that bit is important). They were not to my musical taste...why would I want to be beaten up for liking such a dreadful duo? Little did I know that over 25 years later I'd be making a map relating to one of their first and most celebrated ditties I'm gonna be (500 miles). If you want the background read on...if you want to see my map, scroll to the bottom.

An attempt to answer @DragonXVI's fundamental question - Where the hell were the proclaimers actually walking to? pic.twitter.com/AYXs4IXTli
— Hazel McKendrick (@HazelMcKendrick) May 19, 2014

Now it's clearly tongue in cheek and fair play to Hazel McKendrick...I haven't seen anyone tackle this cultural dilemma before and she had a good go. Where, indeed, were The Proclaimers going to walk 500 miles to from Leith? And what about the 500 more? Unfortunately she used two perfect circles at the nominated distance around Leith but too late, another viral map is born and all the usual suspects begin clamoring to heap praise upon it. 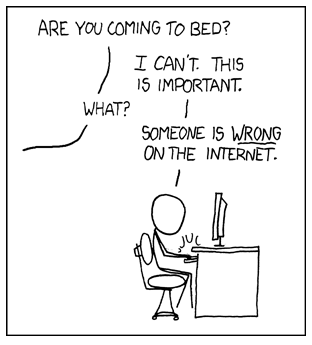 I and a number of map-minded people folded our arms and began finding fault because the circles shouldn't be so, well...circular! Yet again someone had done something wrong on the internet (thanks to Barry Rowlingson for reminding me of the well observed XKCD cartoon).

Great idea. Nice bit of fun but...wait...the Web Mercator projection distorts shapes and areas pretty markedly. If you draw a line indicating 500 miles around Leith on that projection it would not be a circle.

Here's the classic example from The Economist on the threat from North Korean missiles that made the same mistake... 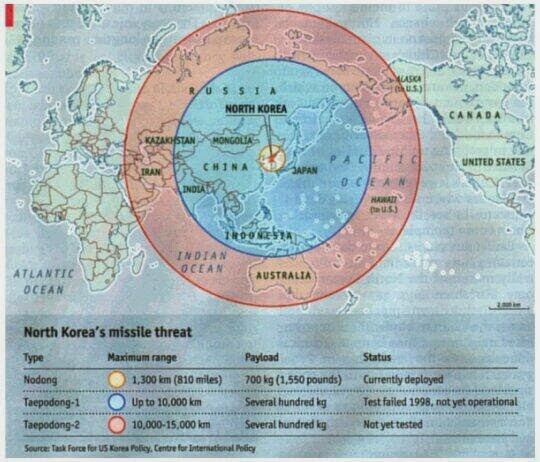 And here's the correction they were forced to publish after they had redrawn the lines properly and with respect to the projection used for the map... 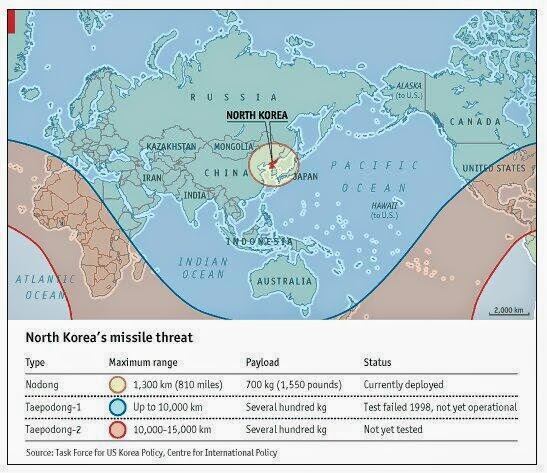 Now it's questionable whether marking the range of North Korean missiles incorrectly is more or less dangerous than the lyrics from The Proclaimers (I guess it's a question of taste) but either way McKendrick's map is wrong. And then what about the fact that reaching Iceland would require them to walk on water? Now we're stretching the bounds of their talent just a little far with that one surely!

So, as a self-respecting cartonerd I re-did the map... 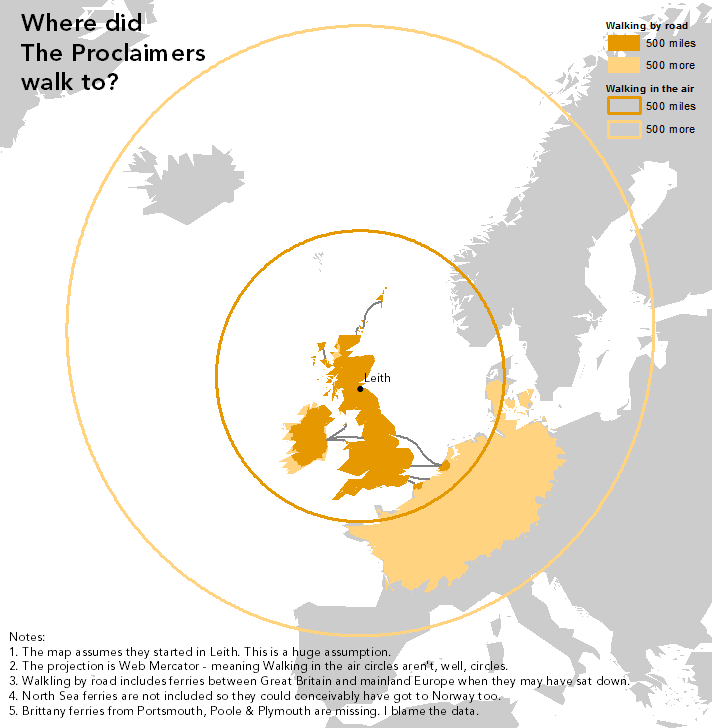 I still used Web Mercator and placed 500 mile and 1000 mile geodesic buffers around Leith (using the same huge assumption as McKendrick) to show the real distances as they appear on this map. These represent the theoretical extent of how far they might walk so if they went off-road and walked in a straight line that's where they would end up (notwithstanding the small matter of the wet stuff).

I also went a little further and used a bit on analytic acumen to calculate how far 500 miles would take them using the European road network. Then I calculated how far they could get by going 500 more. Those areas I show as shaded so we can see how far they would walk on land. I took some liberties...I presumed they only walked on roads and of course, they may know of sneaky short-cuts or go roaming cross-country. I also presumed the ferry journey's equated to a walking distance when they most likely sat down and had a rest (though if they walked round the deck then the eventual distances need reducing slightly)

It's not perfect (there's no North Sea ferries to Scandinavia and the Brittany ferry is also missing) but it's better than shoving circles on a Web Mercator projection and calling it cartography. The correct version applies knowledge of how maps work to make a sensible, correct map...even though the theme is distinctly daft and I still hate the song with a passion. I hate poor cartography more though.

That said, McKendrick's map has nearly 2,000 retweets at the time of writing. Mine? 88. Proof positive that actually nobody gives a shit about quality anymore...or when someone has gone to the effort of providing a correction they do their very best to ignore.

Update 2: I couldn't resist...I did a Where the Streets Have No Name follow-up map...and I'm now thinking of all the other geo-related maps that can be made. I'm calling them Lyric Maps.