I recently wrote a blog highlighting the problems of using transparency on choropleth maps when they overlay basemaps. Mike Bostock's recently posted "Let's make a bubble map" provided a really great tutorial on thematic mapping but also highlighted the issue of transparency once again. Here's his final map: 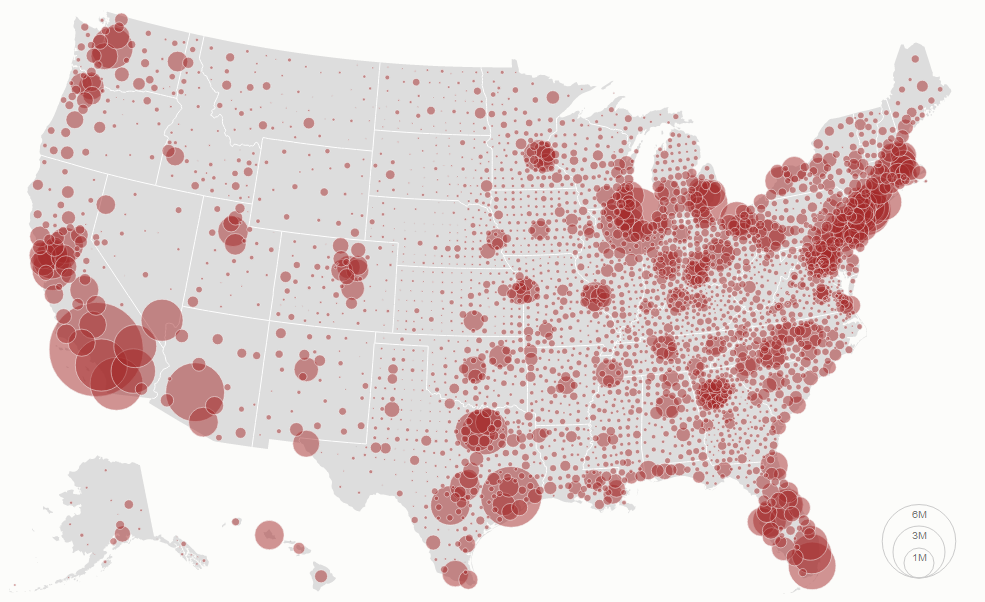 Look nice? Well yes, at first glance it does. It's clean, modern and pleasing to look at...and remember, these days most people are only glancing at maps so that first visual impression is oh so important. It's not just about looks, it's about the message we see with our eyes and how our brains are interpreting it. The use of transparency on this map creates a confused message because at first glance do you see size as important or darker colours as important? Or both?

There's a trend in online mapping in particular that uses transparency as part of the symbology design at every available opportunity. Modifying the alpha channel can be extremely useful and gives us a huge amount of flexibility to design symbols that work, particularly given the interplay of often complex symbology that competes for space.  It also allows us to produce some really pleasing effects. The problem here, though, is that applying transparency at an individual symbol level means that where symbols overlap you get darker colours. That's not a desirable effect when we're trying to communicate something about a quantity represented by a variably sized symbol...because it communicates something extra that is meaningless.

A proportional symbol is really just a geometric shape that reflects the value of a point or of an area (represented by a point). The overlaps have no spatial meaning whatsoever. Cognitively, we begin to confuse out estimation of magnitude (by seeing size differences) with another estimation of magnitude (lightness or saturation of colour). The use of transparency here creates a pseudo-choropleth effect that demarcates areas of circles as different to one another in some quantifiable sense. It's like seeing a load of stacked Venn diagrams where the overlaps have some additive property we should be mindful of. Except overlaps on proportional symbols are merely a function of proximity of the locations as well as choices made about relative symbol size. Overlaps do not mark out special areas where 'more' of something exists.

It's a confusing visual message. Additionally, where we see a large number of smaller symbols overlapping a larger one, the overlapped transparency masks the larger (more important) symbol. Look at the difference between the areas around Los Angeles County CA and then Cook County IL. How many of us miss the large symbol near Cook County because of the overlapping smaller ones? - yet it is similar in size to LA County, which just doesn't have as many counties nearby so doesn't get swamped. The overlaps are far more prominent on the east coast than the west simply due to the geography of there being more counties...but the increased density that we perceive through overlapping symbols causes an additive colour effect overplay the actual data magnitudes. By using transparency we're adding visual heirarchy to the symbols that show smaller darker ones as more prominent. That's at odds with a map like this where larger sizes should be at least on the same visual level.

Bostock correctly reorganises his symbols so smaller sit on top of larger. Then, instead of using transparency there are two more useful ways in which overlaps are dealt with to avoid the problems caused by transparency. First, the use of a border the colour of the background of the map is sufficient to demarcate symbols by effectively using cut-out effects. The symbols remain on the same visual level so we simply see the relationship between size and value. Like this: 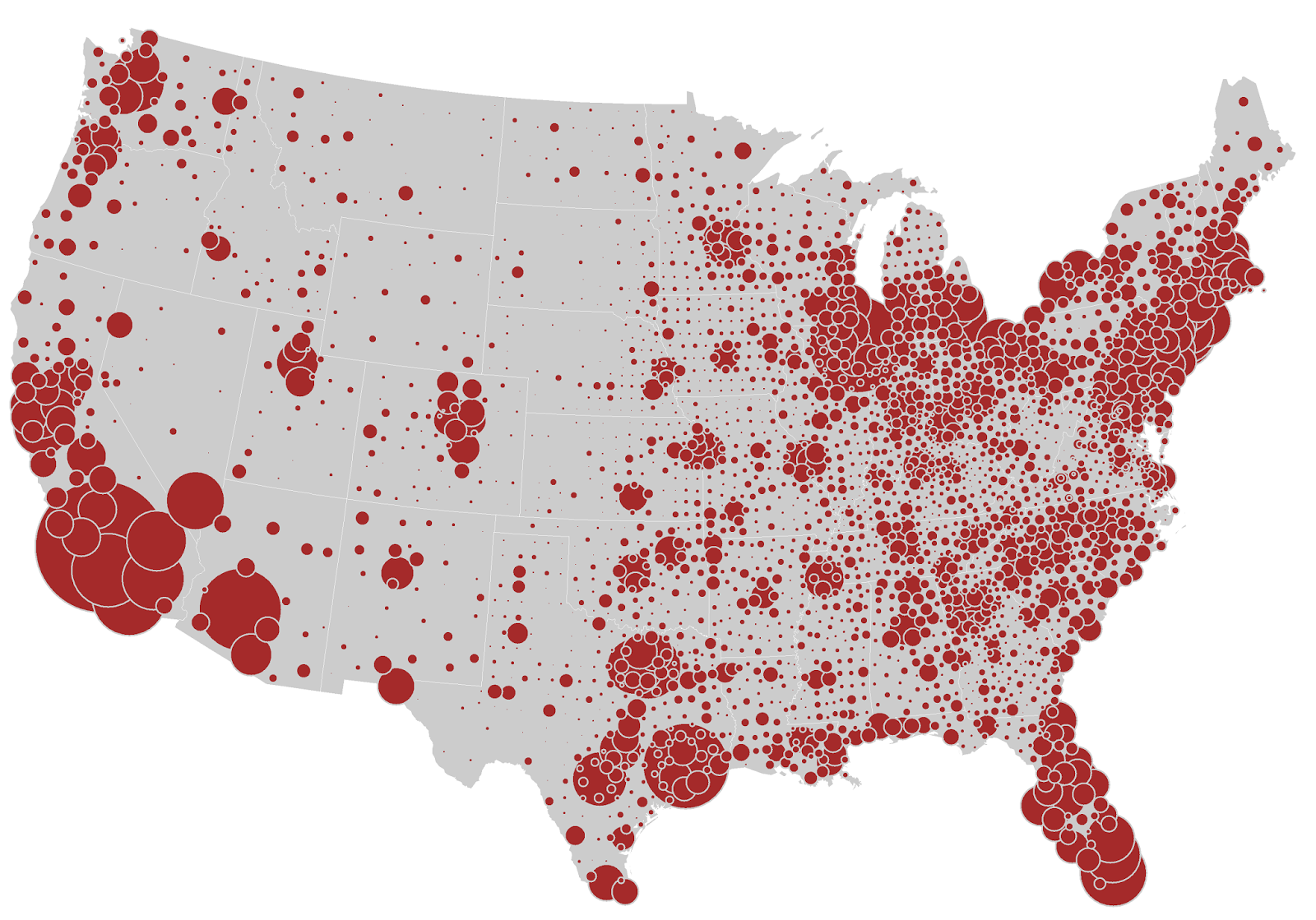 Alternatively, hollow symbols with a strong outline might be used. Again, this makes the symbols all sit on the same visual level so we see size of the symbol as the visual variable relaying the information. For this example, the sheer number of symbols may not make this as good an approach but it can be used to good effect in different circumstances depending on the relationship of the geography, data and symbol scaling employed: 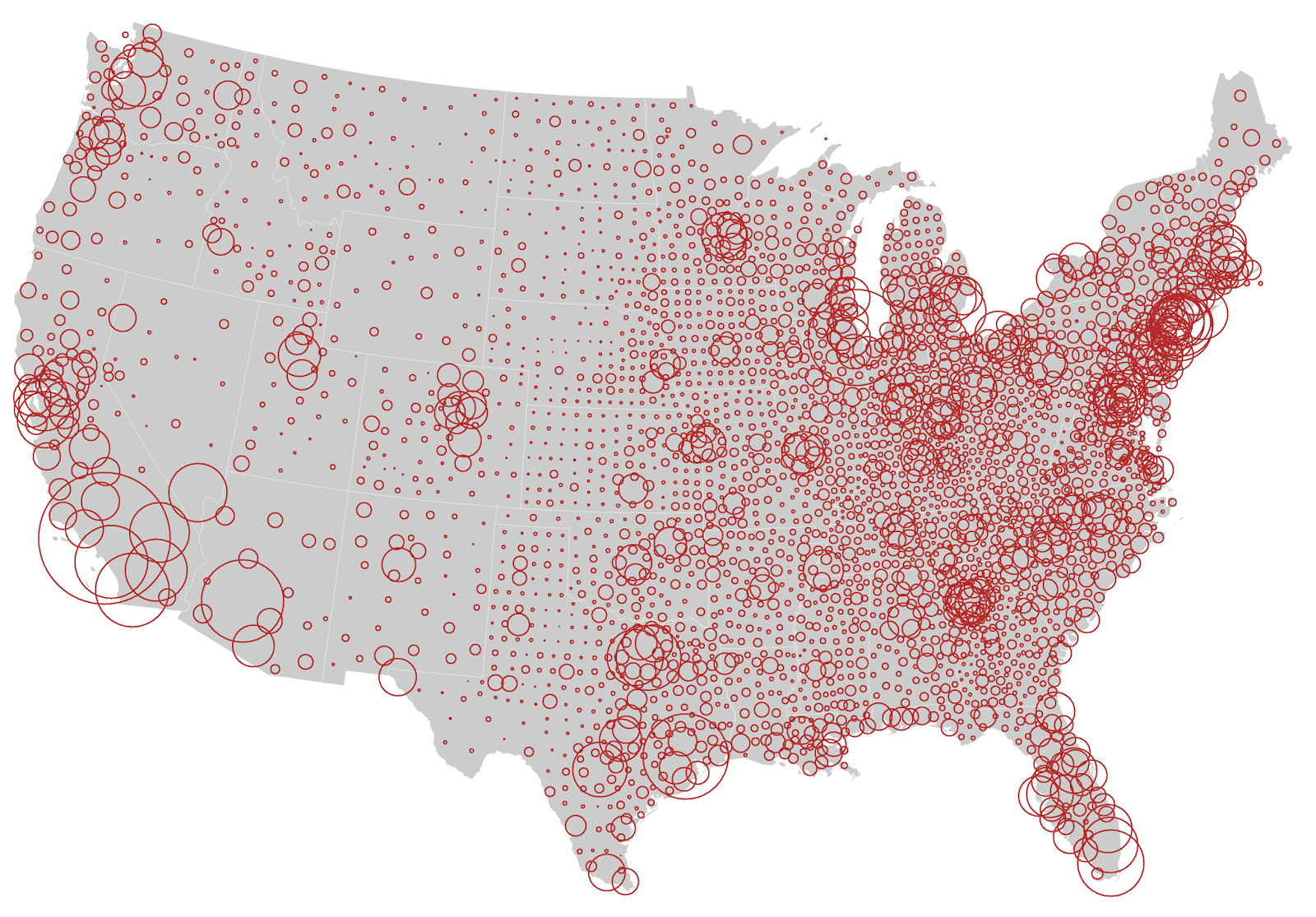 Bostock does a lot of other good work in the tutorial, not least pointing out the benefit of a decluttered basemap, or that we may consider using population weighted centroids as well as the need for strong visual anchors in the legend. All solid advice. The final version of his map as a web map adds a hover tooltip and also highlights the county by changing the border to black - a very sensible approach to give clarity to what is selected and to use interactivity in a useful way.

While I'm writing this though...there's one other niggle I have...the name: bubble map.

The long-standing term used to describe this type of map is a proportional symbol map. Now before someone calls me out on this and points to the fact Bostock notes this clearly at the start and end of the blog well yes, he does (he also refers to it as a graduated symbol map which isn't quite the same). So why persist in pushing a new term when a perfectly good one already exists?

Charles de Fourcroy is arguably the first to use proportional symbols in a graphic to show demographic data (he used squares...in 1782). We had to wait until 1837 to see proportional width symbols used for flow maps (Henry Harness). It was probably Charles Minard who then used the technique of making a symbol proportional to a value as part of his differently sized pie charts to show the origin of meats consumed in Paris...in 1851. And map-makers have been making (and calling them) proportional symbol maps ever since.
I appreciate Bostock probably wasn't the first to coin the phrase so it's unfair to pick on this example but it's symptomatic of a growing epidemic. Bubble charts are not new. They're proportional symbol maps. How much more perfectly decent cartographic history and relevant terminology is going to be reinvented? The connotation with the word bubble is that the symbols are circles. It's true that most proportional symbol maps use circles because they are often the most suitable (as in 'the perfect shape'). But here's a version with squares: 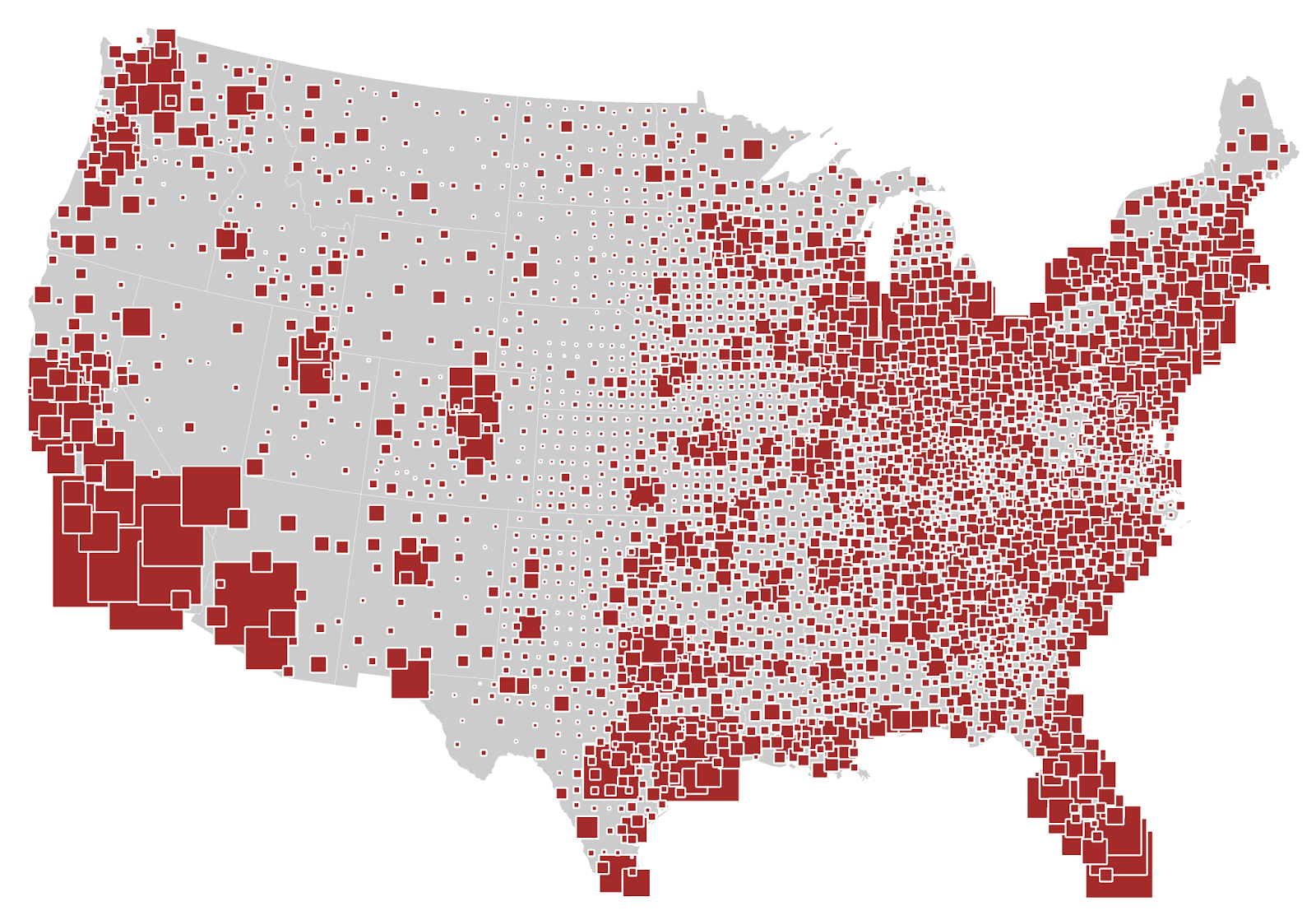 OK, I'd agree it's not as pleasing for this dataset but it can have its uses. If and when you use squares, hexagons or any other proportionally scaled symbol to map thematic data do we have do call them bubble maps too...or maybe each map sub-type now gets its own name...squarey map?

Transparency is your friend as a map-maker, but knowing when not to use it is as important as knowing when it can really help your work.
Posted by Kenneth Field at 10:40