About a year ago I was asked by Steven Feldman, Chair of the 2013 FOSS4G Conference, if I'd be interested in organising and curating a map gallery for the event. I jumped at the chance. The conference was being held in my home town of Nottingham, UK and it was an honour to be charged with helping out my geo-friends.

I have worked closely with Rollo Home and Barry Rowlingson, with support from the British Cartographic Society and International Cartographic Association, to get the gallery up and running. We decided early on to go for a 'digital' gallery meaning we weren't going to have walls pinned with paper maps at the conference.  This was initially controversial but in the new age of cartography I felt that giving space to new map-makers and focussing on digital media seemed appropriate. Paper isn't dead but this conference, probably more than many, demands the map gallery to move with the times. This was an experiment in some respects but I'm delighted to say that as the conference kicks off it's come together superbly.

We've had over 70 submissions and I have to say that as someone who often bemoans the lack of quality in modern cartography, I've been hugely impressed.  There are some truly impressive maps and on the whole, the collection represents a time-slice of map-making that showcases the state of the art as it stands.  Sure the tools to make maps are progressing at an astonishing rate and maps will mature and become far more nuanced as products but this is where we are at currently.

So I invite you to head over to the FOSS4G Map Gallery and take a look for yourselves.  You'll find one or two maps you may have seen before and a whole load you haven't. There are maps made by people you're no doubt familiar with and many more from names you're probably going to hear far more of in the coming years. 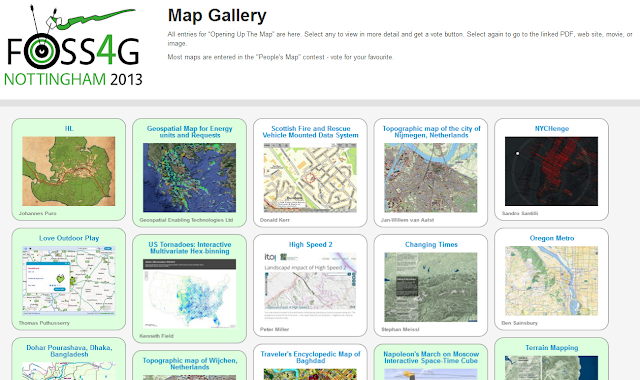 There are a number of prizes on offer for entrants to the map gallery competition. The categories of best data integration, best software integration, best cartographic display, best static map (digital display), best anti-map, best web map application and most unique map have already been judged by an international panel of map experts. The results will be announced during the closing plenary on Saturday 21st Maptember (yes, the month of September has been hijacked because of the sheer number of geo-events taking place in the UK).

There is one final prize available though...the People's Award.  And YOU can vote too because the voting takes place entirely from the Map Gallery itself.  Click on a map you like and a vote button appears.  The voting is open to the global community and not just conference attendees so if you like a map...let us know by voting.  Voting closes Saturday just before the winners are announced.

It's looking like it's going to be a terrific week of geo-fun at the conference.  The gallery lives online but is also being showcased in a 20 minute movie streamed via three large plasma screens on site.  You can watch the movie on YouTube.

We're also extremely grateful to our friends at CASA who have loaned us their iPad wall to display a patchwork of gallery entries. 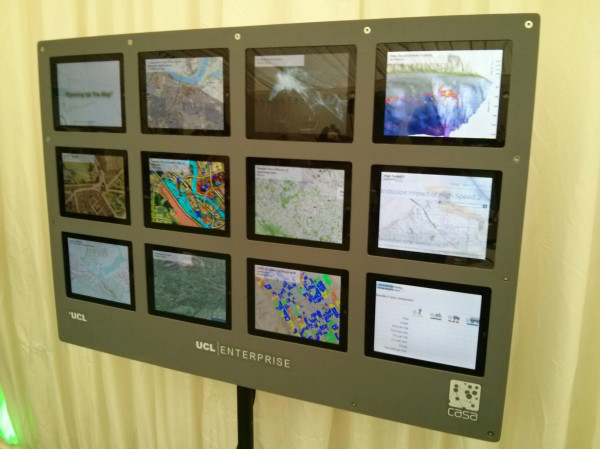 The iPad and plasma screens provide a great way of seeing the range of maps and soaking them up but please VOTE.

I'd personally like to thank Barry who has gone above and beyond in developing the technical backend to much of what we can see and use. Thanks.  Oh...and in case you're wondering, yes some of my maps are in the gallery because it was open to all but you can't vote for mine even if you were minded to. The last time I organised and then won a competition it ended very badly...student days, pub golf...those who know me know the story and if you catch me at the conference I'll share it with you. I learnt my lesson.

A HUGE thanks to all who entered. It's been a privilege to help organise the gallery and good luck in the awards!
Posted by Kenneth Field at 23:50