The dottiness of dot maps

Dot density mapping seems to be the new hexagon in mapping. We've seen iPhone vs Android neighbourhoods, locals vs tourists and languages mapped. The US census has been mapped as one dot per person. I had a bash at mapping the results of the 2012 Presidential election. There's plenty of others and Eric Fischer writes a nice discussion on some of the issues you have to contend with when making such maps (picking up some threads of a discussion I had with him after my previous blog).

And then we have The Guardian's "Every person in England and Wales on a map". 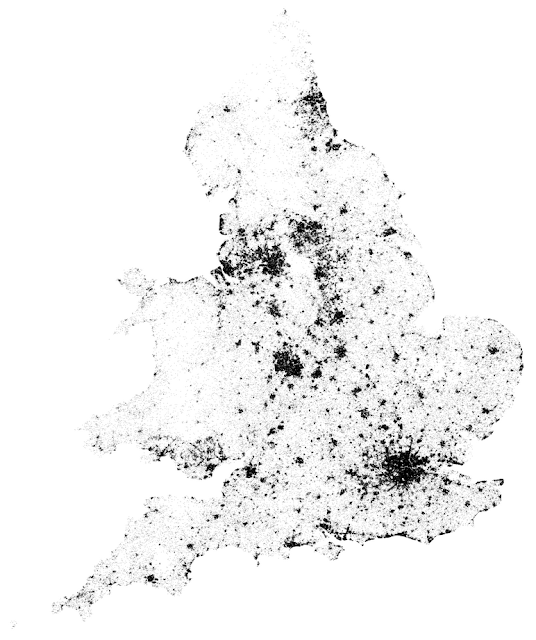 There isn't much information about the map's construction except each person in England and Wales has been represented with a dot. The data source is the 2011 census. That equates to 56,075,912 dots on the map.
According to The Guardian's Chris Cross it creates a 'beautiful picture of population density across the country" and you can " zoom in to the highest level to see the individual dots". OK then...here goes: 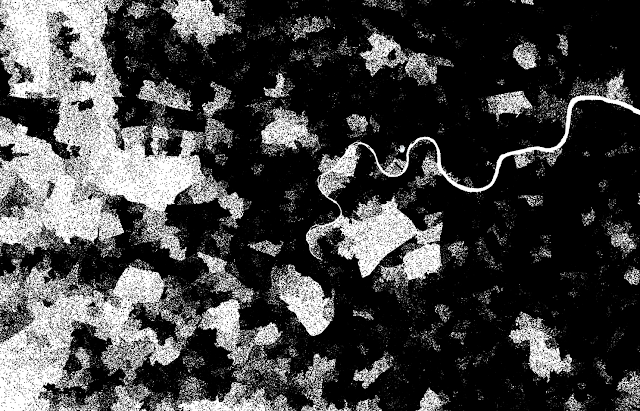 At it's proper size this is the maximum scale which is 1:72,224. I struggle to see individual dots. The reason is simple...the dots are too large so in the areas of most people they are coalescing into an amorphous blob. We have no way of seeing any variation amongst the most densely populated areas. All we get is a black fill for the underlying polygons.  This also creates the illusion of 'totality' in the sense that the area is absolutely rammed with people to the point of there being no room left for anyone else (is this the political point the map maker wanted to make?). Black is never a good colour to use on a map for 'fills'. Leave it for linework and labels....or make your dots sufficiently small so we can see some detail in these areas.

That's not the biggest problem though...

The map above clearly shows that the data has been mapped into boundaries.  These look like wards...the primary unit of English and Welsh electoral geography. It's not the finest scale of geography and it's conceivable they've used data reported at sub-units (e.g. Output Areas). And so the dots are placed randomly within the areas. That's a fairly standard technique for dot density mapping but let's not get carried away. This does not create a picture of population density. Using wards or other arbitrary boundaries means the data is constrained by the pattern that those boundaries create and NOT the pattern of where people live. So I don't find this a beautiful picture of population across England and Wales; I find it a visual misrepresentation of that statement.

The standard technique for mapping census data in wards is a choropleth map which, through the use of graduated colours, would allow us to compare the population density of areas across the country. It might be considered a 'boring' technique, particularly for the media, but it would be useful in this context. Instead we've got randomly placed dots across the entire country including all those areas only populated by parkland...or airports...or reservoirs and lakes...or sheep..or well, the map suggests that people exhaust space but in different densities. People don't.  In fact, many areas on the map will have far lower densities (practicaly zero) and many areas will actually be far more populated.

Here's a few of those land uses in the map extract above... 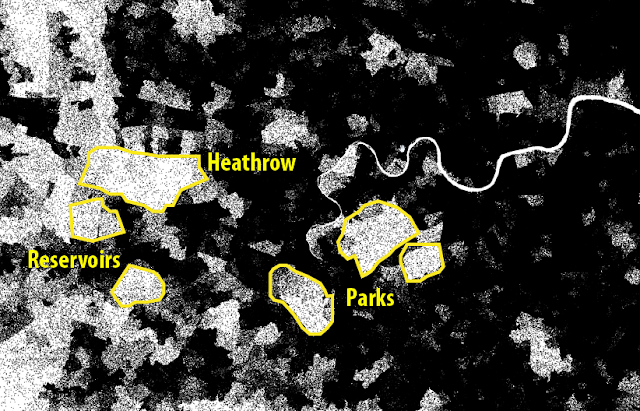 Whenever people look at dot maps, particularly those that suggest each dot is an individual data item (person in this case) the presumption is that the dot is the actual location.  The danger of imputing the characteristics of an area to a finer resolution of data is termed the ecological fallacy and this is manifest in The Guardian's map. They've taken data reported in areas and created a map that at least 'suggests' a finer scale of mapping than the data is capable of providing.  At best we know there are a lot of people in one area compared to another but the map suggests people are everywhere. The arbitrary boundaries of wards create the pattern we see, not the populated surface.

The map really should use a dasymetric technique which takes into account a secondary data set that allows us to position the source data more in line with where we logically know the data exists.  In this case, using urban land use would help. Using residential land use (because that's where the census reports location) would be even better. Additionally, mask out all the parks, airports and unpopulated areas and THEN use the dot density technique to distribute the dots in those new areas.  That's the technique I used for the dasymetric dot density map of the  2012 Presidential election data. I also avoided the ecological fallacy by deliberately NOT using 1 dot to symbolize 1 vote because I have no idea of voting patterns at that scale.  I left it at 1 dot is 10 votes.  I perhaps stretched things even then and maybe should have left it at 1 dot is 100 votes.  Either way...the map shouldn't suggest more than the data is capable of showing.

The point here (no pun intended) is that accurate mapping requires quite a bit of data processing.  It requires thought and, often, further data than simply the item to be mapped. It requires a knowledge and understanding of what you're doing and the limitations inherent in the technique and how you're crow-barring the data into it.

And the biggest problem of this sort of maverick cartography is the fact it gets huge readership.  It appears in a national publication, on a web site with large readership and is promoted by twitter accounts and blogs with large followers.  I've said before that one of the big dangers in modern cartography is that we're seeing even more maps made by people who are unaware of basic techniques who produce maps consumed by the uninitiated.  Cartography is important.  The point of cartographic techniques is to marshal the way we map in a way that avoids misinterpretations.  Cartography is not a set of rules to constrain innovation or stifle experimentation...it's a guide to ensure that the map's meaning will be interpreted accurately.  The Guardian have failed massively.  While what they've created isn't in itself wrong, the way it's presented is what causes the confusion.  Maps like this should have a series of caveats to accompany them so the rest of us don't make false assumptions. Honest cartography would be a good start.  Instead, these sort of maps seem to be made because the author has found a way to make them...thus solving a technical challenge.  In so doing they may get a viral map; they may be seen as innovative. Very few question the value of their cartographic approach but if we're to improve the honesty in modern cartography then we need to see these sort of maps be published with a greater sense of caution about what they show rather than the fanfare of technical triumphilism
Posted by Kenneth Field at 09:01