In much the same way as my pet carto-peeve is non-normalised choropleths, my carto pal Anthony Robinson (@A_C_Robinson)'s is rainbow coloured maps. More specifically, rainbow colour schemes on thematic maps. "Rainbows kill people so stop using them on maps".

Let's not get into that debate but what about maps...

Here's a map from BKLYNR where they've mapped Block by Block, Brooklynn's Past and Present: the construction date of every building in Brooklynn, new York. No mean feat.  Nice bit of data handling and processing.  Then they mapped it using rainbows. 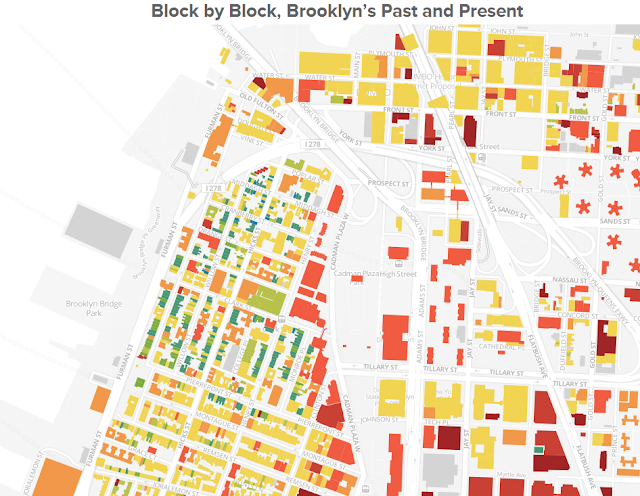 Pretty map...but based on the above, tell me which are the newer and which are the older properties? Actually you can't do that simple analytical task.

The legend helps, of course...but why should blue be old, yellow be turn of the Century and red be new?

This is a perfect example of a colour scheme totally wrecking an otherwise perfectly good map. If the author had used a sequential scheme (say blues, light to dark) then we could have at the very least figured out the relative age of buildings across the map. The only difficulty would have been working out which end of the lightness gradient was new or old. The author states the map can be used to see how development has rippled across a neighbourhood.  Actually, you can't do that. At best you can see which buildings are similarly dated but not how one colour relates to another. 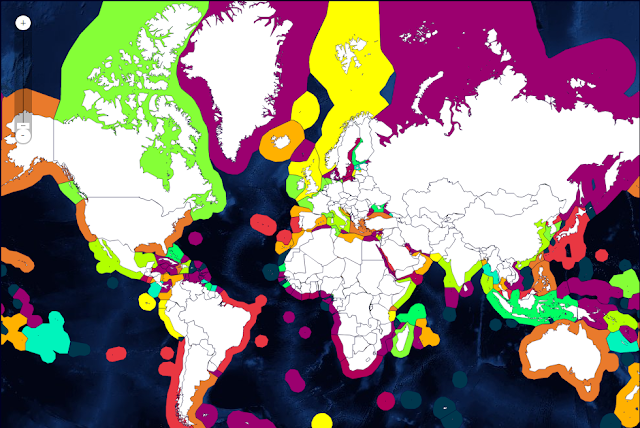 Let's not worry too much about what this map shows other than we can recognise that different coastal zones are somehow different.  But that's actually not the case. in fact, when you look at the legend you see that they are different in a numerical sense.  We're not looking at different phenomena. We're looking at areas that are rated on a percentage scale. The deep plum/reds are low on the scale. Light blues are high on the scale. Yellows again occupy the middle area.

Again, a single hue sequential colour scale would work well here. We could instantly see which is relatively higher or lower on the scale.  We wouldn't need to refer to the legend. The map wouldn't require sunglasses.

And what of the different sized buffers? That is simply an artifact of using Web Mercator. They are, in fact, equal distance buffers around the coastline but of course in the north and south they get distorted on Mercator and that simply gives them greater map real estate and visual prominence.

Whether or not rainbows kill people...I'll leave that up to Anthony to comment. They certainly kill maps.