I don't think it's possible to make a map in isolation of critique. You have to get eyes on your map and listen to people's comments, concerns and (if you're lucky) congratulations. And of course, the closer you are to a deadline the more pressured the situation, and the less likely you are to be able to give people time or to make changes based on feedback.

And so it was when I hurridly finished up my re-imagined version of the London Underground map a few weeks ago. You can read about my original map and a how-to that explains the technical side of its construction. The map needed to be finished and printed in time for me to take it to the Schematic Mapping Conference in Vienna. I was up against it because I was due in Washington D.C. the week before and our production facility also (quite reasonably) needs an amount of time to print it. So I ended up rushing it and didn't have enough time to get enough eyes on it before it would be publicly shared.

I sent it to Cameron Booth who runs the wonderful Transit Maps blog and he provided some extremely helpful comments. Colleagues at work also briefly looked at the map once printed. 'Text is too small' we all cried. Me included. Too late to do anything about it. I went to Vienna where no-one really bothered looking at the map or offered comment. But I've gone back to the map and made changes I believe make it better. So here's the updated map (you can grab a full-sized hi-res version here): 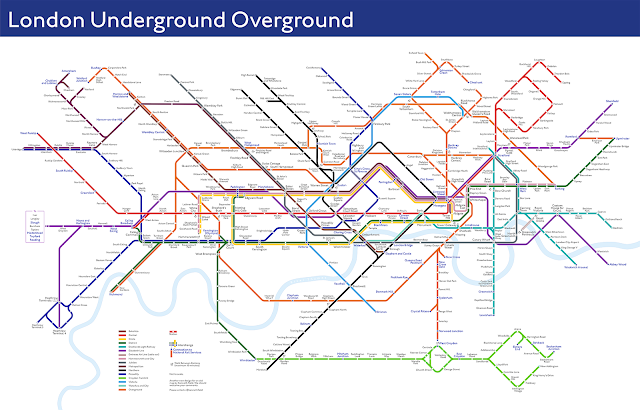 There's larger lettering throughout. The smallest text is now 3pt larger than before. It's more visible and legible. Clarity is improved. I've also introduced text with different treatments to marry to the station functions. Interchange stations have larger text. Stations that connect to National Rail services are both larger and a different colour to match the updated station symbol colour. I've printed it at the same size as the current official London Underground pocket map (22cm wide) and the legibility holds up.

I've avoided the use of a separate symbol to show connections to National Rail services altogether. Originally I wanted to avoid the old British Rail symbol (arguing that international visitors wouldn't have a clue what it was anyway). But despite trying multiple different icons to sit beside the station names it never really worked. Simply encoding the station's different function into the size and colour of the typography and changing the colour of the station symbol itself allows me to do away with the additional symbol altogether.

There's more consistency in terminus symbols where one line folds into another. I just hadn't done a good job in what is quite a unique approach. I'd missed some. These are now corrected.

The previous design was a 'lines first' approach and whilst this second version is by no means a 'labels first' approach there's been quite a lot of moving and reorganising of linework to give better balance and create additional space for the larger labels. I don't think the result deviates too much from my original intent. In fact there's better spacing across the map whereas previously there were a few fairly congested areas.

The Elizabeth Line westward extension stations to Reading now appear in a box rather than on the line itself. I wrestled with this. They can fit into the line but Reading is nowhere near London and it's a fair point to suggest it shouldn't be included on a map that portrays it no further west than Uxbridge or Heathrow Airport. This is a nod to Harry Beck's original designs that used a similar style for edge cases.

I repositioned South Tottenham station below Seven Sisters so that those walking between them would be able to at least understand which is north of the other.

Many of the outer extremities of lines and stations have been repositioned and spaced to try and improve the overall appearance.

The station labels have all been tweaked to improve the consistency of their placement with respect to distances between lines and offsets from station symbols.

So, there you go. This is version 2 of the map. I'm quite pleased with it. I've been able to spend more time with it and appreciate the limitations of the first version. I've taken on board comments and made changes where necessary. I still think I've been able to retain what I like about the official map (colours and typeface) that relates it to the 'London look' but it's develops a new graphical language for pretty much everything else. Version 2 is a better map than version 1 because it's had eyes on it.

As with the first version, I invite people to rip version 2 to shreds and offer comments.Thanks.

PS - And yeah, there's now an Easter Egg on the map. Should have added it first time round but ran out of time and forgot.
Posted by Kenneth Field at 16:18