All Over the Map - a review 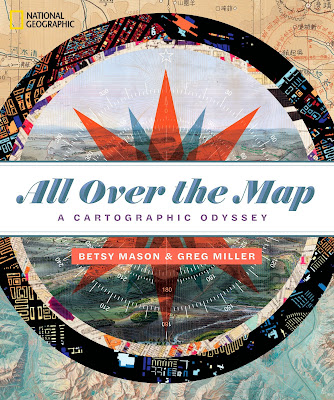 So many large format coffee-table map books are written by map experts, map librarians or map historians. They carefully select the maps based on a criteria that generally relates to some cartographic measure of their worth. Betsy Mason and Greg Miller are not cartographic experts, well, at least not by training, though they are fast demonstrating a deep understanding of what makes great maps tick. Mason and Miller are journalists, award-winning journalists in fact. More specifically they have a background in science (earth science, geology, biological, behavioural, social and neurological science!), and the reporting of science in some of the most august publications and came to cartography via their excellent blog from Wired which they launched in 2013. They now co-author the blog All Over the Map at National Geographic. Is this background on the authors at all relevant? Yes, because what they bring to their interest in cartography is a fresh perspective. They aren’t burdened by having a list of maps that have to go in their collection (you know the ones…we all know them). They have chosen what they want to go in, and so their list is, in the main, a fresh list and contains many maps you’re unlikely to have seen. Of course, there’s some absolute classics such as Mount Everest (1988), published by National Geographic. It appears early on but it’s a book published by National Geographic and they would be remiss not to include such stunning work. But the book goes far beyond the vaults of National Geographic and presents well-known maps side-by-side with lesser known examples. I’m pretty sure even if they had a classic map in mind it’d not make the cut if they couldn’t find something interesting and fresh to say about it.

The book is broadly divided into nine sections that group the maps by theme: waterways; cities; conflict and crisis; landscapes; economies; science; human experiences; worlds; and art and imagination. Think of any map and you can probably position it in one of these broad topics and it gives the book a pleasing structure. It makes it non-linear and that allows a certain element of randomness when you turn the page. Within each section we see both historical examples and contemporary maps. Maps made by government, commercial companies and also individuals just experimenting with some data. I found myself actually ignoring the groups and just going page-to-page from one delightful map to another, sometimes flicking and stopping as if you were thumbing through a pack of cards and stopping randomly. Each page is different and captures the map in rich printed form but it’s the writing that elevates this from just a collection of maps and their makers. Mason and Miller dig into the personal stories of the maps, and the people who made them. They explore the contexts and environments of the maps; and often the trials and tribulations of their circumstance. They reveal far more than the map as a captivating and arresting image. They reveal the often intriguing and personal stories behind the maps. So, in this sense, the book is more of a collection about maps than it is a book of maps. The fact that the maps are beautiful makes it simply a superbly illustrated story book. And it’s important that many of these stories are told because for many, maps just appear, devoid of context. Sure, people may like them but a general audience will unlikely not care one bit about the people who made them and the work that went into them. For instance, we learn of the incredible lengths that Bradford and Barbara Washburn went to create their utterly stupendous 1978 map of the Heart of Grand Canyon. Eight years of planning, fieldwork, analysis, drafting, painting and negotiating to create one map. Every trail in the canyon surveyed several times by multiple people using a measuring wheel to check and check accuracy again and again. Assistants were sent to check Bradford Washburn’s own measurements with strict instructions “if you make a bad mistake, never back up, as the wheel won’t reverse. Just stop and cuss a reasonable amount. Then go back to where you know you made your last reliable measurement.” Even the map’s main relief artist, the inimitable Tibor Toth reckoned he spent 1,074.5 hours to paint the map. I love these stories. They show the very human nature of cartography and the fact that everything on a map is somehow touched by a human whether it’s in data collection, decision-making, design or production. Every mark has the impact of the maker and the craft of their expertise and this book is at pains to reflect that in each piece of writing that accompanies the maps.

As any good reporter will know, the story isn’t about them but it’s about what they are reporting and while there’s clear evidence of Mason and Miller’s love of the subject and the maps they write about, they have gone to great lengths to interview cartographers, curators and scholars linked to the maps and who can provide authoritative knowledge and insight. They’ve gone to the best and, so we are often treated to critique and comment from some of todays most experienced and respected cartographers and map experts. This brings a whole new level of character to the writing because we’re not merely reading descriptions, we’re reading a reflective piece that draws many pieces of information and views together. They’ve marshalled their interviews into consistent reportage as if they are simply the eyewitnesses to the stories. They write in an accessible and engaging style for a general audience. While there’s plenty to delight the knowledgable cartographic expert, the book will also reach a wider audience merely interested in some of the stories which they can access without having to interpret cartojargon. The layout of the book is also appealing with a loose structure combining maps and text as appropriate. Each illustration is provided with a detailed description so you’re guided through each entry by the main text and the annotations.

There are around 300 illustrations in the book and it’s hard to provide a definitive list of the type of content but there’s maps (obviously), diagrams, photographs, postcards, illustrations, paintings, posters, globes, atlases, examples of work under construction and so much else that helps paint a picture of the context of the maps. For instance, how many have seen the magnificent world ocean floor map by Austrian artist Heinrich Berann? Plenty. But the six pages devoted to this map includes photographs of the map’s scientific authors Marie Tharp and Bruce Heezen hard at work plotting soundings, transect profiles of the Atlantic Ocean, a wonderful physiographic diagram of the Atlantic drawn by Tharp herself which demonstrates the plan oblique approach then painted by Berann. Together the illustrations help tell the story of the famous map. There’s a nod to the work of Minard though with a focus on some of his less famous but equally wonderful statistical thematic cartography. And there’s even one of my colleague John Nelson’s maps: his lights on/lights out map showing the changes in nighttime illumination between 2012-2016. This fact alone demonstrates the efforts Mason and Miller have gone to in order to represent the full gamut of cartography which is no mean feat in 320 pages. Since the book is organized thematically there isn’t the usual old to new flow either. We see historic examples intermingled with contemporary and vice versa. It works well and you can pretty much just flick open a page and dive straight in. No, lose yourself just exploring and saying to yourself, oh go on then…just one more page.

It'd be pretty difficult to review the breadth of maps in the book to give you a flavor even. Let’s just say Mason and Miller have got you covered whatever your map vice is. So whether you like the painstaking detail of beautiful topographic maps, the imagination of celestial charts, the analytical representation of statistical data or the fantasy of the map of Westeros or the Death Star then there’s plenty in this book to feast on. Hand-drawn, pixel pushed, sewn or plotted from the smell of a place, I’m struggling to think of a phase of cartographic history, design aesthetic or production method that isn’t covered somewhere in the book. That’s quite some achievement and it makes this a really comprehensive compilation that reflects the rich variety of cartographic work. I’d like to say that the book is a bit U.S. centric but it isn’t really and anyway, who would care if it is? I mean, London A-Z is well represented just as much as Soviet maps of Washington D.C. There’s plenty of great maps of the US but there’s maps of pretty much every part of the world as well. So they’ve even made a book that covers the world geographically too.

I’ve worked with Betsy and Greg on a few of their projects over the last few years and come to know them as hard working, meticulous and honest people.  Reporters often get a bad name for being a bit lackadaisical and missing those crucial details that the experts of the content sweat over. But that’s not my experience with these two passionate reporters who want to find and deliver quality in their work. They have a knack of finding a story and what they bring to this book is a new perspective on the maps they’ve chosen. Even familiar maps are given fresh life and their style gives a modern take on the process and practice of cartography and the maps we make. I guess my only real surprise, rather than a criticism, is that the book wasn’t subtitled ‘Volume 1’ because I, for one, hope that they are already delving through National Geographic’s archives as well as the wider world of cartography to bring us a second collection at the very least. Maybe next time I’ll get a map in because that’d be a huge privilege and it’s possibly the biggest acclaim I can give to the book that I’m jealous that I haven’t yet made anything worthy enough to be considered. That makes me want to try harder as I hope for the next installment of their cartographic odyssey.

All Over the Map: A cartographic odyssey

Full disclosure: I received a free copy of the book for review from the publisher though there was no requirement to write a review, positive, negative or indifferent. I also acted as an advisor to the book albeit I can’t recall precisely what and am sure it was a miniscule contribution, a fleetingly brief conversation and pretty much irrelevant to the final product anyway. But you’ll find my name in the acknowledgments so it’s best to mention this.