Sharing or Showing Off...you can't have it both ways.

Interesting debate emerging today with the discovery that software games producers Naughty Dog have seemingly used a map from the interwebs without seeking permission or arranging for royalties to be paid to the owner of the work.  Check out the Tumblr and comments by the map-maker Cameron Booth (@transitmap) whose map it is below (reproduced under fair use...I think!): 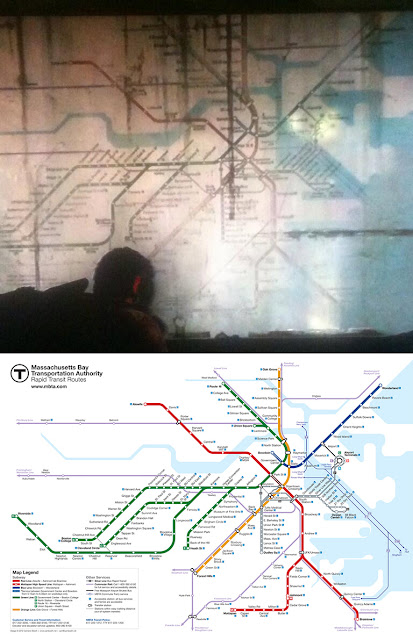 Cameron built a new map to his design of the MBTA rapid transit system. Looks remarkably like an official map, takes a hefty dose of design cues from the official one and many others derived, ultimately from Harry Beck's iconic 1933 London Underground map (which of course, itself has design cues you can trace back even further that questions his own innovation or lack thereof).

Mr Booth is unhappy his map has been re-used without his permission or the exchange of money. On one hand I can very well understand his upset. It's his work. It's been stolen and re-purposed without anyone even having the courtesy to give him a call. On the other hand, isn't this a case of pot calling kettle black? His map wouldn't exist without those that went before it. He made his map and shared it, hoping for it to be picked up on a wave of internet 'likes' to either become something MBTA might want, as a showcase for his talents or just to prompt discussion on the design of transit maps. Presumably he enjoyed all the positive comments his very well crafted version elicited but when it's used in a way he hadn't envisaged the reaction is the exact opposite.

The simple point here is no-one is unique and if you put your work out there it's bound to get bad press and be mis-used from time to time even if it doesn't deserve it. No-one's work is that innovative it transcends all others so we have to be a little less precious about what we have a right to claim ownership of. We can recognize design elements from many different works if we look close enough in most maps. A good cartographer will learn what works, what looks good, what communicates and fashion something that brings together those elements in a clean, clear and well structured product.  Those not as capable tend to produce clumsy work, unable to bring together ideas from a range of sources. Then there are the blatant rip-offs. All work is a function of what has gone before and contributes to a continuum. We can normally see a very clear lineage in maps and only in very very rare cases can we genuinely look at something and say it's truly original. That being the case we need to apply the same caution when sharing our own work.

I also had a dose of this today. I've been preparing maps as part of my day job so that I can show those who use a certain software platform how to create high quality cartography, often going beyond the defaults and using custom tools and techniques (I'm not going to name them because this isn't a blog about my day job). I posted a screen shot of part of one such map and got what seemed a less than enthusiastic response from someone who appeared to be questioning my right to produce the map because it has a similar look and feel to one he had also created (again, no names because this is written without his input).  I happen to be an admirer of his work and yes, I had seen the map before....but does this mean I have blatantly copied it? No. Different data, different results and a different purpose.  Where they are similar is in their use of the same general technique (hex binning), the same colour background (white...like many maps) and a yellow-blue colour scheme for the symbols (again, like many maps). Their version is a single scale, mine a multiscale. They wrote a blog explaining how it was built using a certain set of tools. I'll be using my map to demo a different set of tools.

No-one holds the rights to cartography and by demonstrating how such maps can be created I take the view that I'm sharing 'best practice'. I give shout-outs to other work that I consider to demonstrate best practice in cartography (whether they use the same software stack or not) and encourage people to look at such examples to develop an appreciation of the current cream of the cartographic crop. I could have used a different colour scheme and maybe that would have been sufficiently different not to cause a reaction but where do we draw the line? Should I never again create a choropleth map using an orange sequential hue scheme again (actually...probably not but for other reasons!)?

It seems to me that the internet is breeding a mindset which on the face of it seems open and sharing but when you appear to get too close to what someone else has shared it can easily kick off. Cartography isn't copyrighted. Neither are white backgrounds or colours. Neither are hexagons...as I've had to write about before. Give credit where credit is due and cite your inspiration and ideas. By sharing best practice we're encouraging people to work towards making better maps which does a service to cartography as a whole.  By having choice they can make use of a variety of software stacks and do their work in a way that suits them. But we cannot take the view that having publicised a map and a technique that we then get irked if someone else benefits from the work. I wonder sometimes if the Open Source movement are partly to blame for this cultural mindset. The idea of sharing (normally for free) is fantastically altruistic but ultimately we all survive off the quality of our own work and while striving to be seen above the crowd we can often get caught up in our own hype. Do good work. Share it. Be happy if people like it and make use of it for positive reasons. If you share your work and its good, don't be surprised when others find it useful and make use of it for the benefit of others. If you feel like your work has been ripped-off then step back and wonder if it's possible that the ideas can actually be traced a little further back. Chances are you weren't the first...and I won't be the last. We simply cannot have it both ways.