So many people have asked me for a copy of my map of the world of football so...here it is! Feel free to download and print the map for your own use. Downloading it accepts the simple conditions that you are not allowed to forward the digital file or print copies for sale or profit. I'm giving this away freely so I ask that you respect that principle. 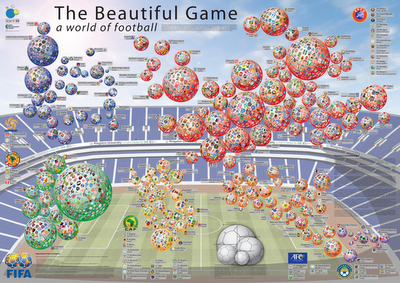 I created the map to provide a unique view of 'The Beautiful Game' , a synonym widely used to describe the world of football/soccer. A map of the world is transformed into a Dorling cartogram that emphasises the main football playing nations and federations that represent them internationally.

Each country is represented as its own football, scaled to reflect the number of professional football teams that play in the country. The badges of teams fill each symbol creating a colourful, vibrant tapestry of club football that locates the world's major clubs and which gives a unique view of the spatial pattern and concentration on a global scale. The use of a cartogram provides increased space to locate club badges for national federations that have numerous clubs, shrinking those areas with fewer clubs which creates a way of accommodating the distribution appropriately for display.

The country footballs have been placed inside the backdrop of a football stadium and the etymology of the word 'football' is represented through national association to truly demonstrate the global appeal and cross-cultural nature of the beautiful game. This map is not in any way affiliated with any of the organisations shown and represents a purely artistic endeavor.

With thanks to my former students Michael Graves and Fabio Palacios who helped build and organise the club and logo databases.
Posted by Kenneth Field at 09:39